‘Bless His Heart’: Remembering Tom Wolfe, ‘A Man In Full’ and Wolfe Watch

As he exited the editorial meeting, I could make out my editor’s hangdog expression clear across the Atlanta Journal-Constitution’s 8th floor newsroom. “So, this Wolfe book,” he told me, sighing. “Apparently, we need to hyperventilate all over this thing for the next week. So, do me a favor — get it, read it and get ready.”

It was the week before Thanksgiving in the fall of 1998 and Atlanta was serving as the star of — and the punchline for — writer Tom Wolfe’s new novel, “A Man In Full,” his latest 742-page social satire in which he threatened to do for Atlanta what he did to New York City in his 1987 bestseller “The Bonfire of the Vanities.” After years of visits to our city to research (i.e. eavesdrop) with Atlanta friends Mary Rose Taylor, a former TV news anchorwoman and her Buckhead real estate developer husband Mack Taylor introducing him around town, Wolfe’s long-awaited and end table-sized ode to Atlanta was about to hit book shelves.

As word spread of Wolfe’s death this week at age 88, many longtime Atlantans have been reflecting on Wolfe’s literary misadventures in our city, 20 years ago this fall.

Back in 1998, unlike William Tecumseh Sherman, the last guy to torch our town, Wolfe was scheduled to return to the scene of his crime and do doughnuts all over our manicured lawns on a victory lap in Atlanta to officially launch the $30 tome.

Since Wolfe’s two-and-a-half day visit neatly intersected at the corner of the philanthropically minded rich people parties and the snark-saturated pop culture landscape I covered as part of my beat writing the paper’s popular Peach Buzz column, I was automatically added to the Wolfe reporting team. Since I enjoyed being employed, I accepted my fate.

But despite the drool cascading down the jaws of the salivating editors upstairs, I had little appetite to be another wheezing PR organ for the book.

The reason the Peach Buzz column resonated with the AJC’s readers each morning and afternoon was a decision made early on to always serve as an extension of those readers, most of whom were in my income bracket and not the Gucci-clad glitterati I covered. The column worked because we wrote it from the little guy’s perspective, giving them access beyond the velvet rope and into the parties, all while remembering I was invited to such social gatherings strictly because the billionaire family I worked for bought ink by the barrel and purchased forests full of paper.

So, as Wolfe, his white suits, his wife Sheila and his Farrar Straus Giroux publicist boarded a jet South, my editor Eric and I came up with Wolfe Watch, a tongue-in-cheek daily update on all things “A Man In Full”-related. It was explicitly designed to capture the insanity of our moment in the literati sunlight and to inform and entertain readers, all while preserving our jobs.

With Atlanta’s lingering post-Olympics self-esteem issues, Wolfe’s attraction to us as a Southern fried comedic foil was difficult to dismiss. We were as ripe for the plucking as a bushel of our spherically shaped state fruit. Still, not everyone was onboard. Getting wind of Wolfe’s fictional broke Buckhead developer Charlie Croker, former Atlanta mayor Sam Massell and his powerful Buckhead Coalition had rescinded an invitation for the author to address their organization. Perhaps hearing about the novel’s Georgia Tech running back character Fareek “The Cannon” Fanon (accused of date rape in the book) and the author’s overall depictions of race throughout the book, Atlanta mayor Bill Campbell was MIA for the Wolfe love fest.

The AJC even dispatched a reporter to Hartsfield International to meet Wolfe and entourage as he arrived (this was back in the olden days when pesky reporters could loiter at airport arrival gates and pepper world famous writers with questions without submitting to a TSA body cavity scan).

There was a lavish $600 a plate black tie dinner in Wolfe’s honor at the Atlanta History Center, benefitting the Margaret Mitchell House. A thousand copies of “A Man In Full” were awaiting Wolfe at his Buckhead Borders book signing where an LSD-free “Electric Kool-Aid Acid Test” drink refreshment stand had been erected. Wolfe made multiple appearances on CNN, sat for an interview with WSB-TV Action News anchor John Pruitt, was feted at an Atlanta Visitors & Convention Bureau breakfast at the Four Seasons hotel, a Piedmont Driving Club luncheon (where he set a Freaknik-related traffic jam in the novel) and chatted up the hosts of Star 94’s Steve and Vikki Morning Show. In short, the man in full was, well, everywhere.

“The book isn’t pro Atlanta, it isn’t anti Atlanta,” Wolfe told the 500 attendees at the Atlanta History Center. “I hope it is Atlanta.”

In honor of Wolfe’s reportorial writing style, I did a little eavesdropping at dinner that night and scribbled down some priceless commentary in my reporter’s notebook: “My wife and I drove to Charleston last weekend reading the book to each over. We finished it. I didn’t know Charleston was such a drive.” “How far are you in the book?” “I read the acknowledgements and had to take a nap.” And my personal favorite: “He thinks he can jet in for a few weekends in Buckhead and then write about what’s wrong with us? Bless his heart.”

At the press conference held before dinner, I was unsuccessfully jockeying for position next to national TV cameras and the New York Times Atlanta bureau chief. Finally, Wolfe spotted my extended orangutan-like arm and called on me. As soon as I stated my name and media affiliation, Wolfe’s eyebrows shot skyward and he excitedly clasped his hands together.

“You’re the fellow writing the Wolfe Watch column!” he exclaimed. “You make me feel like The Beatles landing in America in 1964!”

I stared at him, incredulous. “I was a reporter at the New York Herald Tribune at the time,” Wolfe went on to wistfully recall. “And all day long we’d get these bulletins, ‘They’re over Greenland now… They’re coming over Nova Scotia!’ Thank you, Journal-Constitution. You’ve made me feel great!”

Turns out, not only could Wolfe dish out the social satire, he could consume a little sarcastic spoofing as well. Later, before boarding his flight for Florida, Wolfe spotted me, stuck out his hand and offered a quiet thank you, adding with a grin, “I hope you don’t stop Wolfe Watch for the small reason I’m leaving town!”

And then, in a final whirl of whiteness, Wolfe was gone.

As Thanksgiving gave way to the lighting of the Rich’s Christmas tree that year, I had resumed my Elton John celebrity stalking duties when one afternoon, a Fed Ex package arrived at my desk.

Inside, was a copy of “A Man In Full” with an inscription: “For Rich Eldredge, Your Wolfe Watch made my decade! Tom Wolfe.” 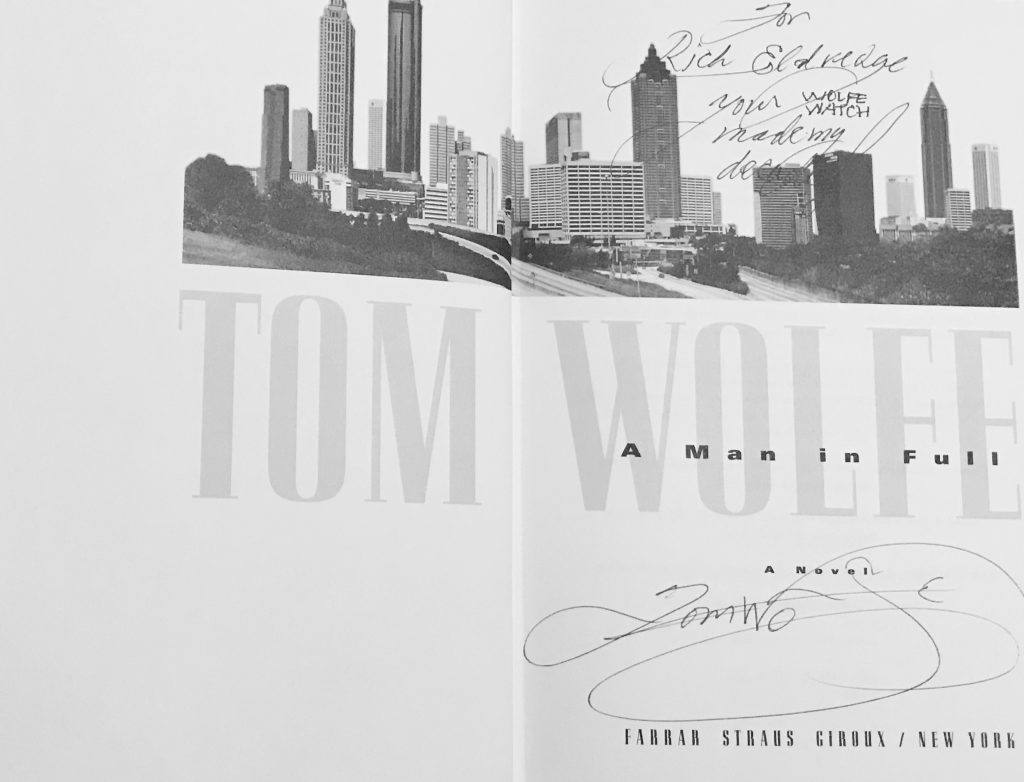