After 20 Years, Mitchell Anderson Returns to TV for ‘After Forever’

MetroFresh chef/owner/cookbook author Mitchell Anderson didn’t go searching for a return to acting. The part literally came looking for him. In 2016, his friend, actor Kevin Spirtas (perhaps best known for playing Dr. Craig Wesley on “Days of Our Lives”) called and asked if he could send him a script he had written with him in mind. The result, the poignant, romantic eight-episode series “After Forever” is now streaming on Amazon. Spirtas and Anderson portray Brian and Jason, a married couple in love and tackling middle age until Jason receives a dire medical diagnosis that upends their relationship.

Shot on location in New York City in the spring and summer of 2017, the web series is frank, funny and sexy — and it’s generating some of the most passionate reviews currently being posted by fans on the Amazon website.

Tonight at 7, both stars of “After Forever” will gather at The Plaza Theatre, along with co-creator and co-writer Michael Slade to screen all eight episodes of the 85-minute first season for friends and MetroFreshuals from across Atlanta.

On Sunday, I sat down with Anderson at the Atlanta home he shares with Atlanta salon owner/photographer/unofficial stage hubby Richie Arpino (and the host of tonight’s screening soiree) to discuss his first on-screen role in 20 years, why he said yes to the project and how his latest role adds to a trailblazing career as one of the first pre-“Ellen” out actors living and working authentically in Hollywood.

Eldredge: How were you contacted about this project and why did you decide to say yes?

Anderson: I’ve known Kevin Spirtas since I moved to Los Angeles in 1986. We were in an acting class together and we’ve been friends ever since. When he and Michael Slade, his co-creator and co-writer created this project, he apparently just always thought of me to do it. So about a year and a half ago, he sent me the script. I was very moved by it. Plus, it was a great part. It’s incredibly rangy. I’ve hardly ever had an opportunity to do this range of work on screen. I told him I was in.

Eldredge: One of the things I love best about “After Forever” is it demonstrates how actors can create roles and vehicles for themselves in 2018. When you and Kevin were starting out in television, actors typically worked on a show for one of three networks. Was it frightening or exhilarating to break free from the traditional norms?

Anderson: I hadn’t even been onscreen in so many years and in the interim, had created this whole new career for myself that I’ve been working at now almost as long as I acted. I noticed that just the work was better which makes sense become I’m older and hopefully more comfortable with everything. But it was also freeing. It was great to not need anything from it. I never had that nagging voice in my head. As I finished each day, I felt great about the work because I didn’t have to worry about anything. It was a great life experience.

Eldredge: So many actors have to think about how each role will affect their next job. But you knew you were getting on a plane to fly back to a successful life and career.

Anderson: Right. I knew I was going to get to come home and go into the kitchen at MetroFresh and chop onions, create soups and salads and feed people. In the years since I left, show business has changed so much. It was incredibly freeing for someone like Kevin, who has been in the business nonstop to create his work, to get to shoot it, not have to ask permission from a network and get a group of like-minded people together to bring this to life. The cool thing about this project is it’s about adult people our age going through adult things.

Anderson: I know it was incredibly important for Kevin that he showed us as sexual beings, as passionate people, as sexy even. Well, hopefully! 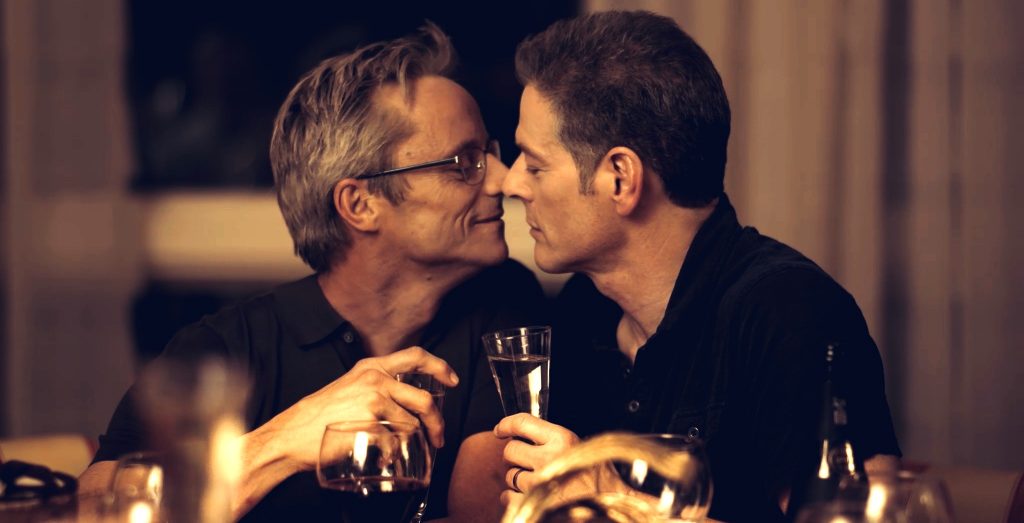 Eldredge: Because of the AIDS crisis, so many gay men didn’t reach middle age. For people of a certain age now, this series really speaks to them. Your character even has a line…

Anderson: Right! “All those years of safe sex couldn’t protect me from this?!” That’s so true! Fifteen or 20 years ago, there was one script or storyline for gay men — you contracted AIDS and you died. But these characters are facing something else. It’s incredibly relatable. In real life, I’ve had two friends my exact same age die from heart attacks.

Eldredge: Shooting something like this, did it provide more freedom to try different things, to improvise?

Anderson: Totally. And emotionally, I had more freedom. I wasn’t tied to anything. I was just having fun.

Eldredge: I love that each episode opens with sort of this couple’s dialogue between you and Kevin.

Anderson: Yes, those eight scenes are snippets from our first date together as we get more comfortable with each other. It’s those conversations that you have when you’re getting to know the other person.

Eldredge: It isn’t too shabby having Anita Gillette play your mom either, is it?

Anderson: Or [“The Producers” Tony Award winner] Cady Huffman play my best friend? It was great. That scene when I have to tell her I’m dying?  It was one of the most beautiful scenes in the script. It was the first day I worked with Cady. So we met in the morning and there’s a line in the script where I say, ‘At my memorial, I want you to tell the story of how we met.’ So I actually told Cady the story of how I met my best friend Annie and it gave us this instant sort of thing between us. It was just lovely. I still get emotional thinking about that.

Eldredge: Most actors dream about having a great death scene. How did you react when you got to that scene in the script?

Anderson: I’ve actually died in a lot of things (laughs). My most famous death was in [1987’s] “Jaws: The Revenge!” My name was in the main titles, Lorraine Gary is the star and I’m in the first 10 minutes, playing Sean Brody, the younger Brody son. I go out into the harbor and since it’s ‘Jaws,” suddenly there’s a shark. 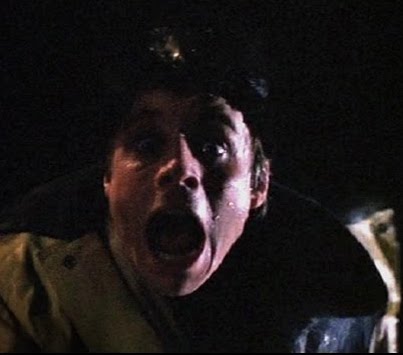 Eldredge: Please tell me the John Williams score is playing.

Anderson: Oh, of course! I was also in a [1988] horror movie called “Deadly Dreams” and it was a fantasy sequence but I had my throat slit! I’ve done my share of dying on screen. But honestly, what’s happened in my life the last couple of years influenced how I felt going into this scene in “After Forever.” We’ve lost both of my parents over the last two years and we watched dad die. My siblings have watched the series and it’s pretty hard for them to watch since it mirrors a lot of what we went through. Because of what has happened in real life, I had an image in my head and it was pretty intense.

Eldredge: Creatively, the door is left open here for additional episodes. Your thoughts?

Anderson: I know Kevin would like to make more. It will really depend on how it’s received and how many people watch it. The best-case scenario would be for a streaming service like a Netflix or a Hulu to say, “Yes, that’s viable, let’s finance a second season.” For me, whatever happens is great. If 5,000 or 100,000 people see it, it’s great. It would be interesting to see how Jason would fit into a second season. I just enjoyed doing it and it’s beautiful. And I’m thrilled that the work is really good.

Eldredge: In 1996, you were one of the first actors in Hollywood to not only come out but also to embrace and portray gay characters. What does it mean for you to come back to acting and get to do a role like this in 2018? 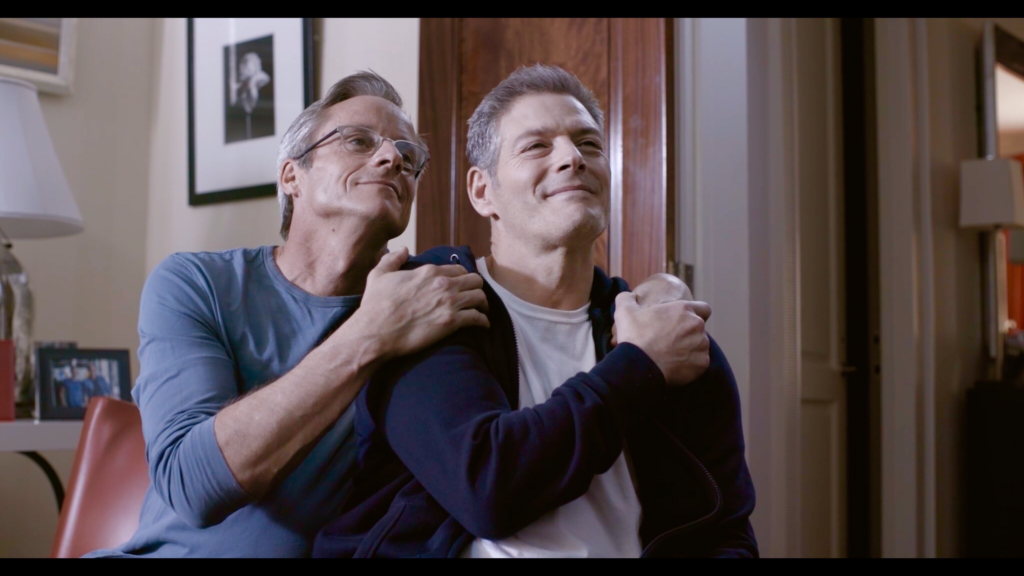 Anderson: It’s an interesting question because I did go through the activism back in the 1990s by coming out and then taking people on that journey. When I moved here [in 2002] to be with Richie, it became what I call ‘quiet activism’ through just living your life. My platform became my neighborhood, it became a restaurant. In a way, it’s a little frightening because in that first scene, I’m in bed with a man kissing him and some of my restaurant customers may tune in to watch that. There’s a bit of a cringe factor for me! However, they know who I am and they know it’s about integrity and integrity of purpose. I’m not trying to shock anybody. It’s also important to show that these two men love each other and have a sex life. I just want people to see it for what it is.

“After Forever” stars Kevin Spirtas, Mitchell Anderson and co-creator/co-writer Michael Slade will join attendees for a binge-screening of the web series Tuesday, May 1 at Plaza Theatre at 1049 Ponce de Leon Avenue at 7 p.m. followed by a meet and greet with light bites by MetroFresh from 8:30 to 9:30 p.m. A suggested donation benefits the Atlanta Film Society. “After Forever” is streaming now on Amazon.

‘A Bullseye on the Back of His Suitcoat’ — Andrew Young Recalls MLK’s Final Days in ‘Memphis Facing The Cross’ ‘Bless His Heart’: Remembering Tom Wolfe, ‘A Man In Full’ and Wolfe Watch