With an Uplifting New Album and Tour, Candi Staton is ‘Unstoppable’

With “Unstoppable,” soul legend Candi Staton’s 30th album out Friday, the singer has created the perfect album for these troubled, Trumpian times. The record is filled with empowering anthems written by Staton, including “Confidence” and “Revolution of Change,” along with her soulful interpretations of Nick Lowe’s hit for Elvis Costello “(What’s So Funny ‘Bout) Peace Love and Understanding?” and Patti Smith’s “People Have the Power.” And with songs like “Love Is You,” the collection also feels like a warm embrace from a trusted and wise friend you’ve known for decades.

Indeed, “Unstoppable,” is a testament to how far Staton, 78, has come in her half century of stardom. At points, the song cycle serves as a love letter to her younger self, who 50 years ago this summer began recording a series of iconic soul sides at Fame Records with producer Rick Hall in Muscle Shoals, Alabama. The 2018 Staton might be telling that 28-year-old woman in the vocal booth, hoarse and struggling to get through the 100th take of “I’m Just A Prisoner” and “Someone You Use,” to hang on, the #metoo movement is coming.

Produced by Mark Nevers, who also produced Staton’s critically acclaimed 2006 album “His Hands” and her 2009 follow up “Who’s Hurting Now” and co-produced by her son and drummer Marcus Williams (the singer’s son Marcel Williams plays bass on the project and daughter Cassandra Hightower contributes backing vocals), the album honors the singer’s Muscle Shoals roots while pushing her sound forward in fresh but soul-steeped musical directions.

Or as Staton herself more succinctly says, “I wanted to create an album that gets you dancing when you get out of bed in the morning, a record that makes you feel good.”

As an added treat for Atlantans, the Georgia-based performer will introduce songs from “Unstoppable” during a rare hometown gig Sunday night at City Winery. The concert is part of a national tour to support the new album. The singer is just back from the U.K., where she performed as a headliner on the summer music festival circuit in London and Glasgow.

Before she jetted off to the U.K. this summer, I sat down with Staton, Eldredge ATL’s August Guest Editor, to discuss her new album, the young people who inspire her about the future and the one glass ceiling shattering disco anthem she might be willing to trade for her own iconic 1976 mirror ball mainstay “Young Hearts Run Free.”

Q: As soon as I put “Unstoppable” on, I immediately felt better about the world we’re living in right now. It’s like you’re taking each listener by the hand and saying, “We’ve got this!” What inspired you to put so many uplifting and reassuring songs together?

A: Like a lot of us, I wake up each day not wanting to turn on the news because I don’t know what to expect. I turn on the news and think, “Dear God, I’ve never seen anything like this.” And I’ve lived a while. With “Unstoppable,” I wanted to create a record like the Staples Singers were making back in the 60s, back in Dr. King’s day. It’s a cultural and societal thing, but with soul. A record that would inspire people.

“Revolution of Change” was one of the songs I wrote in response in Trayvon Martin and the hurt I saw his family was going through. We’ve got to love one another. We’re all human beings. Some of us may wear a blue suit with a badge but we’re all still human beings. We’ve got to take the time to understand and love each other.

Q: I Love the line “Stop living in a bubble, thinking everything is fine.” Can you talk a little about your writing process?

A: Sometimes, the words are coming faster than I can get them down so I sing them into my phone and then put it on paper and finish it. That one, the words just came from my fingers. They came really fast. But then I took a look at it and thought, “Wow, that’s not bad. I told a story.” 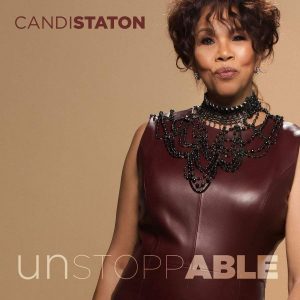 Q: The album’s title comes from a lyric of the album’s opening track, “Confidence.” What inspired you to write such a catchy and reaffirming anthem?

A: Honestly? I wrote it for me! (laughs). I wrote it to encourage myself. Sometimes, you get so discouraged by people, by peers, by churches, by pastors. I know they might not know it, but words hurt. Things like, “You’re getting too old, Candi.” “When are you gonna retire?” I wrote “Confidence” in response to all of that.

Q: In a way, it feels like you’re singing this song to the Candi Staton who was in that vocal booth at Fame Studios in 1968 singing those “hurtin’ type” songs as you used to call them, isn’t it?

A: Yes. Back when the men were telling her what to sing and how to sing it. I was so glad when I got behind the microphone and I could do what I wanted for a change. Now, when I get back behind the microphone with [producer] Mark [Nevers] and [son] Marcus, it’s a different story! I get to sing it how I’m feeling it. It felt good to sing “I walk like it, I talk like it, I dress like it, I’ve got confidence. I’m strong! I’m a woman. You can’t stop me. You can’t push me back.” That last line just came to me. I’m not going back. Ever. I’m not the same woman I was in ’69.

Q: Your cover of Norma Jenkins’ 1976 song, “I Fooled You, Didn’t I?” fooled me at first. Having read your 2016 memoir “Young Hearts Run Free: The First Lady of Southern Soul,” I thought you wrote the song about your most recent ex-husband. The song’s lyrics almost exactly mirror your life, don’t they?

A: Oh, yes! (laughing) That’s why I’m laughing at the beginning of the song. I knew exactly where the woman in that song was coming from. I first heard that song in a shoe store in London. Stopped me in my tracks. They brought me that song years ago when we recorded “His Hands,” but we didn’t end up cutting it back then. I’m kind of glad we waited. It feels right for this new record.

Q: Your cover of Patti Smith’s “People Have the Power” beautifully pairs thematically with your songs “Revolution of Change” and “Stand Up.” How did that all come together?

A: Patti Smith is a poet. “People Have the Power” is a really deep song and “Stand Up and Be Counted” just feels right for the #metoo movement. When I hear it, I see those girls from Parkland [Florida] when they were marching down the street. It’s a song for them and all young people. I have grandchildren and great-grandchildren. It’s going to take the young people to stand up and be counted. Look at those Parkland young people. They’re much more advanced at 15, and 16 and 17 years old than we were. They know how be heard on all of the new technology we have. But they’re also marching. We’re living in a whole different place now.  We’re living in what feels like a war zone right now and if these young people don’t get some fight in them, we will not survive. This is their world and they can shape it in any way they want. And I’m standing right behind them. if they need an old lady to encourage them, send for me. I’ll be there! (laughs).

Q: Can we talk about “The Prize is Not Worth the Pain?” on the new album? 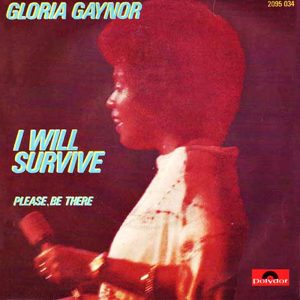 Q: Tracing the trajectory of your career, from those first Fame recordings to hearing you sing “Listen to me ladies, I am somebody — all by myself” on this new album is incredibly powerful.

A: Having been through everything I’ve been through, I always want to bring my story to other women. When I started, there weren’t other women out there singing songs like this. For me, the song that broke the glass ceiling was Gloria Gaynor’s “I Will Survive.” She’s my buddy. We talk about that song all the time. She tells me, “I sure wish I could have sung ‘Young Hearts Run Free’ and I tell her, “Well, I wish I could have sung ‘I Will Survive!’ I tell her, “Girl, you tore that glass ceiling up! You gave us a way out with that song.

See, because there were only male DJs back in the late 60s and early 1970s, female singers were expected to sing those old pleading songs, the victim songs. The “Please don’t leave me, I’ll die, I’m hanging onto your pant leg as you’re walking to the door, even though you beat me” songs. That’s how we had to sell records. They didn’t want us singing positive records. These days, I’m all about making strong, empowering records. I’ll never go back to that pleading stuff.

Q: I’ve been thinking about you and the lessons I’ve learned from you over the years throughout this past year as we’ve watched the women of the #metoo movement speak out and empower other women to come forward. In a way, you’re the godmother of the #metoo movement. You were talking about these issues decades ago. What went through your mind as you watched all that unfold with Harvey Weinstein and the others? 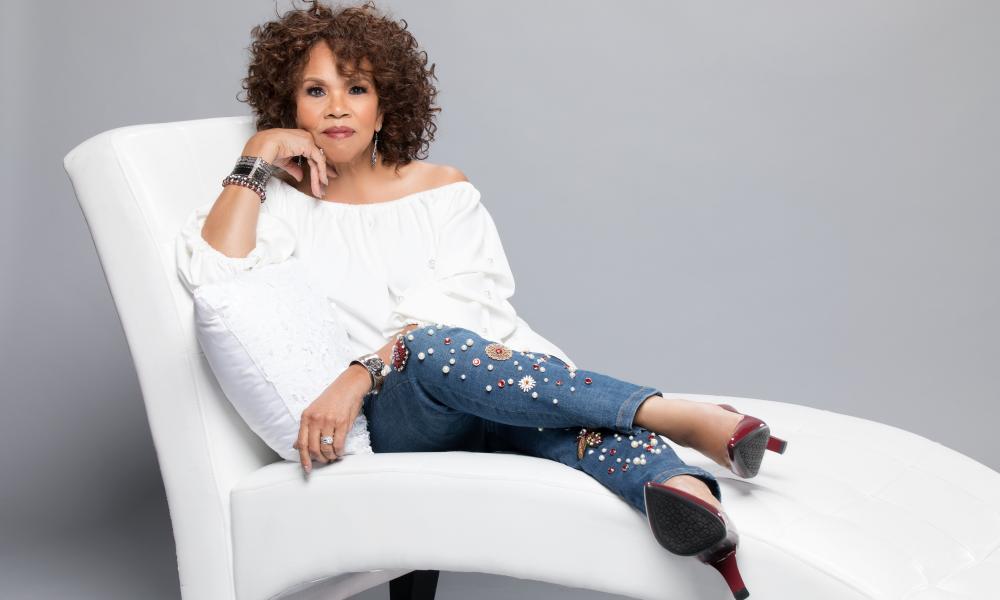 A: I’m so proud of those women. To be honest, I did a dance. Thank God, it’s finally coming around. This has been going on forever. And not just in the film business but the music business as well. They used to say you had to sleep your way to the top and in some cases, women did. I didn’t. That’s probably the reason I never became a quote unquote superstar. People came onto me, saying, “Candi, I’ll make you this if you do that.” I told them, “I have kids at home and I’ve got to set an example for my children.” I would get out of it by playing dumb and country. I’d say, [drawling] “I’ll see y’all later,” just to get myself out of there. But then, my records would go straight down and off the charts. Men expected things from you and if you didn’t do what they wanted, you paid the price.

Q: With the momentum and change initiated by #metoo, do you feel like we’re finally turning a corner?

Q: You ended up sacrificing a lot, didn’t you?

A: I’m sure if I had I done some of the things that were expected of me, I would have had number one records every year and I would have been playing Vegas and Lake Tahoe. I probably would have been where people like Diahann Carroll were career-wise. I was propositioned many times. But that’s how it was back then. For me, it was more important to do things on my terms.

Life Lessons From Aretha and the Art of the Backwards Exit Shimmy Ghostface Killah, Westboro Baptist, Megan Phelps and the 15-Year Journey to Bring ‘The Laramie Project’ to Atlanta