There’s a moment in writer-performer Mark Kendall’s one-man sketch comedy show “The Magic Negro and Other Blackity Blackness As Told By An African-American Man Who Also Happens To Be Black” that brilliantly illustrates the gravitas of the entire 75-minute show. In the sketch, Kendall’s fictional future Cobb County (the one where residents finally vote to approve MARTA train service out to the home of the new Atlanta Braves stadium), a team of robbers is about to hop on the train to knock over a suburban McMansion. On the burglars’ must-steal list: high-end electronics, a piano and all the Chobani Greek Yogurt  they can haul (“You know, the good shit!”). The longer the sketch goes on, the funnier it becomes as the robbers plot their get away — involving two bus transfers and a wait at a train station in an attempt to flee back downtown, all while trying to keep the Chobani chilled and sliding a piano through a MARTA station bike gate.

As the roars increase down in the Alliance Theatre’s Hertz stage, so does the thinking among the white folks who drove in from Cobb County for the show. The same folks who might be the children and grandchildren of the city’s original “white flighters” who relocated out to the suburbs when Atlanta’s city limits became a bit too colorful for them 60 years ago. The same folks who, for the last half century, have consistently voted down every attempt to bring the mass transit MARTA system out to the suburbs, citing fears about the increases in crime the train could bring to Cobb County and environs. It’s a sketch that only a native Atlantan like Kendall could pull off.

The sketch simultaneously exposes how ludicrous the crime spike argument is, even as it is slowly and methodically lifting the veil of racism surrounding the argument against suburban mass transit extension. The reason Kendall can comically get away the six-minute routine? He’s one of us.

In short, the Cobb County MARTA sketch makes you laugh, makes you wince and ultimately, makes you examine some of your long-held-but-quite-probably-racially-motivated-beliefs. That’s the real genius of what Kendall is bringing to “The Magic Negro” each night on the Alliance Theatre’s Hertz Stage (The show runs through April 15).

As part of VOX Teen Communication’s annual Take a Teen to Work job shadow experience over spring break (I serve as senior editor at VOX), Druid Hills High School student and VOX teen staffer Khalil Shipman, 16, joined me for a conversation with Mark Kendall about his brilliant new show and how he developed “The Magic Negro” from a Dad’s Garage workshop to its current starring role as part of the Alliance Theatre’s 2016-17 season.

Khalil Shipman: What was the inception behind your show and how did it first start in your mind?

A: As an ensemble member of Dad’s Garage, I had an opportunity to pitch a solo show and an interest of mine had always been representation of African-Americans in the media. I always knew that’s what I wanted the subject matter to be and I knew I wanted it to be a sketch show. I didn’t really want to do the show as myself. I always wanted a character to be the through-line. So that’s where the Magic Negro character came from since he’s so often used to make people feel comfortable. I thought, let’s use that same character to play with discomfort.

Shipman: Can you describe the Magic Negro character a bit?

A: He’s this character type who pops up in American films. He’s usually an older black gentleman who pops up who has all this wisdom. But the moment he dispenses this wisdom, he vanishes. The only reason he’s there is to serve as a guide.

Eldredge: In previous interviews, you’ve stated that at times in your career, you’ve felt like the Magic Negro and that you felt that all discussion of race was off the table in your comedy. When did you decide that your perspective and your voice needed to be added to the conversation?

A: It was about the time I was developing the solo show. I had always veered toward improv but once I started to write and perform these solo sketches, I was able to hone in on the things that were important to me. It was harder to introduce these ideas and concepts about race within a group.

Shipman: How does being from Atlanta influence your comedic style?

A: Probably in a very big way. Atlanta is unique in a lot of ways. This is a city where black people are leaders. A big difference between doing comedy in Atlanta versus say L.A. or Chicago is you’re performing for people who don’t go to see a lot of sketch comedy or improv. That’s good for me as a performer. It makes you work harder in order to connect. 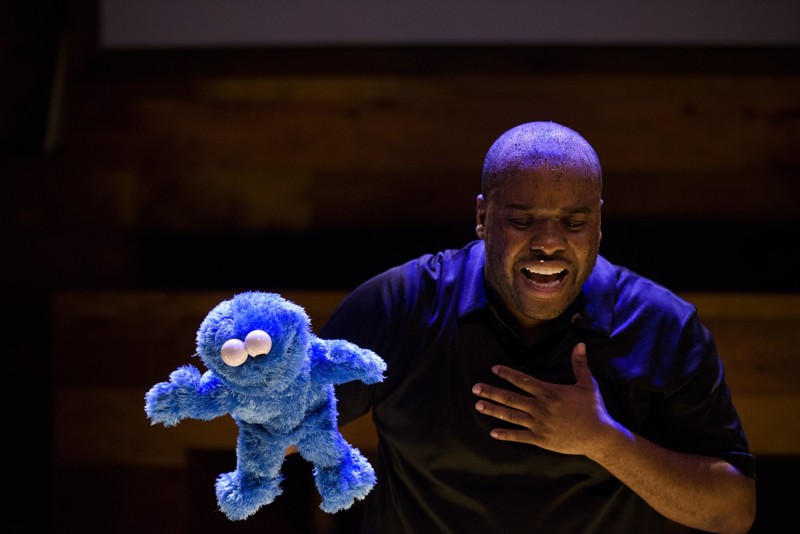 Eldredge: Writer-director Jordan Peele just had a huge hit with “Get Out” and Donald Glover’s “Atlanta” is now a Peabody Awards finalist. Does the success of those projects add fuel to what you’re doing creatively and give you a sense of “I’m doing this at exactly the right time?”

A: I think so. When I see things like “Get Out” and “Atlanta,” I see people trying to create images that are real. Even as wacky as “Atlanta” gets in the best way, it’s also really grounded. The reason “Get Out” works so well is because Jordan Peele sets up such a realistic backdrop. It helps me then, when audiences see the Magic Negro that this guy isn’t real.

Eldredge: Jordan Peele has said that “Get Out” was written for an audience of all races and that he hoped audiences would have a conversation about it afterward. Your show seems designed in much the same way. What do you want audiences to take away when the lights come up on “The Magic Negro,” especially if the audience member looks like me?

Related  The Alliance Theatre Is Holding An Open Casting Call With Kristian Bush and Janece Shaffer. No Pressure.

A: I try not to focus too much on what people take away. Everybody’s relationship with race is very different. I’m trying to use comedy to satirize these stereotypes. But sometimes in doing that, it can become a complicated situation performing that for white audiences. You ultimately have to wonder if you’re doing more harm. The inner turmoil I go through performing the show, I hope that the audience is left to think about what other black people go through every day and make them a little more aware of that.

Shipman: Comedy has always been about social commentary. With our current 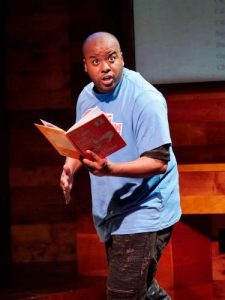 A: I don’t know. That’s a really interesting question. The reason I’m not sure? Comedy is about two things for me: telling the truth and trying to be funny. I think we’re still trying to figure out Trump. [Stephen] Colbert, for example, has gone directly at Trump [on “The Late Show”] and he’s regained relevance as a result. You have comedians out there making informed commentary that may or may not be creating more of a divide. It’s weird to put everyone in the same bucket. Hopefully, you’re doing social commentary in such a way where everyone feels welcome.

Shipman: How does your writing style play into that?

A: My show in particular involves a lot of audience participation where I’m going out into the audience to select people. For the most part, they’re all white people and that’s intentional. But each time, I make sure that I do nothing that embarrasses them. It’s just like doing improv. You always want to make your scene partner look good. There may be uncomfortable things that happen during the sketch but I never set anybody up to fail or look bad.

Eldredge: What’s next for you, your writing and this show?

A: I have a much more stripped version of the show that fits in a backpack that I’ll be taking to some other cities and do 25 minutes to an hour of the show. I’ll continue to do that. As far as doing another full production like “The Magic Negro,” I’d love to do it but there are a lot of factors. I’m just waiting to see what happens next.

VOX Teen Staffer Khalil Shipman recently wrote about why it matters that Marvel Studios cast a teenager to play Peter Parker in the upcoming “Spider-Man: Homecoming.” You can read it here.

Meet Jorge Paniagua, the Guy You Love to Boo in ‘The Bodyguard’ Q&A With ‘Pushing Dead’ Director Tom E. Brown