‘ It’s OK to be who you are’: A Q&A With ‘Saturday Church’ Actor Luka Kain

The powerful and uplifting “Saturday Church,” which had its Atlanta premiere at last fall’s 30th annual Out on Film festival, will have a free encore screening Wednesday night to close out Black History Month. Thanks to Out on Film, the musical starring Luka Kain and Regina Taylor will screen for free at the Phillip Rush Center Wednesday night at 7 p.m.

In January, the indie film was picked up for national distribution by Samuel Goldwyn Films. In the film’s New York Times review, Kain, who in real life is a senior at New York’s LaGuardia High School, is praised as “a real find.”

The film focuses on Ulysses, a shy and effeminate 14-year-old grappling with his sexual and gender identity and being bullied at school, who retreats into a musical fantasy world as he deals with the death of his father and a strict aunt portrayed by Regina Taylor.

In October at the film’s Atlanta premiere at the Plaza Theatre during the 30th annual Out on Film, I had an opportunity to interview Kain, who has also appeared in the Broadway revival of “South Pacific” and been directed in “A Raisin in the Sun” by Phylicia Rashad. Kain, 17, took time out from writing college essays to fly to Atlanta to discuss the film (“If this film doesn’t do anything else, it’s a great college credit!” he joked). Kain won Best Actor at Out on Film and “Saturday Church” captured the festival’s Best First Feature award. The following is an edited version of our post-screening conversation.

Q: Why was it important for you to portray Ulysses?

A: My sister is a trans woman who came out after we wrapped filming ‘Saturday Church.’ It was important for me to tell her story. This film does such a great job showing that even if you don’t have support from your blood-related family, you can discover a found family, people who can effect you just as much and give you just as much love. If you’re scared about whether people will accept you, there are people out there who will love you, no matter who you are. 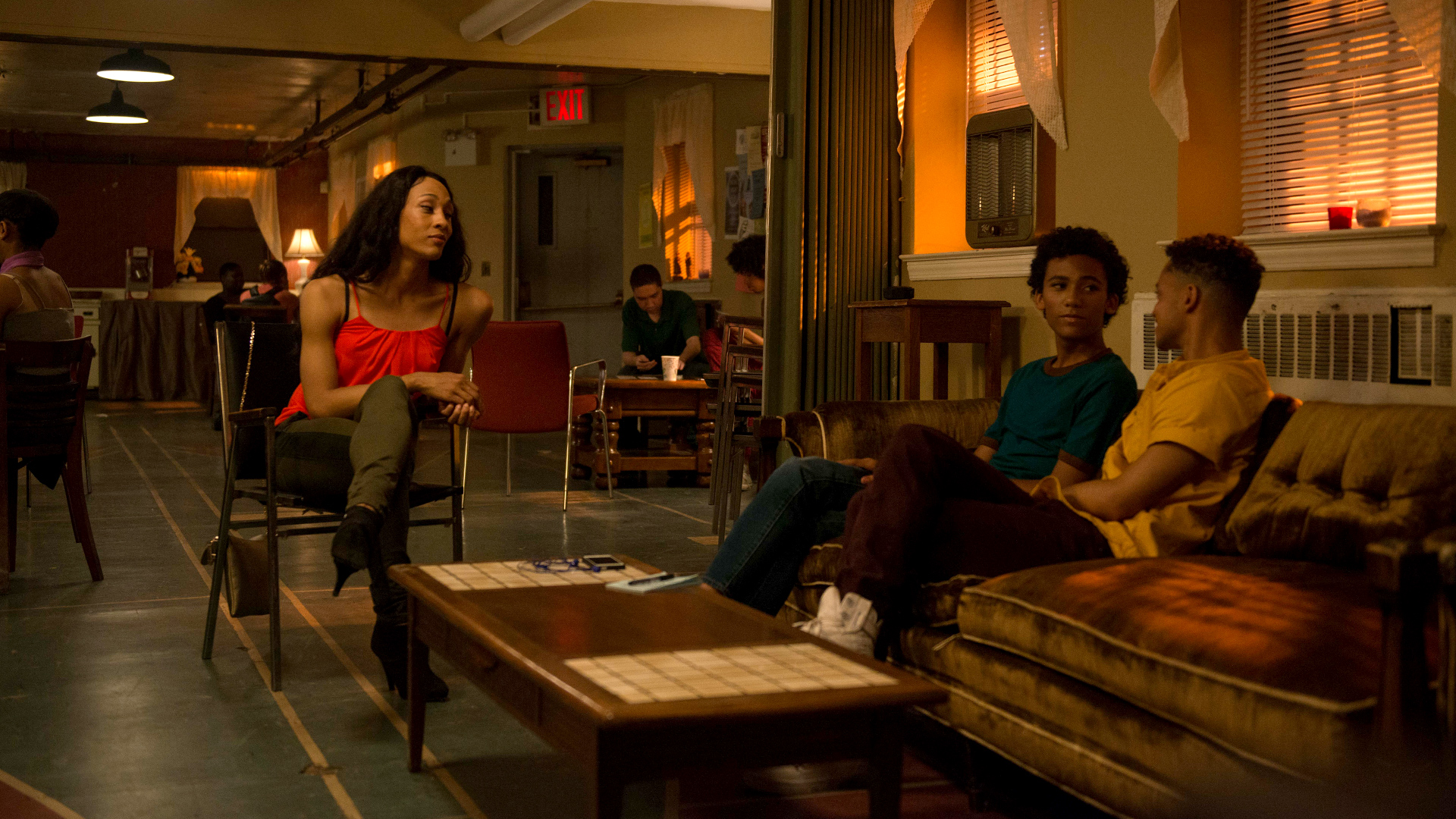 A: Yes, so we shot some of the interiors of the film at his mother’s church, who has always been an ally, taking her congregation to Pride rallies in New York. The church the film is based on is St. Luke’s Church in the Fields [in NYC’s West Village] which has a Saturday Church program like the one depicted in the film. It’s where the exteriors were shot. They take in LGBTQ youth, feed them, give them counseling, job advice and health care. Damon’s mother wanted him to volunteer there and when he did, he began hearing these heart-breaking stories. Ulysses story is semi-based on one of those young people. One common thread throughout Damon noticed was despite the horrible things they had experienced, these young people were able to escape through art and music. There was a gym right across the way where they would host dance battles and Vogue contests. They were beautiful artists and Damon wanted to capture that.

Q: This script calls for you to do a lot. What was the most challenging?

A: Definitely the dance montage in the middle of the film. Our dance consultant gave me a one-hour Vogue dance lesson and taught me three moves and then I had to work those three moves for about five minutes in the film. There were a few extras but a lot of the time, it was just me walking down the street doing these three moves. It was a lot of fun filming that but also kind of nerve-wracking!

Q: It was just you and your backpack.

A: Exactly! We had 20 days to shoot the entire film in the summer and because I’m a minor, we only had nine-hour work days each day. So everything had to operate like a machine. We had to have it together every day.

Q: I screened this film the first time at home so I was able to cry buckets in the privacy my home. The love scene between Ulysses and Raymond [played by Marquis Rodriguez], “So Lost Without You” is incredibly powerful and we don’t often get to see scenes like that in films. Were the two of you aware when you were filming it how powerful that sequence was going to be?

A: We were not but when we saw the playback, we were very moved. What you see in the final film was done in one take. Plus, it was my first kiss on film and my first kiss in normal life too.

Q: That is not a bad first kiss experience, my friend!

A: I know, right?! (audience laughs) The first take I actually choked and almost vomited because I had popped in a mint to keep fresh and I choked on it! Luckily, we were able to capture a more romantic vibe afterwards. The whole sequence was one shot which was very difficult but our Director of Photography Hillary Spera somehow got it all in one take. It was amazing to shoot but we didn’t realize the real power of it until later.

Q: You commit so many acts of bravery on screen in this film and viewers might get so caught up in your performance they could forget you are the same age as the character you’re playing. As an actor and a teen, how did you separate all that out mentally?

A: I was very nervous going into the shoot. I knew it was an indie movie with a small budget and I had to be very professional in order for us to create a piece of art we would all be proud of. I had to separate myself from that nervousness and come in every day ready to work. The emotional preparation was there. You had to take whatever little moments you were given and make it work. 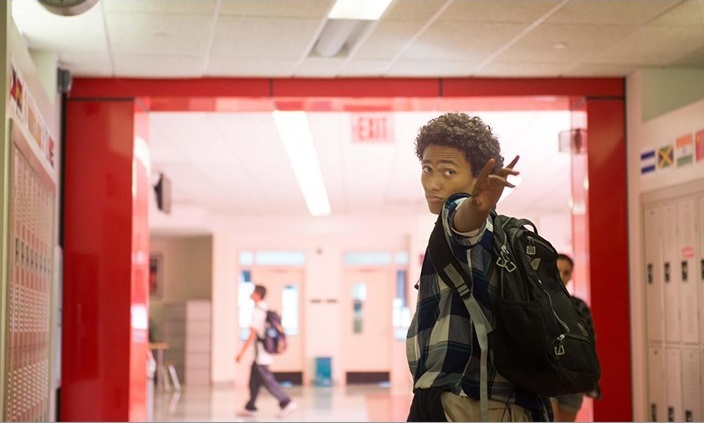 Q: You’ve said that you’re proud of the character of Ulysses that he’s a three-dimensional person and not just a tribute to diversity. When did you realize when he was going to be a real flesh and blood character?

A: As soon as I read the script I felt a connection to Ulysses as a person and just as a teenager, who was as confused as any teenager. He felt like the world was closing in on him. But I feel like for Ulysses, not only does he find himself in the film, he’s able to come to terms with a lot of things and be comfortable with who he is. This is such important representation for people to see. Damon, our writer and director thought it was very important that all of the people in the cast be people of color and all of the trans characters be played by trans actors (audience applauds). He wanted to make sure that no matter what, the film was a human story and to make sure it wasn’t exploitative or voyeuristic.

Q: We’ve got to talk about Aunt Rose who is played by the great Regina Taylor. Some of us in this room are old enough to remember her as Lilly Harper from “I’ll Fly Away,” the 1990s TV series that was shot here in Georgia. Did you Google her before you filmed your scenes with her?

A: Most of the people in the film I met on set. We had one meeting a couple of days before the shoot but that was it. I didn’t know that Regina Taylor was going to be in it or that [author, playwright and performance artist] Kate Bornstein was going to be in it. To be surrounded by such talent was an amazing experience.

Q: What do you want “Saturday Church” to say to young people, especially young people of color who might be working out their sexual or gender identity?

A: It’s important for young people to see this movie and to connect with Ulysses, even if it’s not through sexuality or gender identity. I just want them to know it’s OK to be who you are, that you’re a beautiful human being. If you’re scared or you don’t have support at home, there are people out there who love you. There are a million different ways to express yourself and every single one is beautiful. If one young person can see this film and be changed by it or can connect to it and be comforted by it, that would be amazing to me. That’s my hope for this film.

The critically acclaimed “Saturday Church” will have a free encore screening Wednesday night at 7 p.m. at the Phillip Rush Center, 1530 DeKalb Avenue, Suite A, Atlanta 30307.

That Time Black Panther Came To Georgia And Kicked Ku Klux Klan Ass! ‘A Bullseye on the Back of His Suitcoat’ — Andrew Young Recalls MLK’s Final Days in ‘Memphis Facing The Cross’