In 1953, President Dwight D. Eisenhower declared homosexuals “a threat to security” and ordered all gay and lesbian government employees fired. At the height of the Cold War and Red Scare, Eisenhower believed (without a single case being discovered or prosecuted) closeted homosexuals could be compromised into acting as spies for the country’s enemies. The witch hunt would last for 40 years until President Bill Clinton signed an executive order prohibiting government workers from being fired because of their sexual orientation. Based on author David K. Johnson’s 2006 book “The Lavender Scare: The Cold War Persecution of Gay and Lesbians in the Federal Government,” producer-director Josh Howard’s new documentary is a fascinating, thought-provoking and eerily relevant piece of filmmaking, hitting the festival circuit just as current president Donald Trump re-institutes a ban on transgender individuals serving in the military.

In advance of Thursday night’s Atlanta premiere of his documentary as part of the Atlanta Jewish Film Festival Selects series, co-presented with the Out on Film LGBT Film Festival at Midtown Art Cinema at 7 p.m., Howard reflected on the eight years he dedicated to making “The Lavender Scare.”

Q: You have 24 Emmys for your work on “60 Minutes,” many of them for stories you did with Mike Wallace. As a journalist, when did you know you had to make a documentary of this story?

A: The fun of being a producer at “60 Minutes” was going out and finding the stories to report on. Stories weren’t really assigned to you. You went out and found them. When I came across the book, I thought, ‘This is a great story.’ But as a student of American history, why didn’t I know about it? It was that old “60 Minutes” feeling of finding a story that needed to be told. I didn’t go looking for a project but eight years later, here we are. 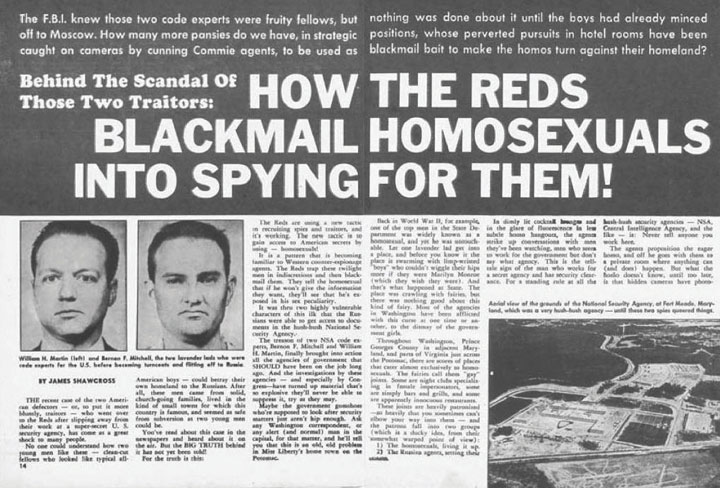 Q: For the documentary, you enhanced the book’s original reporting by finding additional people to interview. As you dug deeper, what did you unearth?

A: Primarily it was the interviews with government officials. In his book, David [Johnson] mostly focused on the victims, the government workers who were fired and we found most of those people thanks to David and his research. But I recruited a journalist and researcher who I had worked with at “60 Minutes” who found some of the government officials who were involved, including John Hanes, the number three guy at the state department responsible for enacting and enforcing this policy. Also, we found the former director of security for NASA, Bartley Fugler. To me, these new perspectives were really fascinating. To hear these government officials all these years later reflect on what they did and to hear the details of how they did it as Bartley Fugler described it, in terms of how investigations were carried out, really provided some fascinating insights into the government’s thinking back in those days. 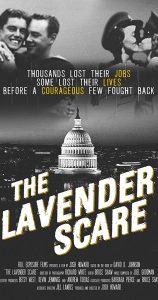 Q: In this film you’ve preserved the stories of people like Joan Cassidy, a career navy woman, Carl Rizzi, a career U.S. Postal Service employee and drag performer and Frank Kameny, often referred to as the grandfather of the gay rights movement. They’ve since died. How is it taking this film around the country and sharing those legacies?

A: It’s incredibly rewarding and I’m so happy we started the project when we did. David did most of his research in the 1990s. He had many more people to talk to. By the time we started, the cast of characters was dwindling. This was the last major interview Frank Kameny did. We spent three days with him. He’s someone who really deserves his own documentary. Taking this film around the country has been tremendously rewarding. We did a screening in Ocean Grove N.J. and after these two elderly women came up to me, both in their 90s, and told me they had met in the 1950s when they were both secretaries for the Social Security administration. They were partners and when it was discovered they were lesbians, they were fired. They told me, “We had no idea we were part of this bigger thing that was happening. All these years, we thought it was just us. Thank you for telling our story.” I still get a little emotional retelling that. Getting to preserve these stories and hopefully continue to have an impact for future generations makes the eight years of work worthwhile. There’s now a permanent record of these lives.

“The Lavender Scare” will have its Atlanta premiere Thursday, September 14 at the Midtown Art Cinema at 7 p.m. Director-producer Josh Howard will be on hand for a post-screening Q&A and a VIP reception. For tickets and info click here.

How ‘The Weight of Sound’ Inspired Its Own Soundtrack With Kiona D. Reese as Dr. Frank N. Furter, Out Front Theatre Takes ‘Rocky Horror’ to Church