Somewhere in an afterlife watering hole right now, Truman Capote is probably perched on a barstool still giving director Blake Edwards hell for bastardizing his novella, “Breakfast At Tiffany’s.” Hollywood, after all, has a storied tradition of mercilessly screwing with the words of Southern writers.

So, it’s only natural then that for fans of the Mississippi-bred and Atlanta-reared words of playwright Topher Payne, there might be a bit of trepidation tuning into the writer’s first-ever TV screenplay, “My Summer Prince,” a Hallmark Original Movie debuting Saturday night at 9 on the Hallmark Channel.

Exactly 54 seconds into the charming romantic comedy starring Lauren Holly as crisis PR guru Deidre Kelly and Taylor Cole as Mandy Cooper, her eager assistant, Payne’s faithful fan base is wonderfully reassured as Deidre rushes to the set of a morning talk show. Her newest client, the author of the beloved “Stuart The Singing Salamander” series is about to issue a mea culpa on live TV after a video of her in full-on Joan Crawford at a Pepisco board meeting mode, berating her staff has gone viral. 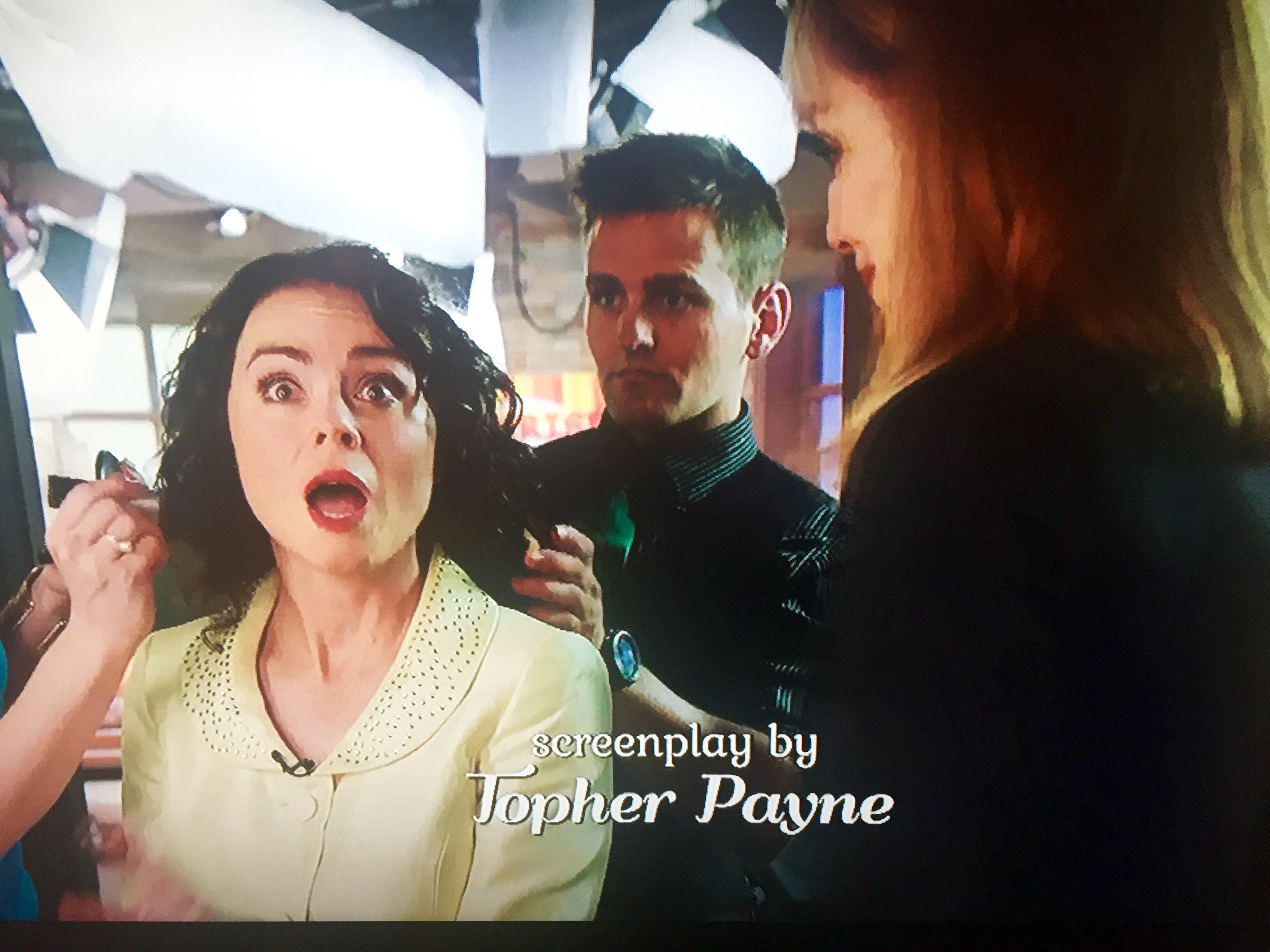 “She writes children’s books,” Deidre fumes. “She should be happy about everything.” It’s a trademark Topher line, that’s not only funny but also highly functional, telling us everything we need to know about the veteran New York PR pro. It’s a line that could have been delivered at Onstage Atlanta or at 7 Stages.

Luckily, for millions of television viewers, it’s being delivered on the Hallmark Channel. With Payne’s knack for writing wise, witty women, it’s a basic cable audience tailor-made for him.

But even the playwright himself had concerns when he turned in the script in May and shooting began in Park City, Utah in June. Says Payne: “I have a lot of talented friends who moved to the west coast and if a few lines end up sounding vaguely similar to what they wrote, it’s an accomplishment. You’re consistently told that film is not a writer’s medium. It’s a director’s medium.”

Payne lucked out with “My Summer Prince” director Peter Sullivan, who is also a writer. “He was amazingly helpful on the writing of the film,” says Payne. “Everyone was amazingly supportive. They were rooting for me. “The producers knew I could write characters and dialogue but I stressed that this was my first movie and I was going to need some help with the logistics.”

The writer says the network would send him a note on the screenplay, asking him to change a slug line, for example. “I would email them back and say, ‘Of course. No problem!’ And then I’d have to Google ‘slug line’ in order to figure out what the hell the terminology meant!”

Following a critically acclaimed off-Broadway staging of his play “Perfect Arrangement” at Primary Stages last fall in New York, the world premiere of “Let Nothing You Dismay” at Stage Door Players in November, the subsequent publication of “Arrangement” and his dark comedy “Evelyn in Purgatory” for Samuel French, Payne has also kept busy directing “The Cordeaux Canvas” opening today at Out of Box Theatre. Oh, and in his 14 seconds of spare time, he strapped on an ‘80s-era shoulder pad enhanced power frock and resurrected Julia Sugarbaker when “Designing Women” creator Linda Bloodworth Thomason emailed him a fresh monologue taking down Donald Trump, her first new monologue for Julia in 23 years.

The Atlanta writer got the unexpected Hallmark gig after his management team arranged a meeting in Los Angeles with Payne and Cameron Larson, the director of original programming for Hallmark. With a full slate of theatre projects in the works, Payne let everyone know he wouldn’t be available until the fall. But Larson was so impressed by the writer, two weeks later, Payne’s phone rang and the opportunity to write “My Summer Prince” was offered.

The romantic comedy’s plot revolves around Deidre and Mandy being summoned to small town Idaho where a soggy Prince Colin (Jack Turner), a charming but rebellious royal has drunkenly misbehaved in a public fountain. Helping to extinguish the flames of the royal scandal is Queen Rosalind’s chief of staff, Penelope Sheridan (played by Marina Sirtis). When Deidre becomes enflamed with her own potentially contagious crisis, Mandy has to figure out how to save the day.

With six weeks to turn around a finished script, Payne’s gift for working quickly paid off. And thanks to a well-timed Hollywood check, for the first time in his 17-year professional career, he took a temporary leave from his day job and was able to commit 12 hours a day to the project.

“As a struggling playwright, my entire career has been built around only being able to write three hours a day,” Payne explains. “Turns out, you can accomplish a lot when you dedicate 12 to 16 hours a day to this!”

And when his finished script reached agents and then actors, Payne had a host of famous new fans. These days, Lauren Holly, who first rose to fame on David E. Kelley’s “Picket Fences” (she knows a little something about solid writing) lives in Canada and stars in the hit drama “Motive” there. With a family to consider, she chooses her hiatus projects carefully. Holly, who’s now struck up a mutual admiration society with Payne on Instagram used the social media platform to praise his “funny, charming script. #writersrule.”

On set in Park City, Utah, Payne also struck up a friendship with Sirtis, best

known for playing the humor-challenged empath Counselor Deanna Troi on “Star Trek: The Next Generation,” who scores some of Payne’s funniest dialogue in the film.

The emerging screenwriter also became a walking sight gag for the bemused Brit when director Peter Sullivan had Payne transformed into “a Mormon school boy” (as Sirtis described him) for a cameo as a hapless tourist in an elevator scene.

There’s also a recurring bit involving ketchup that’s pure Payne, a ill-timed vomit-inducing Pepto Bismol pink formal wardrobe choice from hell and a scene where Mandy has to track down an MIA Prince Colin in the small Idaho town. This being a Topher Payne script, she heads for one place — the beauty parlor.

“Well, of course,” Payne concedes laughing. That’s me being raised in Mississippi right there. Mandy’s a smart girl and she’s in a small town. You’re not going to call the police. You just need to find a hairdresser. You’ll get all the information you’ll need!”

But Payne’s favorite scene in the film doesn’t involve any withering one-liners. It’s the expertise Cole and Turner bring to a smaller scene, set outside next to a carousel as they quietly discuss the loss of a parent. 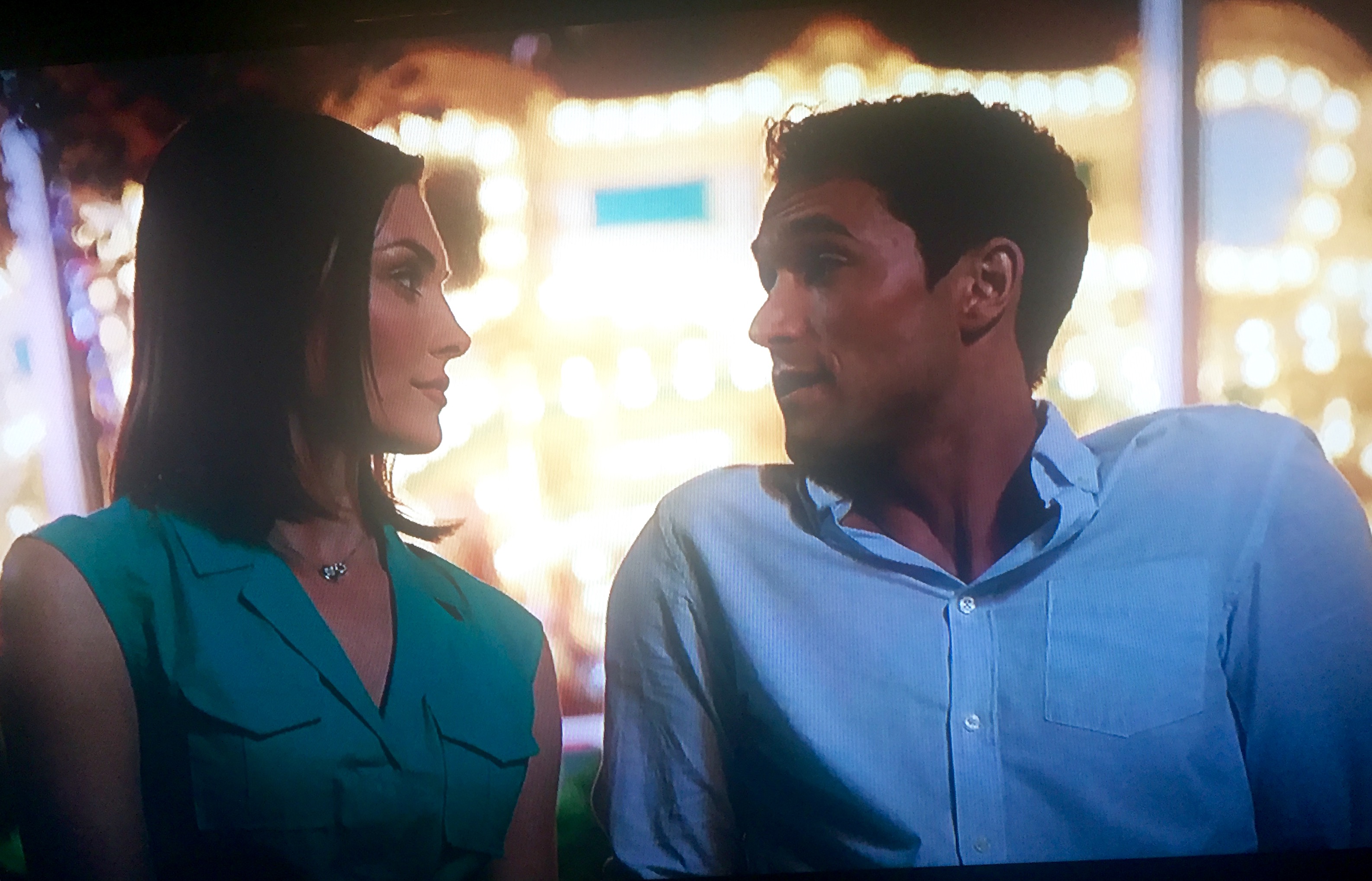 “It’s simple and spare and the sort of conversation you have with someone on a really good date,” says Payne. “It’s when you legitimately begin talking about yourself. They just nailed that scene. It doesn’t exactly hurt that they’re both ridiculously attractive human beings either. Taylor and Jack had such great chemistry together. I wish everyone could have watched them play ping pong at the wrap party!”

With all parties pleased with how “My Summer Prince” turned out, Hallmark and Payne are now discussing the possibility of creatively reuniting for a Christmas-themed project. 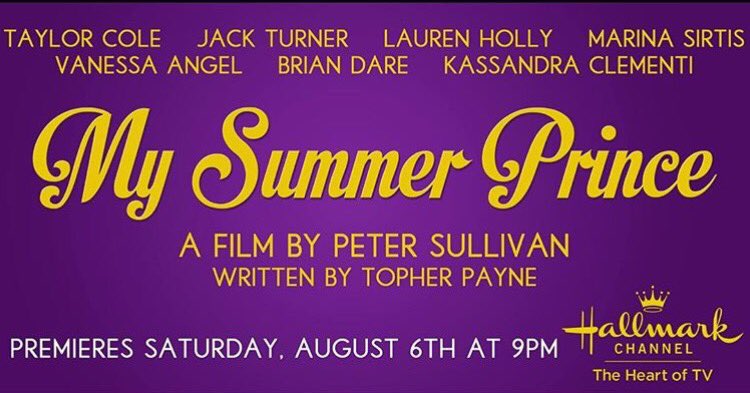 On Saturday night, Payne will be feted at a family viewing party in Mississippi thrown by one of the Hallmark Channel’s biggest fans — his mama. She’s spent a lot of time over the past year escaping into the channel’s family-friendly romantic programming as she went through breast cancer treatment.

Says Payne: “She’s my warrior. She tuned into the Hallmark Channel because she wanted to feel good. My mother represents a core audience for them. And I know how to write for that audience. It’s a network that really fulfills a need. It’s an amazing blessing to be able make a direct contribution to that programming as a gift to my mama. Believe me, the network she counts on to make my mother feel good is now making her feel great.”

The Acts From Athens (and a few from Atlanta) You Need To Be Listening To Right Now! Twenty Years After “Rent,” Anthony Rapp Leaps Across Lives In “If/Then”