The Acts From Athens (and a few from Atlanta) You Need To Be Listening To Right Now! 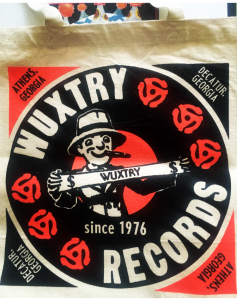 Editor’s Note from Rich: The first time I met John Kiran Fernandes, I needed a token for the clue bus. I was in Wuxtry Records in Athens, poring over the new local releases. I asked the guy behind the counter if he could make any recommendations. He grinned, pushed a shock of black hair out of his eyes and walked over to the New Releases section. Five minutes later, I had a stack of vinyl thick enough to warrant a free Wuxtry canvas tote bag. As the clerk began ringing up my stack of purchases, Wuxtry owner Dan Wall walked over to the Local Artists section, put a copy of “Music From the Unrealized Film Script ‘Dusk At Cubist Castle,’” the now-classic 1996 2-LP debut album from The Olivia Tremor Control on top of my purchases and said, “John would never tell you this but he’s in this band. If you don’t own this, you should.” In Athens, this musical masterpiece is as revered as the Beach Boys “Pet Sounds” and The Beatles “White Album” combined. Fernandes, shrugged his shoulders, smiled and kept banging away, punching buttons on the cash register. For me, that’s the beauty of the Athens music scene in a nutshell. As an in-demand multi-instrumentalist, Fernandes played on half of the records I had just bought but his ego took a backseat to helping to spread the word about his fellow artists.

When our July guest editor Vanessa Briscoe Hay suggested asking John to curate the ultimate insider’s guide to bands you need to be listening to in Athens, I was thrilled. I can’t think of anyone more plugged into the music scene there.

When I was in Athens this summer helping to organize stories for this month’s content, the locals were raving about another young artist and musician on the scene. A kid, pushing a shock of black hair out of his eyes named Jeremy Kiran Fernandes. He plays in an Athens band called Seadust Mercury Exhibit. They have a Soundcloud page. Kiran is John’s son. Talent is clearly genetic. John’s oldest son, Ravi, is also an iconic part of Athens music history. He’s the baby in the crowd whose excited squeals populate Jeff Mangum’s “Live at Jittery Joe’s” recording. Wanna feel old, Neutral Milk Hotel fans? Ravi just turned 20.

Some of my favorite current Athens, GA bands are:

LYR (dreamy songs with vocals that remind me of Broadcast): https://soundcloud.com/lyrsongs

I currently play with:

The New Sound of Numbers: https://www.youtube.com/watch?v=aW2cpO84hWM

I’m associated with The Elephant 6 collective which came from Ruston, Louisiana, and included The Apples (in Stereo), The Olivia Tremor Control, and Neutral Milk Hotel. A community of like-minded souls who traded 4-track tapes, and eventually started releasing classic records.