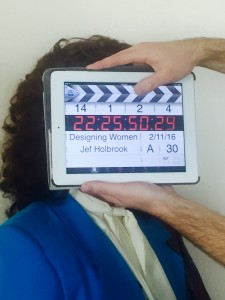 On Thursday night even as GOP presidential candidate Donald Trump flirted again with uttering a certain vulgarity during a campaign stop in Baton Rouge, 525 miles away in Atlanta, the reality TV star’s worst nightmare was quietly slipping back into her stylish shoulder pads for the first time in 23 years.

The white silk blouse, the blue blazer, the big brunette hued hair and the oversized designer eyeglasses are all familiar. But there’s still something a bit fuzzy. With a camera rolling and make-up melting hot lights overhead, director Jef Holbrook quietly suggests, “I like your instincts but it needs to be quieter, like you’re talking to a little boy.”

The film shoot’s editor Daniel Rider holds up an iPad clapboard near a freshly powdered face and says, “Scene Two, Take Five.” Taking a deep breath, steely eyed yet poised, the most iconic steel magnolia since Scarlett O’Hara stares intently into the camera, smiles demurely and on behalf of women across the country, addresses Donald Trump directly with her own campaign message: “Finally, Donald, you’ve made presidential campaign history by bringing into play the one word used by all insecure men to describe a certain part of the female anatomy — that perennial favorite ultimate insult word used to suggest weakness, cowardice and a complete lack of character. And that word Donald, is pussy. I prefer the word my grandmother used Miss Pretty but pussy is what you called it, so pussy it shall be! 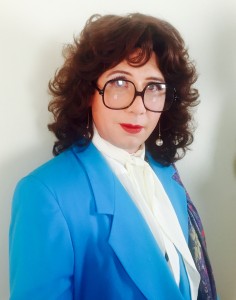 Sugarbaker is back in action, speaking words that transport you back to Sugarbaker Designs, located at 1521 Sycamore Street in Atlanta for the first time since the hit CBS sitcom left the airwaves in 1993.

While Julia’s one-and-only portrayer actress Dixie Carter died in 2010, the character is currently inhabiting the body of Atlanta actor and playwright Topher Payne, with her creator’s blessing.

But now, Julia Sugarbaker’s creator has written a fiery new monologue for her beloved character for the first time since the Clinton administration (Bloodworth Thomason has been busy directing the critically acclaimed Tribeca Film Festival winner “Bridegroom” and is currently penning a Broadway musical). During a conference call with Payne Thursday night, the press shy Bloodworth Thomason confirmed authorship to Eldredge

“Julia sort of commanded me to write it,” Bloodworth Thomason explained. “With Donald and his bag of misogynist comments marching toward Atlanta, it was just too irresistible not to have Julia greet him.”
And thanks, but Bloodworth Thomason isn’t interested in doing any media interviews. She says the piece speaks for itself.
When asked about Dixie Carter, Bloodworth Thomason replied, “Dixie and I were great friends. It’s difficult for me to talk about her without becoming emotional. Yes, she was a lifelong Republican, but she was also a champion of women and was always excited to say whatever I wrote for Julia, a liberal Democrat.”

The unexpected collaboration between Bloodworth Thomason and Payne began this week when Payne says he received an email from Bloodworth Thomason’s office. When he clicked open the attached document, he was staring at the first new Julia Sugarbaker monologue in more than two decades. As the Process Theatre “Designing Women Live” performances at OnStage Atlanta have grown into an annual sold-out event in Atlanta over the years, the sitcom’s creator and Payne have occasionally communicated, with the writer- producer giving her blessing to annual homage, sending along original mimeographed scripts for the Atlanta actors to use (she even bestowed upon Payne the oversized 1980s era black frames Dixie Carter once wore as Julia).

With the next “Designing Women Live” set to run April 1-10 at OnStage Atlanta, Payne originally planned to use the new monologue in the show.

Explains Payne: “But then I thought, ‘When the creator of ‘Designing Women’ writes the first new Julia Sugarbaker monologue in 23 years and it’s this good, we can’t limit it to just a few hundred people seeing it live in Atlanta. I mean, we’ve got this thing called YouTube now!”

After discussing the brainstorm with Bloodworth Thomason and getting her approval, Payne put together a film crew, dug out Julia’s dangling pearl earrings and sent word to Atlanta theatre wig wizard George Deavours to pull Julia’s locks out of mothballs and give them a quick wash and set.

The unabashed womens’ rights advocate, Bloodworth Thomason is also the architect of all three of Bill Clinton’s presidential campaign films, including the iconic “Man From Hope.” It was Donald Trump’s widely publicized series of unchallenged derogatory comments toward women that prompted Bloodworth Thomason to bring back her beloved character.

“Julia was speaking to me and I remember wishing the show was still on the air and that Dixie was still with us,” Bloodworth Thomason explained Thursday night during the call with Eldredge ATL. “And then I remembered Topher and the guys in Atlanta who do such a wonderful job of keeping the show’s portrayal of these strong Southern women alive for audiences today. I’m such a fan of what they do and I knew they had a show coming up in April. Topher inhabits Julia Sugarbaker better than anybody ever could, unless your name is Dixie.”

Now that “Designing Women” is flexing its “pretty” muscle again, The Donald should probably watch his back. When asked if the world can expect any further dispatches from Atlanta’s tony 1521 Sycamore Street address, Bloodworth Thomason laughed, “Who knows? We’ll be keeping an eye on him. It’s kind of a sweet thing to have something like this in your back pocket. Beyonce has her Sasha Fierce. And I have my Julia Sugarbaker.”


Related  "Giving Dramatic Voice To Who We Are As Southerners": A Conversation With Tom Key & Topher Payne

At Marlow’s Tavern, Love Simmers Behind The Scenes (Even If You Lock Your Future Wife Out Of The Restaurant!) Inaugural Atlanta Musical Theatre Festival Set to Debut August 1-2