At Marlow’s Tavern, Love Simmers Behind The Scenes (Even If You Lock Your Future Wife Out Of The Restaurant!)

But as it turns out, the patrons in the front of the house haven’t cornered the market on hand-holding. Over the years, the sparks have also flown behind the scenes at Marlow’s Tavern with multiple sets of team members marrying each other. Just in time for Valentine’s Day, here are two tales of love (and one hilariously torrid love-hate story!) from Atlanta’s favorite neighborhood tavern. 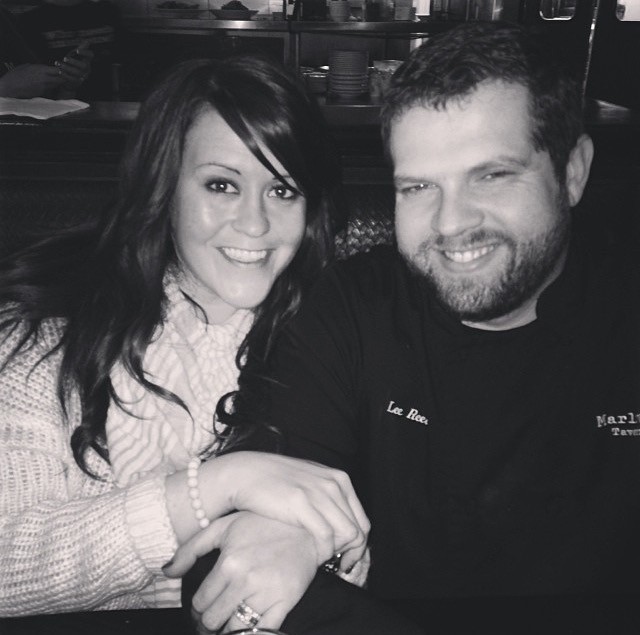 Lauren was just walking out of the Marlow’s Tavern in Kennesaw after a serving shift when she first spotted Lee as he arrived to interview for a kitchen position. Liking what she saw, Lauren joked to a co-worker, “I have first dibs on him!”

The problem? Lee and Lauren were in long-term relationships with other people. So, they became friends instead. However, on Cinco de Mayo 2009 as the pair celebrated after work with fellow staffers, the festive atmosphere (and perhaps a few celebratory shots of tequila) convinced the pair to re-evaluate their relationship. Keeping the holiday in mind, Lee eventually proposed to Lauren while on vacation in Mexico.

“Because we were friends first, that’s really the cornerstone of our relationship,” explains Lee, now the chef de cuisine at the Marlow’s in Avalon. “When I come home and tell her about my day, she understands. We can vent together and celebrate our successes together.”

Lauren is now a manager for training and development at Marlow’s, and the couple has an 11-month-old daughter, Charlotte, and a boy due this summer. When the Reeves said “I do,” Marlow’s employees from other locations filled in at the Kennesaw restaurant so Lee and Lauren’s co-workers could attend the nuptials. “These people are our mentors and friends,” says Lauren. “They’re the first people we showed pictures of our daughter to. Because we met at Marlow’s, they’re members of our family.” 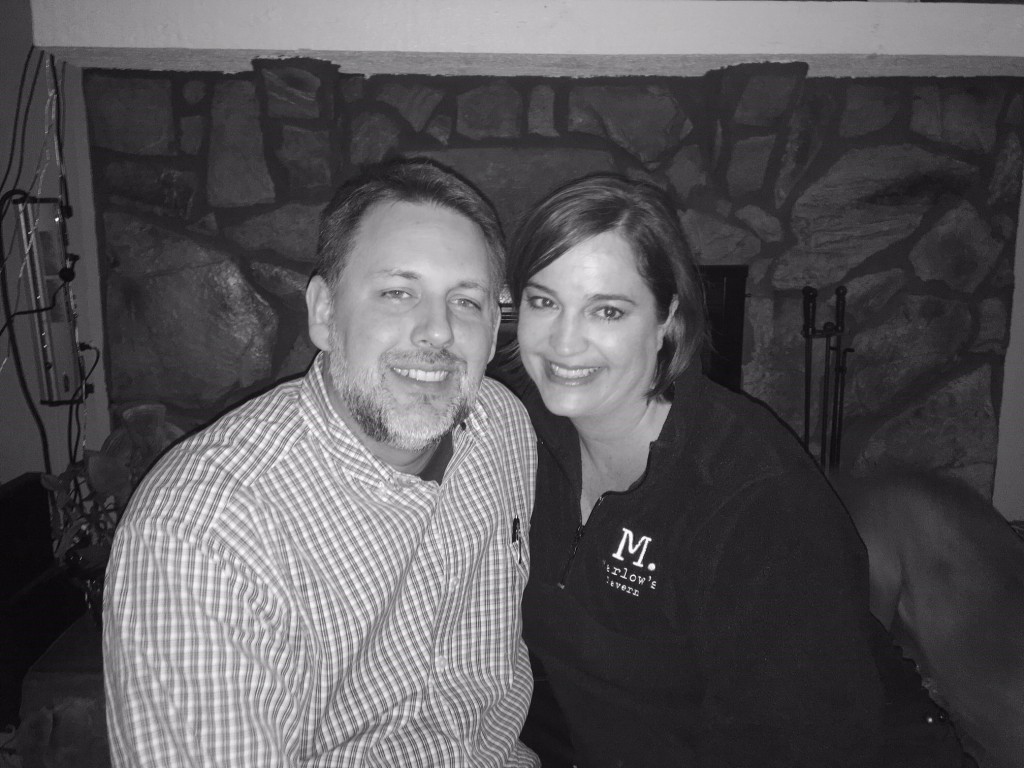 Jamie and Chrissy have known each other since they both attended East Cobb Middle School in Marietta. But, Jamie had a little growing up to do. “He was kind-of a troublemaker in middle school!” Chrissy explains, laughing. “Let’s just say he spent a lot of time in in-school suspension.”

But when they ended up at the University of Alabama together, Jamie had a geographically desirable bachelor pad adjacent to the bars, and the pair got reacquainted. They’ve now been married for 22 years. They became members of the Marlow’s Tavern family eight years ago after Chrissy snuck her husband’s resume to a recruiter. Jamie ended up loving the company so much, Chrissy joined the Marlow’s team a year later. These days, Jamie has been promoted to a Marlow’s market partner, and Chrissy serves as the market training coordinator.

“The key is having a spouse who truly understands the industry,” says Jamie. “Things can get really unpredictable at a restaurant on Feb. 14. For us, it’s more important to celebrate Valentine’s Day every day.”

With kids ages 17, 9 and 4, plus working in the service industry on one of the busiest days of the year, the Andrews know better than to make big romantic plans. So, if that means a late take-out dinner together, that’s fine with Chrissy. “I absolutely love our wings, our house-made hummus and our salmon. Plus, I happen to know a go-to guy at Marlow’s who can bring me all my favorites.”

The life lesson the University of Alabama couple is passing onto their 17-year-old daughter, who has just been accepted to Mississippi State University? “Marry someone who loves the same college football team as you do,” says Chrissy. 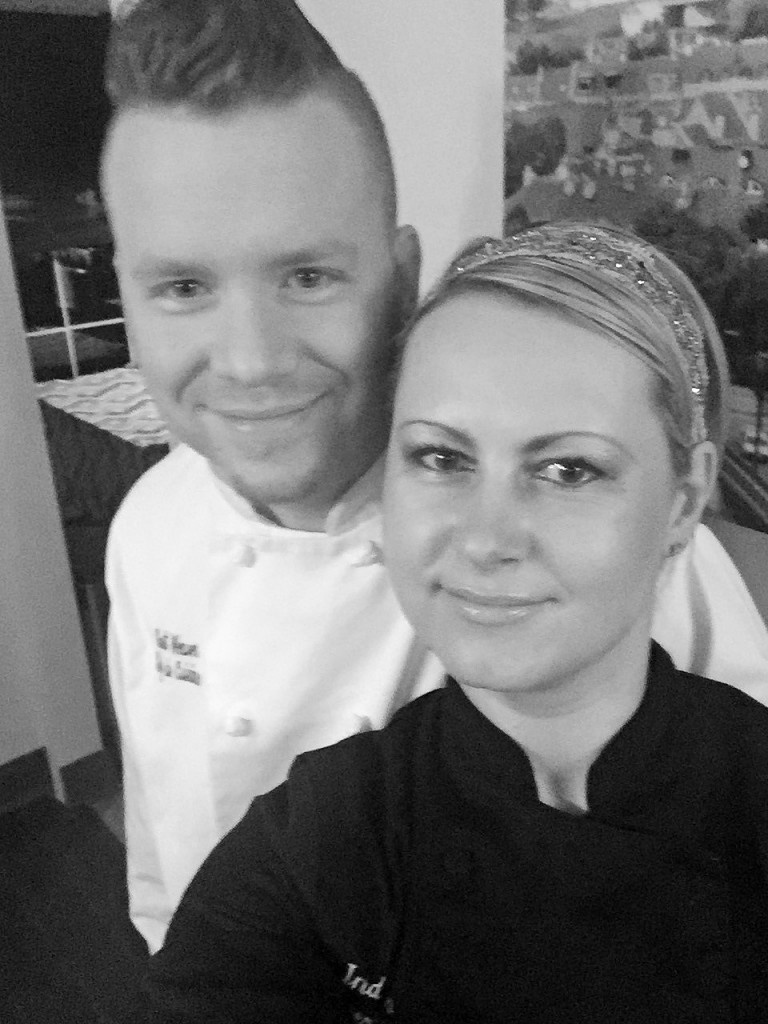 You’ve heard of love at first sight? Well, Scott and Indre’s Marlow’s Tavern romance was the polar opposite. “We started out as enemies!” explains Scott, the chef de cuisine at the Kennesaw location.

For starters, Scott locked Indre out of the restaurant one morning as she tried to open up. “I called and called, and after 45 minutes, I was sitting in my car crying,” says Indre, the general manager at Marlow’s Tavern in Vinings.

Meanwhile, Scott was in the kitchen, doubled over laughing. Things got so tense, the general manager phoned Marlow’s market partner Hank Clark for help. Clark excused himself from dinner with his family and drove to the restaurant to have a meeting with the pair. “Hank told us if we couldn’t figure out a way to work together as a team, one of us would have to leave,” Indre recalls.

Then, one night at a club with co-workers, the pair’s icy relationship thawed. “She liked me,” Scott explains. “And I liked her. We just weren’t great at the communication part.”

Adds Indre, “I would go into the kitchen in the morning, and he’d been in there blasting Audio Slave and prepping tomatoes with these crazy knife skills. I’ll admit, it was kind-of hot.”

While his courting technique left something to be desired, Scott got the marriage proposal right. He surprised Indre with an overnight trip to the Biltmore Estate in Asheville, North Carolina, to celebrate her birthday. They were strolling the lavish gardens when a summer storm blew in. “We were running to the car and stopped under a tree to catch our breath,” Indre explains. “Suddenly, Scott was on one knee, and I saw the ring.”

Among the Marlow’s Tavern co-workers who attended the couple’s 2007 wedding? Hank Clark who inspired the couple to pursue a well, friendlier work relationship.

Now working as a general manager, Indre says she knows exactly how to handle quarrelsome staffers. “I tell them, ‘You better be careful. You could end up married to each other!’”