Two decades after “Rent” made him famous, Broadway actor Anthony Rapp is in that stage of a career when friends create parts for you. That’s how Rapp ended up playing Lucas, the lovably sarcastic social justice protester in the hit musical “If/Then.” Luckily for Atlantans, Rapp decided to continue playing the role in the first national tour of the romantic comedy with music by Tom Kitt and Book & Lyrics by Brian Yorkey. The musical plays at the Fox Theatre through Sunday.

Another similarity for Rapp — his character is romantically entangled in a complicated relationship with charismatic brunette in a role originated by Idina Menzel ala Rapp’s Mark and Menzel’s Maureen in “Rent.” For this part of the tour, Jackie Burns, another member of “If/Then’s” Broadway cast steps confidently into the role of Beth/Liz.

The delightful and poignant show takes us through the two potential lives Beth/Liz might have lived, based on a split second decision she makes one afternoon in New York City’s Madison Square Park. The entire cast is required to mentally and physically leap back and forth between the very different realities for three hours each night. 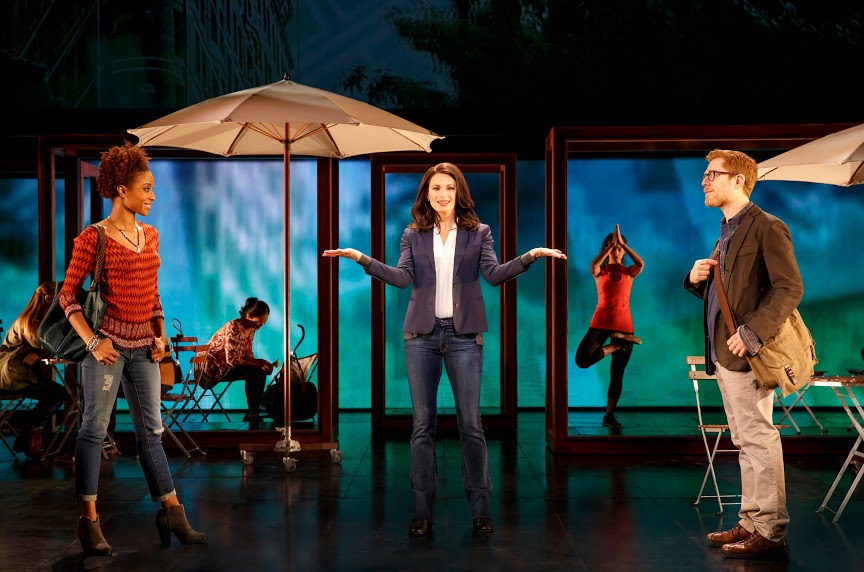 And Rapp’s Lucas is at the center of the action in both realities. “Thankfully, it becomes muscle memory,” Rapp explains laughing. “It’s a bit like pressing buttons. It required a lot of work to get to that point. It was mostly about making sure that we all were very, very clear about what distinguishes one life from another and that we knew exactly what was happening at all times. When you get that in your brain and your body and your soul, then you can switch back and forth with relative ease.”

Rapp has compared Lucas to an older version of his documentary filmmaker “Rent” character Mark (indeed, in one of the musical’s realities, Lucas is a $17,000 a year squatter). Upon encountering Tamyra Gray’s Kate in the park Rapp’s character observes, “You’re one of those people who talks to strangers, aren’t you?”

“Lucas is a complicated, interesting human being,” says Rapp. “He can be moody, neurotic, sarcastic. But he has a very strong core and idealistic nature. I love that about him.” 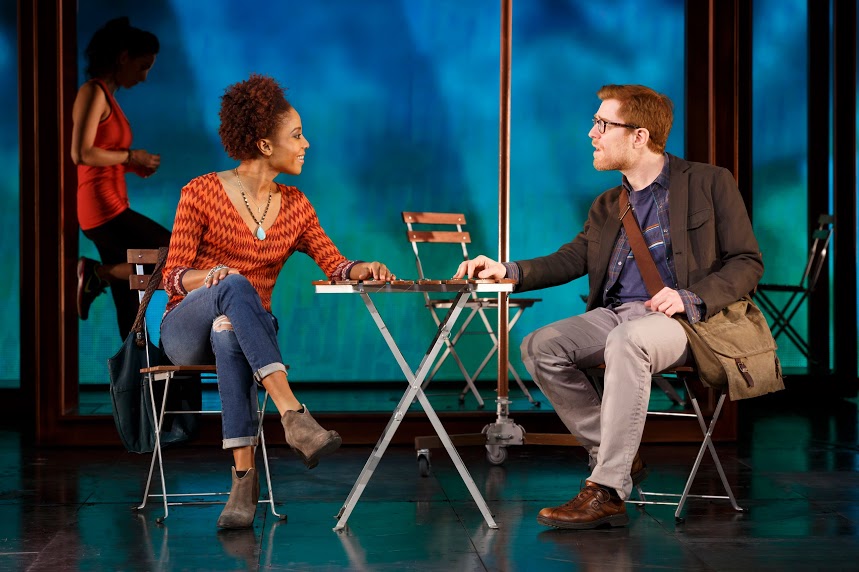 And he arguably has one of the best songs in the first act of “If/Then” as well. A wry ode to the complexities of modern relationships, Rapp brings the house down nightly performing “You Don’t Need To Love Me.” It’s a gift,” he says of the number. “It’s just a perfect song in how it fits the show, how it says what it says and how it’s written. When you have a song that good, it’s effortless in a way. All I have to do is fall into it and it takes me where it needs to go each night.” 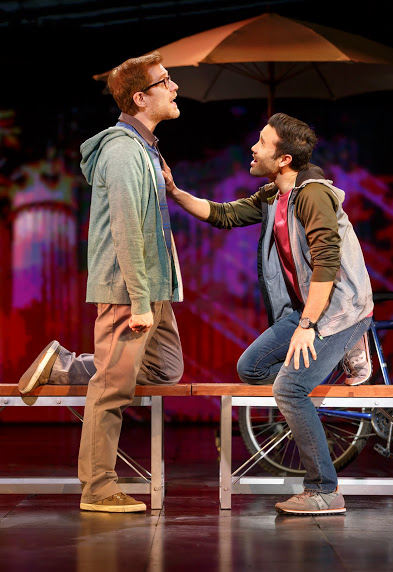 So how does a show brimming with the hilariously caustic wit of neurotic New Yorkers (Burns’ first act showstopper, is, after all, a duet between Liz and Beth titled “What The F**k?”) play across the country? “We were wondering that ourselves when we first took this out,” Rapp concedes. “I’ve been happy to see that the humor and emotional impact resonate no matter where we are. Some jokes land a littler harder in some cities than others but by and large, it’s been warmly received everywhere we’ve performed it.” On opening night at the Fox, the cast received a standing ovation.

Next up for Rapp, another possible tour with his one-man show “Without You,” based on his 2006 memoir that’s already played to enthusiastic audiences in London, Edinburgh, Toronto and New York. He also hopes to hit the LGBT film festival circuit to support the new indie romantic drama “Do You Take This Man.”

“I play this very intelligent, neurotic guy Daniel,” Rapp says laughing. “I tend to play neurotic people. Daniel, on the eve of his wedding to his fiancé Christopher, starts to have some complications. It’s a character study on Daniel, his husband to be and their friends. It’s a very human portrait of recognizable situations that people might find themselves in.” 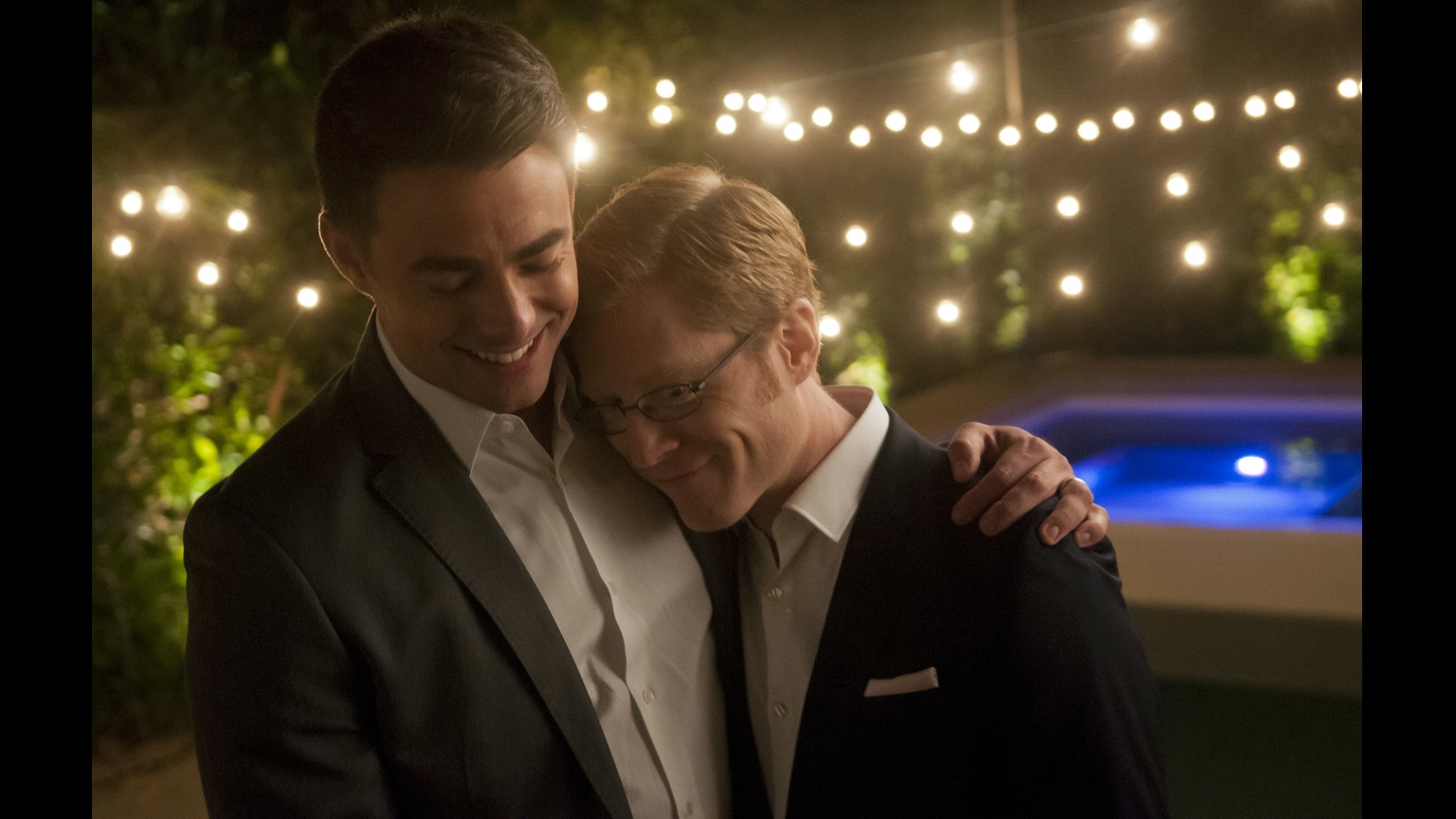 The film was shooting last summer when the Supreme Court decision legalizing same sex marriage was handed down. Says Rapp: “I’ve been involved in the same sex marriage equality conversation for a long time. I felt things would come around. But to be shooting a film about it when the decision came down? It was resonant for all of us.”

Between tours and film shoots, Rapp has been one of those fortunate theatre-goers who’s taken in multiple performances of the Broadway phenomenon “Hamilton,” a show that, much like “Rent” 20 years ago, has brought young people back to Broadway. Says Rapp: I feel lucky to be on the outside looking in at the success of ‘Hamilton.’ It gives me a sense of what it was like for people who were fans of ‘Rent.’ I’m a huge fan of ‘Hamilton.’ That’s actually an understatement! I’m very gratified and deeply proud that ‘Rent’ and ‘Hamilton’ are spoken of in the same breath. It’s reached young people in a way that theatre sometimes doesn’t. I’m convinced that [‘Rent’ creator] Jonathan Larson would love ‘Hamilton’ and he would love the comparison as well.”

Some tickets remain for weekend performances of “If/Then” at the Fox Theatre. Visit the Fox website for more information.

Topher Payne Wrote a Hallmark Movie, Y’all. And it’s great! Lunch With Libby: A BLT, A Coke And Lots Of Delicious Dish on “Company”