Memories of Eldorado, the Athens Eatery Where The Squalls, B-52’s Once Worked

I arrived in Athens in November 1978, probably not the first and certainly not the last musical pilgrim to come to our little town.  The summer before that, I’d been living in Kennebunk, Maine, where I worked as a waiter in a lobster restaurant. My friend and future Squalls bandmate Ken Starratt, whom I’d met at the frequent jams we had there, told me that “something was happening” with music in Athens, and so that fall, Ken and I headed south in his old VW van, stopping along the way to catch some Grateful Dead shows.

When we arrived in Athens, Ken took me to the Eldorado, a vegetarian restaurant on the Southeast corner of Washington and Hull streets in the Morton Theatre building. He had done some masonry and carpentry work for the Eldorado and thought I could apply my restaurant experience there to help them out. The Morton has since been purchased by the city and has been wonderfully restored, but back then, the theater was rundown and home to many a pigeon. The only tenants were The Book Back, a great used book store, photographer Gary Crider, and on the corner, Eldorado, a lively restaurant with a spiral rainbow painted ceiling and a vibrant hippie ethic. 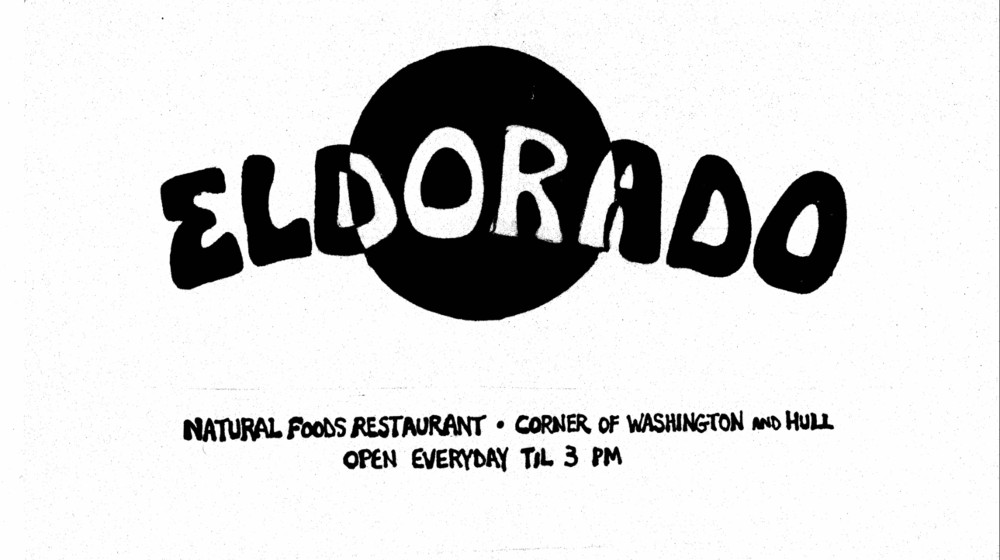 I began working at the Eldorado as a waiter, but soon expanded my duties to include dish-washing and cooking. At the time I arrived there, the owners were off on a tour of India, so the operations of the restaurant were very fluid. It was really for a brief time an almost utopian communal situation. People stepped up and did their thing. Jay Weidener was the head waiter and acting manager. Wayne Autry cooked a mean omelet and home-fried potatoes and had a big following for his breakfast treats. Lu Dominski and Cheryl Rogers cooked up some down-home delicacies: collards, fried okra, squash casserole, black-eyed peas, etc. —  bought from local farmers —  that the people needing lunch in downtown Athens just loved. 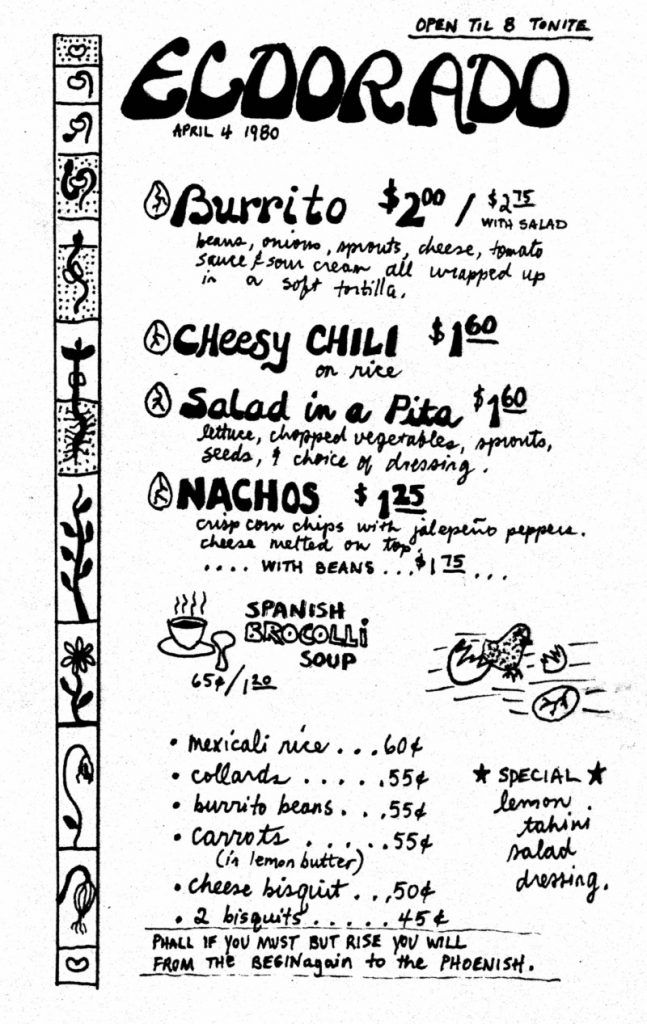 When I first arrived at the Eldo, as we called it, The B-52’s were a recently anointed legend. They had just put out their hit first album and had moved to New York. Less than a year previously, Fred Schneider had been waiting tables at the Eldo, and The B-52’s had been practicing in the room behind the kitchen, in what had once been, the story goes, the embalming room in the funeral home that had once occupied the place. Shortly there after, I saw The B’s perform at the Georgia Theatre, and my mind was appropriately blown.

There was lots of other music going on as well. The embalming room had been taken over by Turtle Bay, a band that later took the name Men in Trees. There were frequent solo guitar performances at the Eldo. I particularly remember the virtuoso finger-picking of Marion Montgomery and Les Jampole. There were a couple venues in downtown that my friends showed me — The Last Resort, T.K. Hardy’s, Sparky’s, and Tyrone’s O.C., where I first saw Pylon.

At the time, downtown Athens was pretty much a ghost town. Other than Wuxtry and Chick Piano, there was not much on Clayton St. besides a few dime stores that would close soon enough. Washington Street, just west of the Eldo consisted of a shuttered furniture showroom, a couple of empty store-fronts, and a shabby-looking food machinery company. At the end of the block, where the 40 Watt is now, was the Potter’s House thrift store. Up the hill to the east was a parking lot and the Athens Observer, our weekly paper at the time, whose staff were faithful Eldo diners. (As a general rule, anywhere you see a parking deck today was in 1980 a parking lot — except the one at College and Washington, which once was the site of the Triple Cinema.) A couple blocks away at the corner of Pulaski and Broad St. was the Phoenix natural food store to which we ran many errands when we ran out of some vital ingredient. Somewhere nearby, Rick the Printer had a coffee shop – there were several different locations at different times including where today the Caledonia and the Go Bar are. 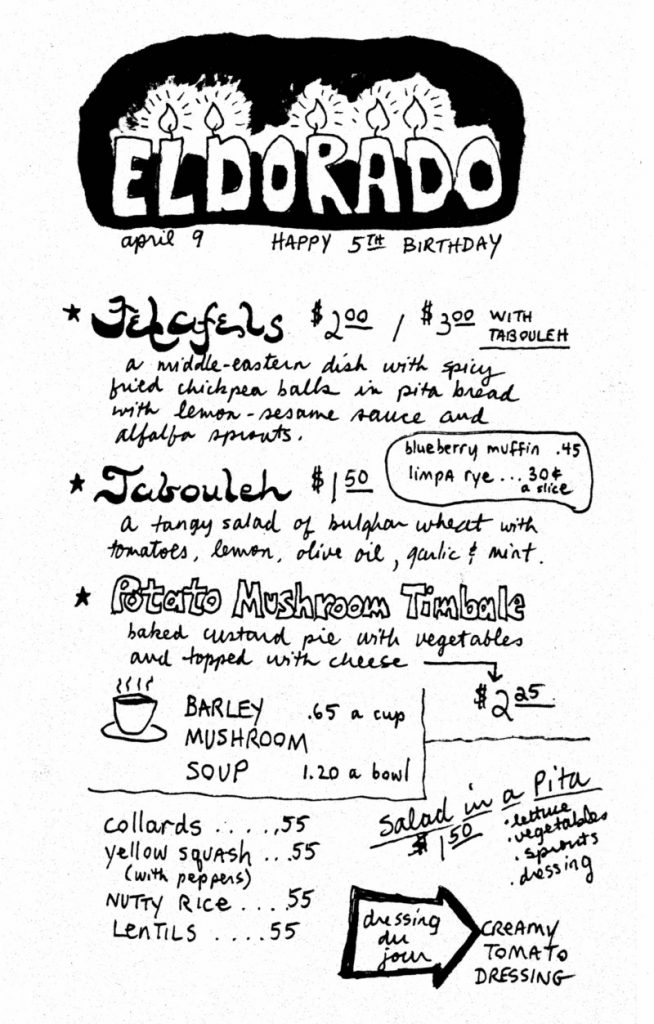 In January of ’79 I rented (for $90/mo.) the house at 187 Tibbetts St., just off Pulaski by the railroad tracks. I was playing music with a lot of different people. Ken and I continued to play some Dead tunes and at some point played the open mic at Tyrones. Lu and I worked on learning several Bowie and Roxy Music songs. Sometimes, Alan Walsh (future Squalls bass player) who was a cook at the Eldorado, and Tom Johnson who was hanging out, and I would go into the old embalming room after closing and “borrow” the Turtle Bay equipment and have hours-long jams. We called these sessions Bach Lava.

In researching this article, I’ve gone through some old notebooks. One item I found was the April 1979 receipt from Chick Piano from when I bought my white TEISCO Apollo guitar. (Many guitar people call it a Mayqueen, but it’s not. Although it’s the same shape, the pick-ups and set up are quite different.) I also came across some lists used in planning the 1980 Eldo Christmas party. The band consisted of myself, Ken, Alan, Mig Little (Eldo cook and future Squalls drummer), Lu, Peter Cline (Love Tractor Mark’s brother and Eldo waiter), Allen “The Baker” Clement, and Steve May. I can’t recall who played what, but the song list included songs by the Grateful Dead, Roxy Music, Talking Heads, and Bowie, along with some classics like “She’s Not There,” “For Your Love,” “Poke Salad Annie,” and “The Letter.” I wish I had a tape! 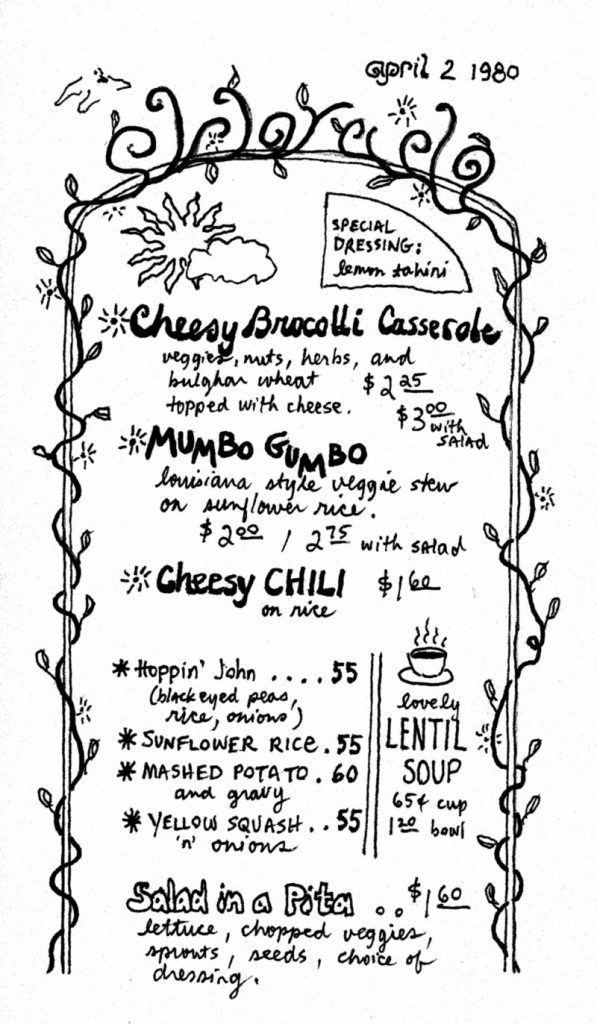 At some point, I became the person in charge of creating the lunch menu for the Eldorado. Each day, after either having worked the breakfast shift or just coming by to eat breakfast, the lunch cooks informed me of the day’s entrees, and I would write out the menu and go to get copies of it made. There was a small copy shop (copies were fairly new in those days) on Clayton next to Chick Piano where I would get them copied, although later I would go to Kinko’s, which had higher quality reproduction. When in high school, I became fascinated by the “psychedelic” lettering in San Francisco posters and so I transferred that fascination to the Eldorado menus, each day creating a new logo for the restaurant to memorialized many an event, whether it be a holiday like April Fool’s Day or a more personal event such as the wedding of Joel Cordele and Alice Samson. (See a photo gallery of Eldorado menus here).

The Eldorado was a little art colony populated by musicians, painters, sculptors, photographers, potters, poets, and writers. We all worked together to cook healthy food for our customers. After work we would hang out, go swimming at Ball Pump, go for walks, make art, play music, go to see music and dance. Same as it ever was.

Cue “In My Life” by the Beatles.

On Saturday, July 16, The Squalls will perform as the featured act at the 7th annual Tomatoes at Terrapin, a benefit for the Athens Nurses Clinic, which is celebrating its 25th anniversary in 2016. The event at Terrapin Beer Co. will run 4:30 p.m. to 7:30 p.m. and features sandwiches made with locally grown tomatoes. For tickets and more info, visit: athensnursesclinic.org 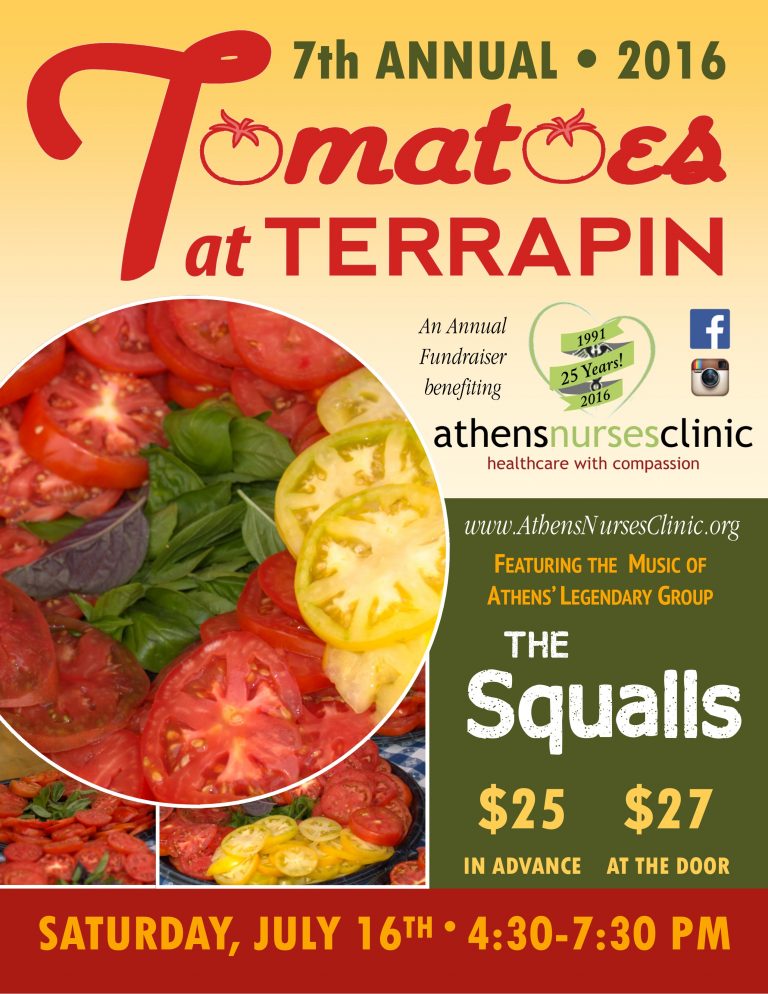