Vanessa Briscoe Hay first became acquainted with the Manhattan Cafe when she ducked into the bar in 2005, attempting to ditch an overzealous Pylon fan who had followed her from the 40 Watt club.

Recalls Hay, laughing: “I walked over to the table where Michael and Curtis were drinking PBR tallboys and said, ‘Oh, look! two other members of Pylon!’ and then I took off! But I knew I’d be back. It was such a cool looking place.” Hay likes the vibe so much she once performed in the space with just a pianist accompanying her vocals.

Owned and operated by Joey Tatum since 1995, the Manhattan Cafe looks like the 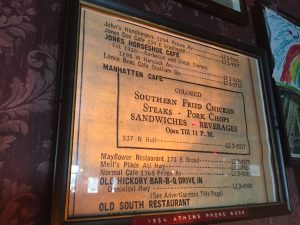 set of a David Lynch film, thanks to Tatum’s tasteful junking obsession. But the space and the name in the Hot Corner section of downtown Athens dates back further. A blown up ad of the 337 North Hull Street fixture from the 1954 Athens phone book hangs on the wall memorializing its history as a black owned and operated full service restaurant: “Manhatten Cafe, Colored, Southern Fried Chicken, Steaks, Pork Chops, Sandwiches, Beverages, Open till 11 p.m.”

At the corner of the bar hangs a plaque honoring the memory of former Manhattan Cafe regular, Athens poet and historian John Seawright who would hold court, hoisting his trademark Guinness with drinking buddy, poet and UGA literature professor Coleman Barks. 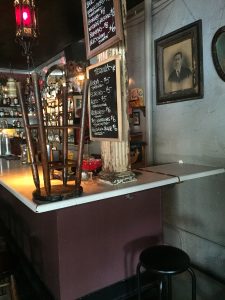 “This is where John always sat,” says Hay. He worked with Coleman Barks on his Rumi translations.” At age 79, Barks still frequents the stool next to the plaque whenever he’s in town.

For a long time after his 2001 death, the bar honored Seawright by turning his barstool upside down. In tribute to him, Hay inverts the late poet’s stool on the counter top, recalling, “John Seawright was probably the smartest man who ever lived in this town.”

Almost as much of a fixture at the Manhattan Cafe is Bobby Eberhart, a local singer and guitarist who indie music fans will fondly recall from the 1990s Athens act Mrs. Atkins. Explaining how he came up with his signature cocktail, Eberhart says, “I just love combining the Asian flavors together,  especially ginger and orange. It just works.”

Recalling her introduction to Manhattan Cafe 11 years ago, Hay says her encounter with a would-be stalker wasn’t all bad.

“I made some new friends that night,” she recalls. “[Elephant Six collective member and Elf Power guitarist] Bryan Poole and Jason NeSmith (her future bandmates in Supercluster) were playing at the 40 Watt. When this guy started invading my personal space, I went down to the front of the stage, thinking ‘There’s no way he’ll follow me down here.’ I met Jason for the first time that night when he reached down from the stage, shook my hand and said, ‘You’re the reason I moved to Athens.’ I remember being very flattered because they were really good. And now, Jason and I play in Pylon Reenactment Society together so I guess it all worked out. We should probably give that guy a medal!”

Dancing On The Tables: A Celebration Of The Athens-Atlanta Music Scene, Starring The B-52’s, The Fans, The Brains, Glenn Phillips and some act named R.E.M.! Thanks To One Dedicated Fan And A Crazy Scavenger Hunt, “Pylon Live” Is Finally Here