Eldredge ATL July Guest Editor and Pylon vocalist Vanessa Briscoe Hay on why she selected Little King’s Shuffle Club, 223 W. Hancock Ave. as one of her favorite downtown Athens spots: “The third incarnation of Pylon began here in 2004. The bar wasn’t even officially open yet. Randy had said, ‘I wanna play together again, just for fun’ and we all agreed to it. We had been practicing. Suddenly, [Pylon drummer] Curtis [Crowe] got a call to go work in Hawaii on a new TV show, ‘Lost.’ We had to find a place to play before he left for several months.

We wanted it to be some place nobody had played before, it had to be downtown and it had to be fun. Little King’s Shuffle Club fit all those requirements. We didn’t want it to be a big deal.

I was expecting 75 people to show up because it hadn’t been officially announced. We had just told our friends. But word got out. They moved the furniture out of the room. People started driving in from everywhere. People brought their kids! WUOG-FM signed off the air so all the DJs at the radio station could come. There was no stage yet so we just played on the floor. We thought it was going to just be a little party. It was a complete madhouse. But it was really, really fun.” 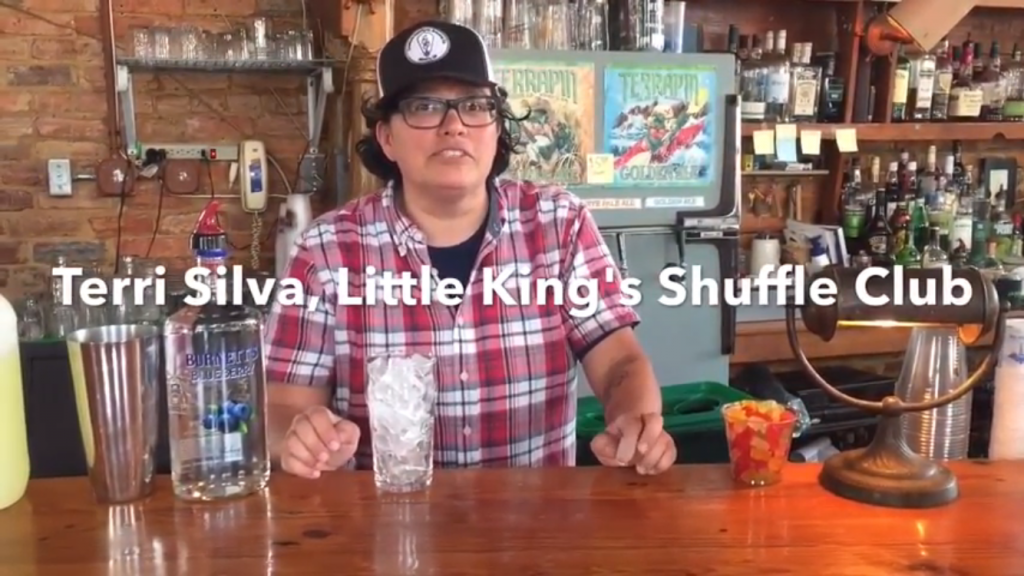 Fill a pint glass with ice

Fill the rest of the glass with lemonade

Add a handful of fresh or frozen blueberries

Shake the contents of the glass, add a lemon wedge to the rim for garnish and enjoy!

Related  From 'Full Monty' Stripping to Playing Christ in a Hoodie, Haden Rider Is Up For Any Challenge
Memories of Eldorado, the Athens Eatery Where The Squalls, B-52’s Once Worked Dancing On The Tables: A Celebration Of The Athens-Atlanta Music Scene, Starring The B-52’s, The Fans, The Brains, Glenn Phillips and some act named R.E.M.!

With ‘Stranger in the Lake,’ Atlanta Author Kimberly Belle Offers a Thrilling Getaway for Our Shut-In Summer