The Alliance Theatre Is Holding An Open Casting Call With Kristian Bush and Janece Shaffer. No Pressure.

The upcoming world premiere of Atlanta playwright Janece Shaffer’s new work “Troubadour” with 11 new songs penned by Sugarland’s Kristian Bush, music direction by Brandon Bush and directed by Alliance artistic director Susan V. Booth is, without a doubt, one of the most anticipated productions of the city’s upcoming theatrical season. In a rare move, on Monday, July 11 beginning at 9 a.m., the Alliance is hosting an open call for Atlanta acoustic performers to land one of the four lead roles in the 2017 production.

Set in 1951 Nashville, the Alliance is looking for singer/guitarists who can perform roots country music with the spirit of Hank Williams and the pluck of Patsy Cline. Also, it would be helpful if you had some acting chops. Oh, and if you’re one of those people who stand in line for singing competitions because your friends tell you that you sound awesome singing Night Ranger songs at karaoke after five Fire Ball shots? Please stay away.

Here’s everything you need to know about the characters, the songs and the story, thanks to Janece Shaffer and Kristian Bush, who chatted with Eldredge ATL about their first collaboration together.

“At their core, these people are performers,” explains Shaffer, who was inspired to write “Troubadour” after a visit to Nashville’s Country Music Hall of Fame. “This is about a father who rejects a son on the eve of his retirement and the son has to figure out if he has the talent, the vision and the guts to step forward on his own. The characters spend three days in a dirty gas station figuring that out.” 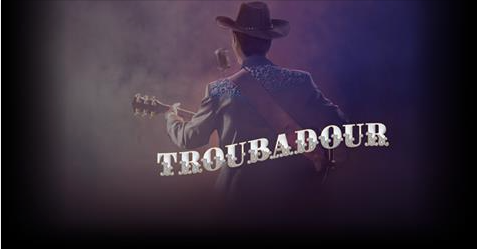 The roles, according to the playwright are:

Billy: In his mid-50s, the king of country music. “He’s a guy that just by looking at him, you know he’s been on the road for a long time. There’s a worn-ness to him. He has charisma. Music pours out of him. It’s effortless. He’s steely.”

Joe: Billy’s 20-ish son, handsome without effort. “He’s a young man standing in his father’s shadow who has no idea about how much talent he has. He has no self-awareness and is unformed in a lot of ways. He knows what it feels like to live on the road but there’s a sweetness and a gentleness there.”

Inez: Female, 20ish singer and guitarist. “A girl who’s trying to overcome fear. She’s a songwriter with a spiral notebook full of songs. She’s got a Patsy Cline southern pureness. She’s the girl who lives next door who has a secret genius about her.”

Pooch: 50ish guy. “He’s a character. He’s the radio host who knows everybody and everything. He’s a ladies man and he’s a smooth talker. He’s a flirt. He’s known Billy and Joe their whole lives. He and Billy used to sell hosiery on the radio together.”

Oh, yeah. You leather-lunged Broadway belters? You have permission to sleep in on Monday. Shaffer is quick to point out that “Troubadour” “is a play with music. “No one bursts into song singing about their breakfast in this show,” she says laughing.

For Bush, a guy who is writing music for theatre for the first time, that was precisely what was exciting about collaborating with Shaffer. “There was this effortlessness to it, like the way you feel when you’re writing your first album and everything is new and exciting,” Bush explains. “It was fun to ask, ‘Who is this Billy guy, where did he come from and what does his catalog of songs sound like, spanning a career from the 1930s to 1951? Then there’s this young female songwriter who arrives fresh from Tuscaloosa, Alabama with a notebook full of songs. What do they sound like? Each of these characters demanded some strong song crafting. The songs are expressions of the characters, rather than the more traditional musical route of being expressions of the characters’ situations. That’s what makes this such a unique challenge for me. You had to dive deep into their skin in order to develop a deep understanding of these people they are.”

Bush spent his youth cutting his teeth performing at Trackside Tavern before landing his first record contract as one-half of the acoustic duo Billy Pilgrim so he knows first-hand was it feels like to be Joe. Now with two Grammys, five Academy of Country Music Awards, one American Music Award and four CMT Music Awards on his mantle, can Bush envision a future like Billy’s?

The singer says performing the show’s title song live in concert has already proved “spooky” for him. “It’s the day before he retires,” Bush explains. “’Troubadour’ is the one song he writes while the play is happening. It talks about the end of a career.” Bush laughs and adds, “I’m hopefully not at the end of my career just yet. I haven’t finished saying all the things I want to say. But, that character is and it was interesting to try on his clothes for a few minutes.”

Shaffer has this parting advice for folks who show up Monday with acoustic guitar in hand. “I want every person to come in and just claim these roles. I want them to play the best they’re ever played and bring their heart into the room. I want you to walk in and surprise us.” 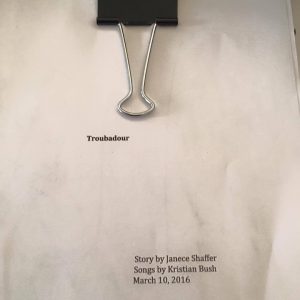 Adds Bush: “Bring your best. I didn’t spend all this time getting from where you are to where I am to not make this awesome! I feel like I have one shot at writing a musical and if you think I’m not going to give it every ounce of everything I’ve learned over the years, you’re nuts.”

The 20-year music business veteran also has some reassuring words for those who won’t get cast on Monday. “I’ve learned you get more than one chance in life,” says Bush. “Whether this ends up being right for you is kind of the director’s call. I spent most of my longhaired twenties in complete anxiety that I was only going to have one shot. And so, I prepared and over prepared. Had I known back then that I could get it wrong and still get it right later on? I would probably have a lot more of that blond hair on my head now!”

For full details, on Monday’s open call for “Troubadour,” go to the Alliance’s website.