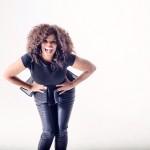 Like most of us, one of 2014’s highlights for Eldredge ATL November Guest Editor Keisha Jackson was Outkast’s much-anticipated 20th anniversary reunion world tour. Unlike most of us, however, as one of the featured vocalists on the tour, Jackson had an all-access pass to all the action. Technically speaking, she had 47 of them, one for each show on the tour. In an exclusive photo diary for Eldredge ATL readers, Jackson takes you on a guided tour from her unique vantage point.

Editor’s Note from November Eldredge ATL Guest Editor Keisha Jackson on how her long history with Big Boi and Andre 3000 resulted in being a part of one of 2014’s hottest world tours: “By 2000, I’d done session work on a few Dungeon Family songs and various LaFace Records projects. Then one day, I got THE call! I was asked if I had a passport and if I were available to leave for a six-week European tour in five days to promote Outkast’s new ‘Stankonia’ record. Yes and Yes! The level of artistic freedom we had on stage was unbelievable. After the first two shows, it was very clear that we were having an impact on the WORLD. It was mind blowing!”