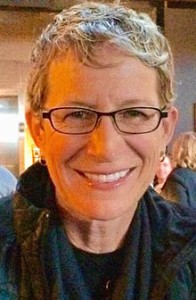 Just in time for All Hallows’ Eve, Vincent Price’s daughter, author and interior designer Victoria Price arrived in Atlanta this month with a stack of the brand-new 50th anniversary edition of her parent’s legendary cookbook, “A Treasury of Great Recipes” (Calla Editions, $50). Written by the Hollywood actor and horror movie icon and his wife Mary Price and first published in 1965, the book helped to usher in the age of the celebrity cookbook.

For food aficionados, the book’s lasting legacy is a tribute to the intense globetrotting the couple endured to research, capture authentic recipes, photograph food and record customs for the weighty 455-page tome. From Madrid’s Palace Hotel and The Ivy in London to snacking on hot dogs at Dodger Stadium, the book is brimming with Price’s trademark witticisms and observations. The cookbook has even spawned a tribute website, Cooking With Vincent. 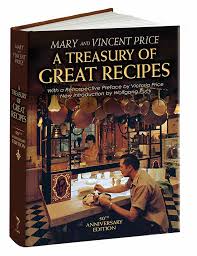 Now, the couple’s daughter Victoria, the author of meticulously researched “Vincent Price: A Daughter’s Biography,” has retraced her parents’ global travels to add fresh perspective to the book, published with a new foreword written by family friend Wolfgang Puck.

While her father died in 1993 at age 82, Price is thrilled that his legacy is thriving, thanks to his work being seen almost daily on Turner Classic Movies and fans across the country throwing revival screenings of his work. In town for a book-signing at her Williams College classmate Mitchell Anderson’s restaurant Metrofresh in Midtown, Price sat down with Eldredge ATL over a cup of herbal tea to discuss her father’s fearlessness in film and in the kitchen (he mastered making soufflés, after all). 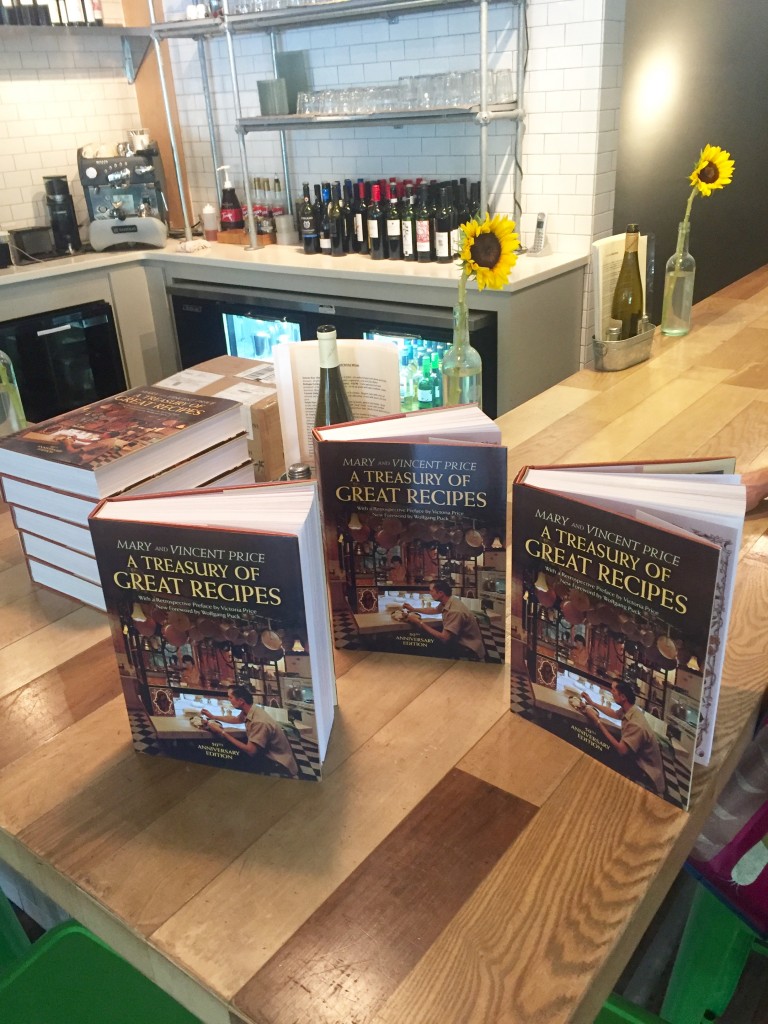 Q: The argument could be made that your father came to write this now iconic cookbook through genetics. Your great-grandfather, Dr. Vincent C. Price invented baking powder and your grandfather Vincent L. Price was a candy manufacturer. Food was kind of coursing through your father’s veins, wasn’t it?

A: I still have tins of my great-grandfather’s baking powder and his vanilla extract bottles. My father loved bringing joy to people, through his work in film and through food. My parents would come home from a trip and throw an amazing dinner party where they would recreate the food from their travels. My mother was a Broadway costume designer so they always looked the part and my father is Vincent Price and who wouldn’t want to go to a dinner party with Vincent Price! I remember them bringing home kimonos for guests to wear. This book captures the essence of how they traveled and how they shared those experiences with friends. The book became an extension of that. 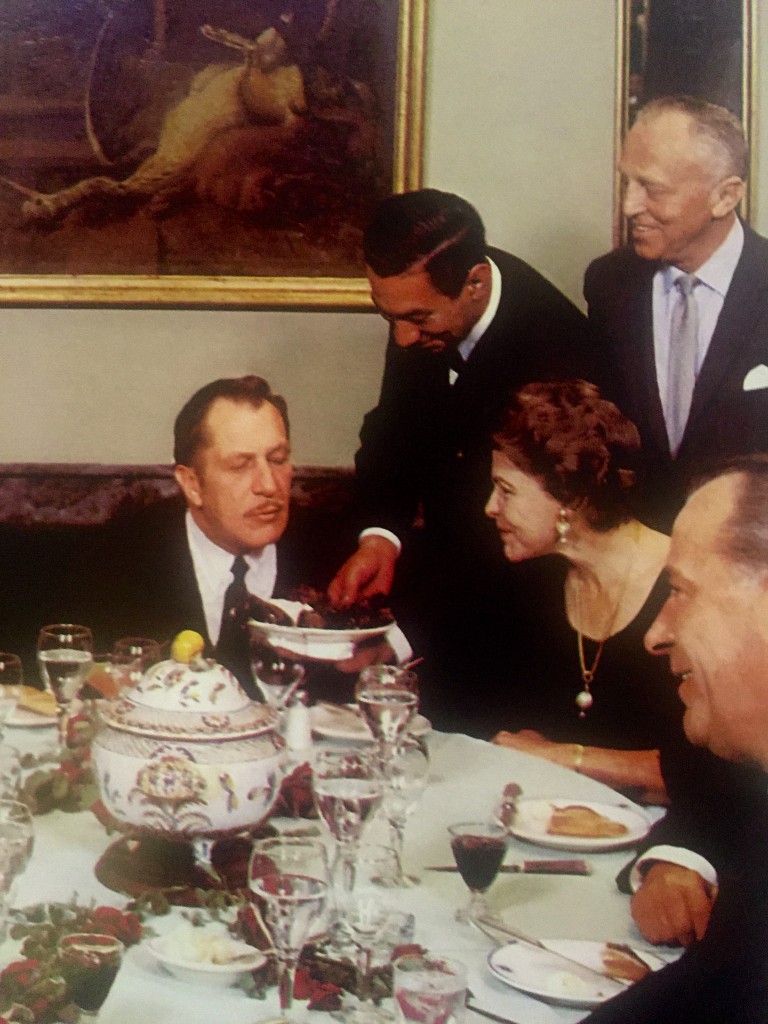 Q: You were three when “A Treasury of Great Recipes” came out in 1965. Before the reissue, readers were going on eBay where a first edition was going for $300. Why was it important for you to reissue this in a new 50th anniversary edition?

A: For me, personally, it was important because by the time I got to the age of consciousness in our household, it was merely referred to as “the cookbook.” As in capital T, capital C, like there were no others! (laughs). I recognized that it wasn’t just a cookbook but it was the embodiment of my parents’ philosophies of life. It came down to three things: Explore, Savor and Celebrate. When I learned that it was the eighth most popular out of print book, I knew we had to get it back out there. Madonna’s “Sex” book was number one and “A Treasury of Great Recipes” was number eight! I mean, “Sex” I understand. Everyone has a connection to that. But this is a cookbook! But it gave people an idea of what was possible. In the 1960s, it gave people an idea of how they could live. Now we can turn on the TV with 300 channels and get that. You weren’t going to get that by tuning into “The Lawrence Welk Show.” Well, not unless you loved polka! 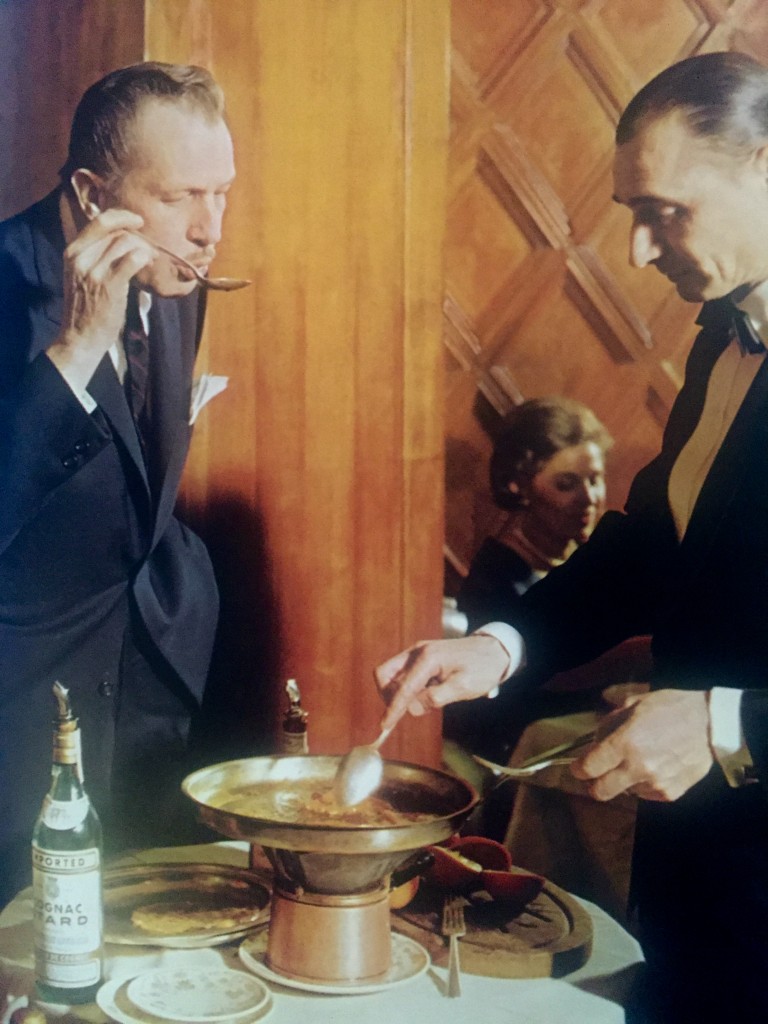 Q: For the anniversary edition of the book, you retraced a lot of your parents’ steps It wasn’t just “Let’s just slap a new cover on it and get Wolfgang Puck to write a foreword.” What did you learn from going on those visits and did it feel like getting to spend more time with your parents?

A: Absolutely. Road trips were the best things we did as a family when I was growing up. We had this early milk truck of an RV and we went all over. We got out of Hollywood and drove across America. So while everyone was looking at us and admiring our glamorous lives, we were out driving across the country. I got to drink A&W root beer at drive-ins and go into a diner and have grits for the first time. My dad was just so excited for me to see the world and try things for the first time. He made it so much fun. Sadly, what I discovered was maybe 20 percent of the restaurants they explored 50 years ago in this country are still there. But in 2015, over 80 percent of the European restaurants mentioned in the book are still there. Permanence and legacy are valued there. In America, we’re much more focused on what’s the next hot thing. 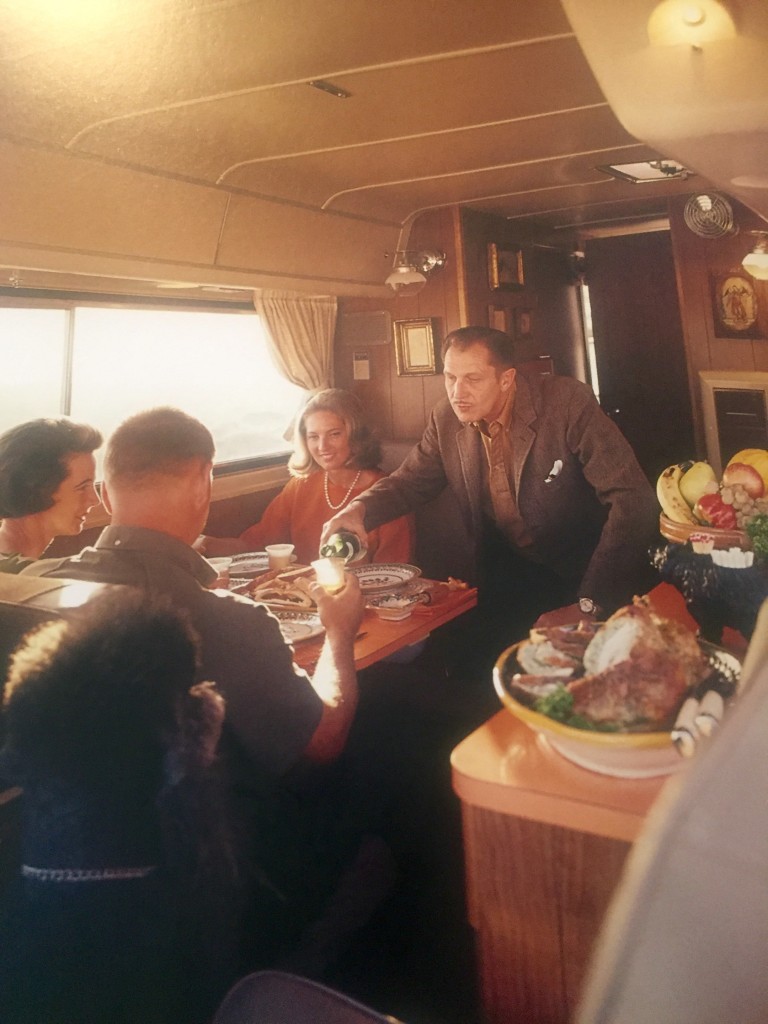 Q: Take us back to the kitchen of your childhood. What was the favorite thing your father cooked for you?

A: My favorite thing that he made was a soufflé. It was made with very sharp cheese. Soufflés were hard to make. They can be like lead weights. My father’s were so fluffy but with that crispy top. It was so good. He served it with this garlic-dressed green salad that was unbelievably good. I would go back in time to have that meal right now, it was so good. My father had these big beautiful hands and I can still picture him tossing those salad greens in this really worn wooden bowl that probably had 20 years of salads tossed in it. My mother was a baker. She made unbelievably delicious desserts. I loved anything chocolate. If a cake was going to be baked, I was going to be there to lick the beaters. 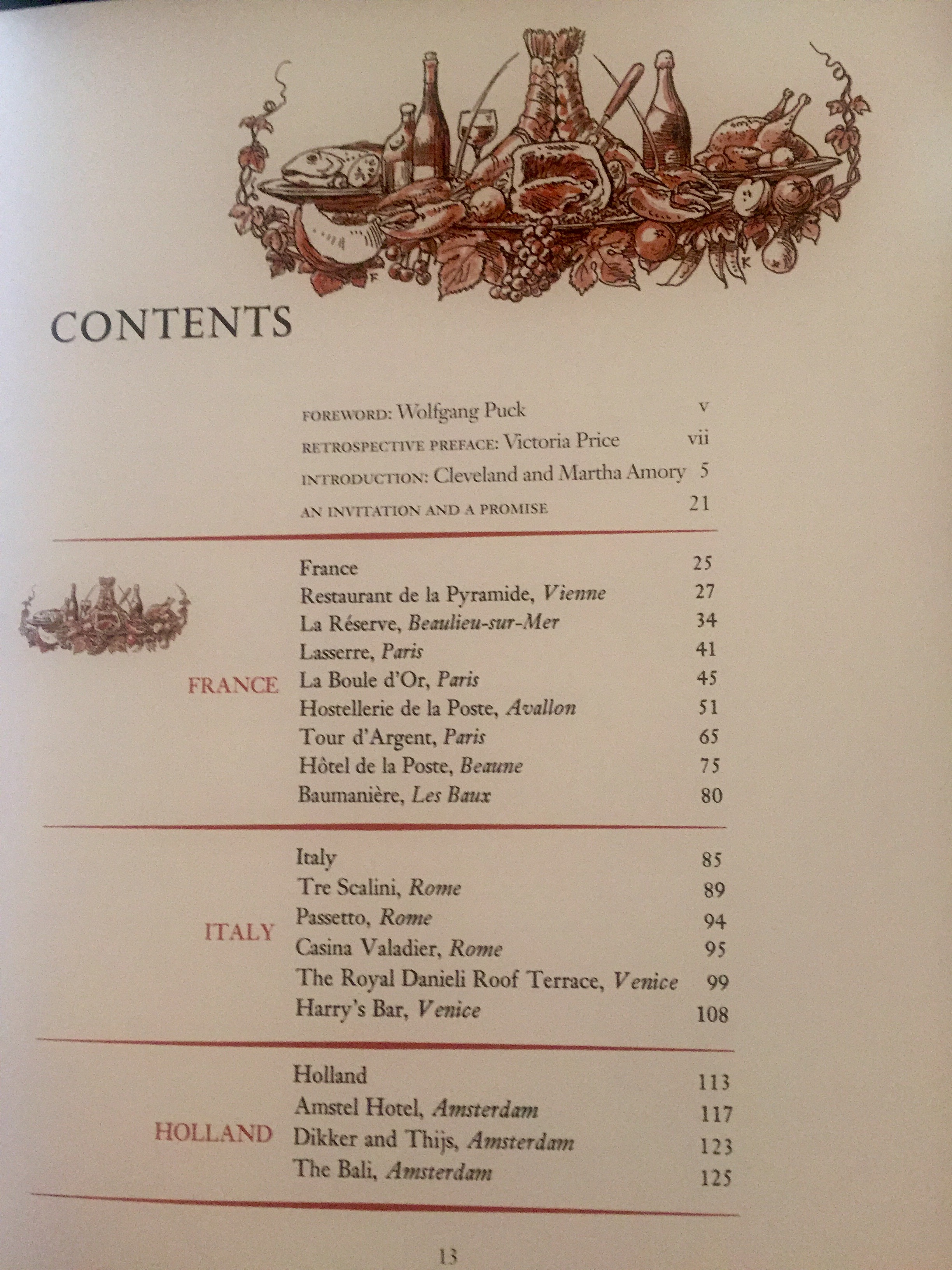 Q: There’s so much of your father’s voice contained in this cookbook. It was among the first celebrity cookbooks to reach the bestseller list. What’s important to you about retaining your father’s voice and his spirit on the printed page 50 years later?

A: My father said “yes” to life. To me, that comes through in these pages. People have shared with me that they read this book out loud to each other, sometimes reading it as Vincent Price. I met a couple in Austin the other night who told me, “We read it to each other before we go to sleep at night.” I loved that. I met another couple who told me, “When we got married, we’re not really religious so we didn’t know what to ask the minister to hold. We loved your father and mother’s book so much we had him hold ‘A Treasury of Great Recipes!’” (laughs) It’s the best compliment you can give, right?!

Related  'A Journey of Love and Loss': Jamie Chung Discusses Her New Film '1985' 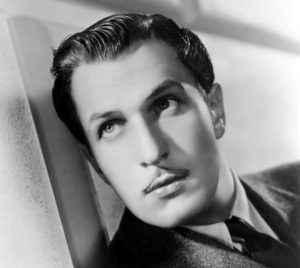 Q: Here was this classically handsome man with this amazingly theatrical voice and yet your father didn’t gravitate toward leading man roles. Why?

A: He was not comfortable being a leading man. He didn’t think of himself as handsome. He thought of himself as an outsider. He wanted to be a character actor. The actors he admired most were Jimmy Cagney, his friend Edward G. Robinson and Spencer Tracy. But he didn’t look like them. So Hollywood really didn’t know what to do with him. He wanted to play characters. Eventually, he became famous for playing Vincent Price. He wasn’t famous for playing Dracula or Frankenstein’s monster but rather he carved out his own persona in horror.

Q: It’s October, it’s your father’s big month. He’s back on our TVs scaring us, largely thanks to Turner Classic Movies here in Atlanta. You’ve said that growing up, you weren’t fond of your father’s horror movies, many of which involve him playing a villain, committing unspeakable acts of violence and then being killed at the end. Have you gone gotten to a point yet where you’ve sat down to reassess his horror movie performances?

A: I have. I go and watch them with fans and I also show clips in the talks I give on my father. One of my favorite things to show is my father killing my [real-life] stepmother [Australian actress Coral Browne in 1973’s “Theatre of Blood”]. I have to admit it’s kind of a vicarious thrill writ large on the silver screen. 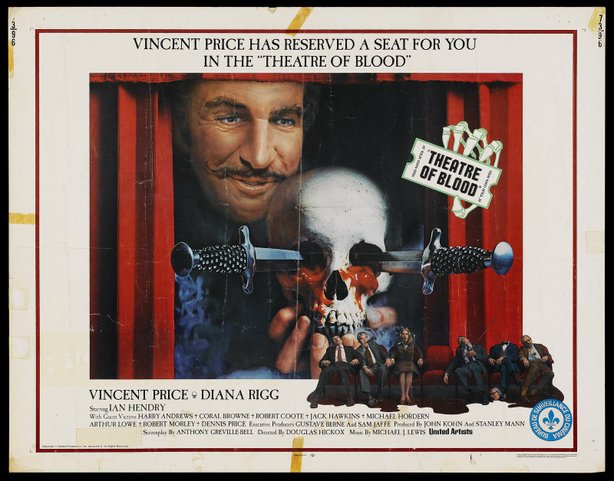 Q: You didn’t have the most constructive relationship with your stepmother, did you?

A: (laughs) It was a mixed blessing. But it was still a blessing.

Q: What I loved about your father’s work is that even in a minor movie like [1959’s] “The Tingler,” he’s right there in the zone and swinging for the fences, completely committed, isn’t he?

A: He was having the very best time! They showed “The Tingler” at one of the horror conventions recently. I ended up grinning all the way through it. Even the films that really scared me when I was younger, like [1968’s] “Witchfinder General,” a really malevolent movie, I still really enjoy watching him become that person.

Q: Your father was really fearless about taking on roles that required him to do terrible things on screen. Nothing was taboo, whether it was grisly murder, encasing someone in molten wax or mutilations, he rolled up his sleeves and went to work. In the age of “Saw,” that’s not such a big deal but it was when he was acting in these films. Is that your perception as well?