‘A Journey of Love and Loss’: Jamie Chung Discusses Her New Film ‘1985’

In the new critically acclaimed AIDS period drama “1985,” actress Jamie Chung, who’s perhaps best known for playing Blink on the hit Fox Marvel series “The Gifted” and portraying Mulan on ABC’s “Once Upon a Time” is demonstrating her considerable talents for serious drama. In the beautifully shot black and white indie film now playing in select cities, Chung plays Carly, the former high school girlfriend of Adrian (Cory Michael Smith), a closeted New York City professional who arrives home for Christmas at his conservative Christian family home in Texas with gifts and one enormous secret – he’s dying of AIDS.

This fall, Chung took some time away from the Atlanta set of “The Gifted” to discuss shooting the latest film from writer-director Yen Tan and co-starring Virginia Madsen and Michael Chiklis at “1985’s” Atlanta premiere during the Out on Film festival. To the delight of fans of the popular Marvel Comics mutant TV series “The Gifted” now in its second season, the actress brought along some of her cast mates to see the film with her. Eldredge ATL moderated a post-screening conversation with Chung. The following is an edited version of that conversation.

Q: You’re a busy actress these days. What attracted you to this script?

A: It’s been years now since we shot this movie. We actually shot “1985” immediately after we shot our pilot [or “The Gifted”] in Dallas. I had become friends with Cory Michael Smith when I did an arc on “Gotham” as well as Michael Chiklis, plus Virginia Madsen was attached. I remember reading the script and doing some research on the year 1985 and the AIDS epidemic. There was so much fear surrounding not understanding the disease, the fear of losing friends. There was so much loss for so many. What I loved about this script was that it focused on one person’s journey, one person’s identity. In the news media, there were all these people being lost but the news stories weren’t focused on their identities. “1985” takes us on a journey of this man’s love and loss and his farewell to his family. It was so moving to me, I had to be a part of it. The role of Carly was unique for me. I was lucky to grow up in San Francisco where there was this huge Asian community. But [“1985” writer-director] Yen Tan grew up in Texas where the film is set and told me, “Listen, it was hard being Asian in Texas.” He felt like an outcast. That’s why Carly and Adrian bond so well. They’re both outcasts in a way. He’s kind of revisiting this romance, this relationship he had before he found his true self in New York.

Q: You were two years old in 1985, what does it mean for you as a member of a new generation of creatives to revisit that era and honor these people?

A: Unfortunately, many of the themes in the movie, equal rights, for example, are still being fought for today. It was nice to be able to shine a light on topics that were so uncomfortable to talk about at home with your family, especially a family with such a strong Christian background. What was really beautiful was to play out these beautifully written scenes and navigate through those difficult but necessary conversations.

Q: This gorgeously photographed movie was shot on old school 16 millimeter black and white film. It’s an indie film so the budget was tight but I was amazed by just how long some of the takes are in some scenes. What were some of the challenges you faced as actors going back to that medium?

A: It was a lot of rehearsal, which is something you don’t really get working in TV or film anymore. We had a certain amount of film to work with and so it required some long conversations. For example, the scene Virginia Madsen and I shot on the living room couch? We needed to rework it and it was just a monstrous scene. We sent the crew away and we spent four hours talking about the scene and then we finally shot it and it took less than an hour. It was a lot different than how we work today with digital cameras, but as an actor, I’m really grateful to have this experience. 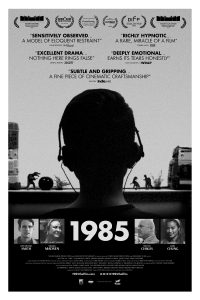 Q: You have this outdoors scene with Cory, which looks like it was shot near a viaduct. Again, there are these very long takes with not a lot of editing going on. Was that one of your more challenging scenes to shoot?

A: I have such an easy rapport with Cory, my scenes with him were really easy. Probably the most uncomfortable scene for us to shoot was when I climb on his lap and start to make out with him (audience laughs). There was a moment when I was like, “I’m so sorry!” It was realistically awkward! The scene in the diner was also memorable for us because it was 100 degrees in Dallas where we were shooting and the air conditioning broke in the diner. We were sweating immensely.

Q: Probably because I lived through it, I was particularly touched in the film when Adrian makes Carly promise to tell his brother how he really died. There was such a stigma about AIDS back then, people used coded language in obituaries. The phrase “died of complications from AIDS” had yet to be used. How powerful was it for you to go back to that time and explore that with Cory?

A: Cory plays such a selfless character in this film. That scene was really difficult to shoot just because it’s so heart wrenching. Tonight, I watched that scene again with Virginia and Cory in the car at the end of the film and it gets me every single time. The film is filled with those beautiful, quiet moments. In this day and age with everything we have available to us on TV, streaming and Netflix, everything explodes or is a Transformer. What I love most about this film are those quiet reflective moments that are played out, those uncomfortable awkward moments, when you’re, say waiting for a pie at a grocery store. I love how Yen lets those play out. It just humanizes everyone.

Q: Without giving any significant plot points for season two, what can viewers expect this year on “The Gifted?”

A: We all die (audience laughs)

Q: You realize that’ll be up on YouTube before we leave here, right?

A: (laughs) I’m just joking. I’m not sure what I can say. You get to meet new characters, you get to see the Morlocks and, unfortunately, we end up losing some characters, too. You’ll just have to watch!

Q: As the film starts its theatrical run this fall, what’s next for “1985?” What can we do as audience members to help get this film seen?

A: Just talking about it and word of mouth helps. Hopefully, it will also be on iTunes and Netflix and other platforms. If the movie spoke to you, tell your friends.

“1985” is now playing in select theaters across the U.S. For more information on screenings, visit the film’s website.