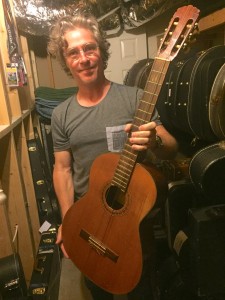 “You can come on back here if you want,” Collective Soul singer and guitarist Ed Roland shouts to me through a wall in his basement. “Just follow the sound of my voice.” And suddenly, I’m in a corridor made up entirely of some his impressive 150-ax guitar collection. Roland searches around a series of old guitar cases carefully stored on shelves until he finds precisely the one he’s looking for.

Pulling out a worn acoustic with two strings hanging off of it, Roland explains, “When I was 14, I wanted to learn how to play guitar but I didn’t know how. A friend of mine at school gave me his guitar. It’s even lasted through a flood. When we were 16, we were in a car crash together and he died. I’ve kept it all these years. It’s just really special to me. It represents him and his kindness to me. This is where it all started.”

In what may well be the ultimate rock star man cave, Ed Roland’s basement is chock-full of instruments he’s collected over the past 20 years and a couple that have been prized possessions even longer.

In an exclusive for readers and Collective Soul fans, Eldredge ATL‘s October Guest Editor takes us on a guided tour of some of his favorites from the collection. 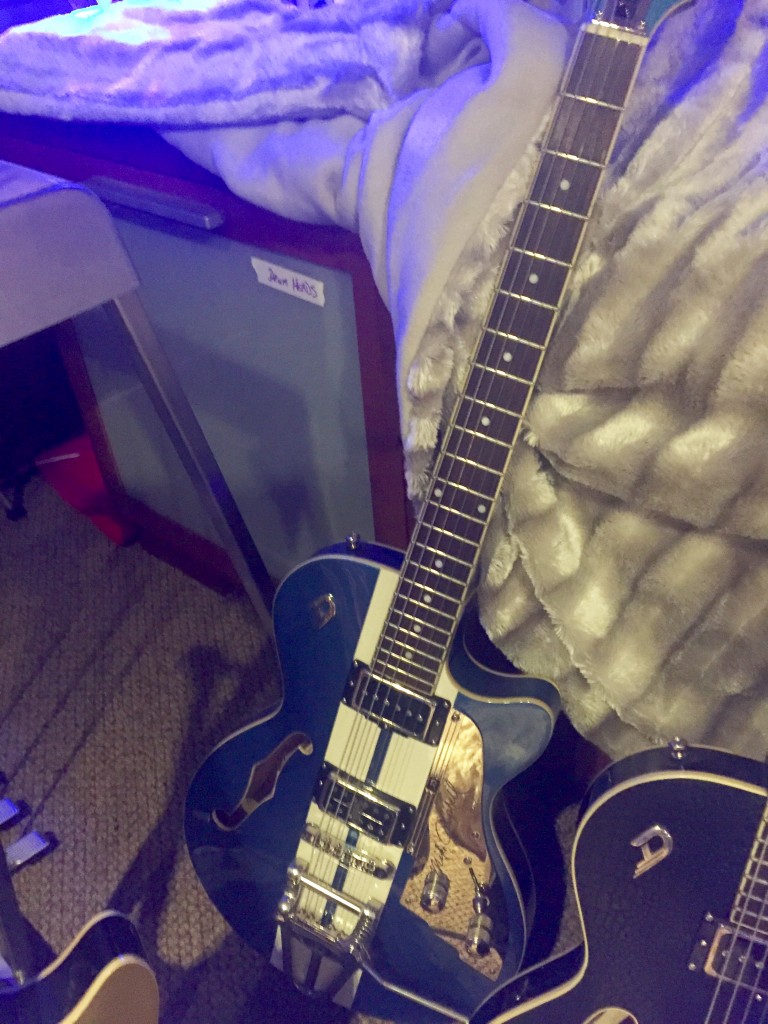 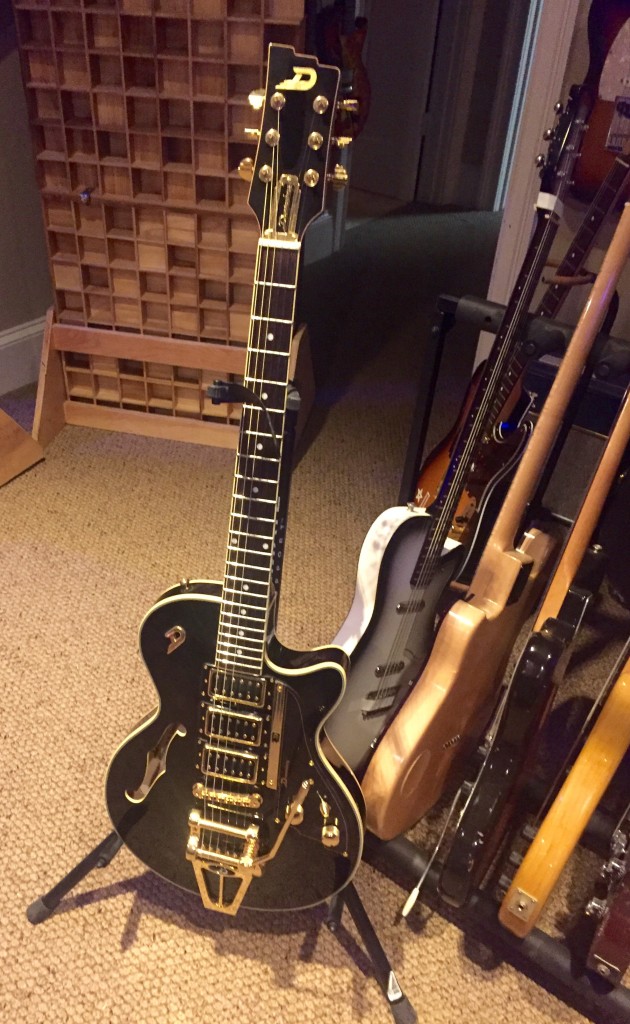 Duesenberg: “This is a Dusenberg, one of my newest guitars. The company, based in Germany, has been around since the 1980s. I’m really getting into them these days. I probably own about seven at this point.” 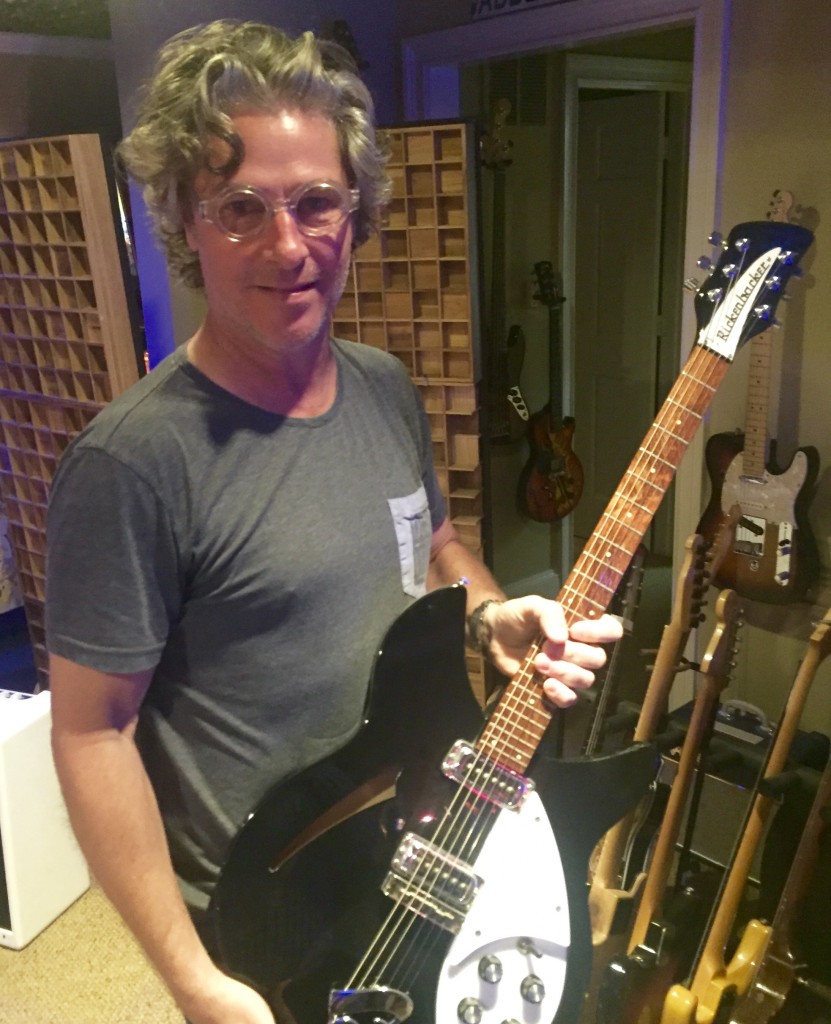 Rickenbacker: “This is the only guitar I had when we recorded the first record [1993’s ‘Hints, Allegations and Things Left Unsaid’]. I had one little amp and this. I used this little thing to write and record ‘Shine.’ I started writing ‘Shine’ in 1988 and probably finished it in 1991. I don’t use it much anymore but we’ve been through some stuff together.”

Paul Reed Smith: “This PRS is what you hear on our second record [1995’s ‘Collective Soul’]. This is what started my whole Paul Reed Smith collection. They were nice enough to endorse me so I got to create stuff I wanted on the guitars, like wings or E’s.” 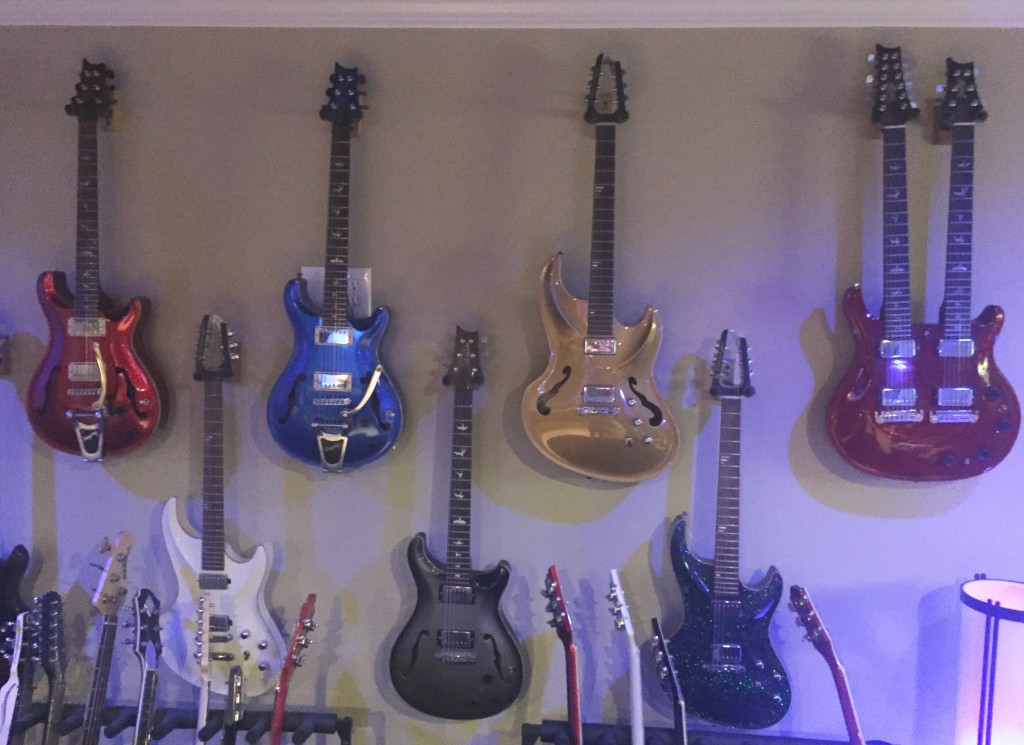 Guitar wall: “When my [now 17-year-old] son Lindsey was born, I started buying him a guitar for his birthday. When he turned one, he got a Gibson 64 Firebird guitar. It’s a crazy good guitar. For his second birthday, I got him red double neck PRS to represent two. He got them until he was 12 and then I started to lose count of which guitar I got him. It got a little insane!” 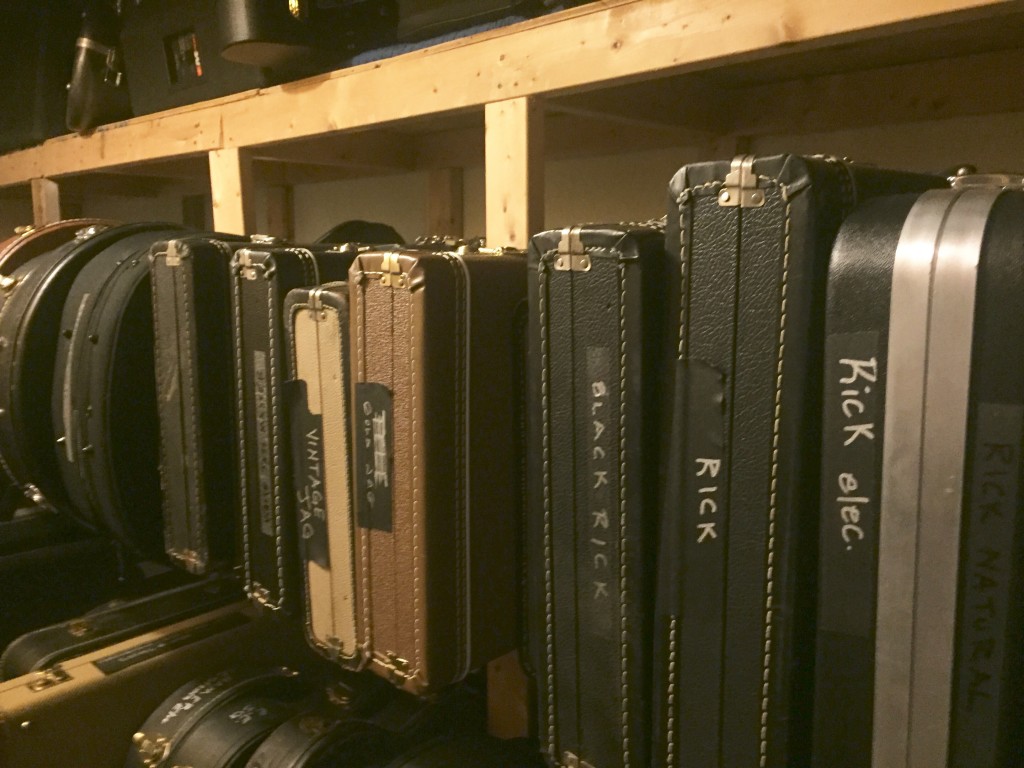 Rickenbacker cases: “I’ve got a bunch here and some in storage. When my son Lindsey comes over, has his pick of whatever he wants to play. He’s starting to dig into it a little bit. He wants to go to music school. He’s an amazing lyricist. A real old soul. He blows me away with what he writes.” 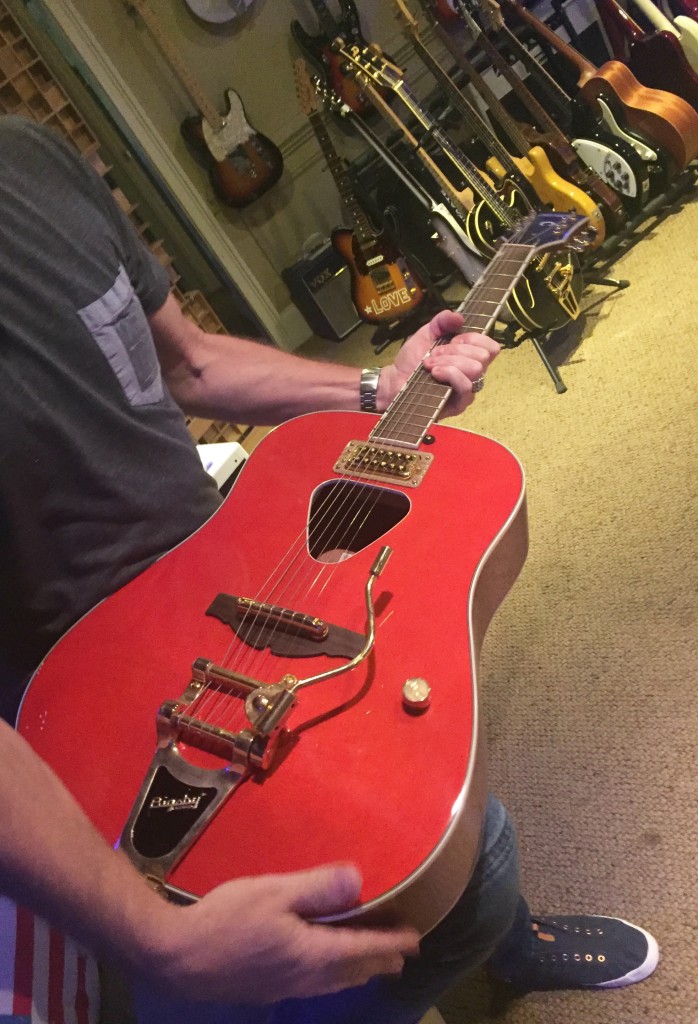 Gretsch Bigsby: “This is a guitar that I designed for Gretsch but I didn’t receive any credit for it. That still bugs me. I just saw one in a glass case the other day. I designed it so it could be both acoustic and electric at a good price so kids could afford it. It had a garage vibe to it that I liked. It has a wacky sound if you plug it in. I was real proud of it. They sold like hotcakes too.” 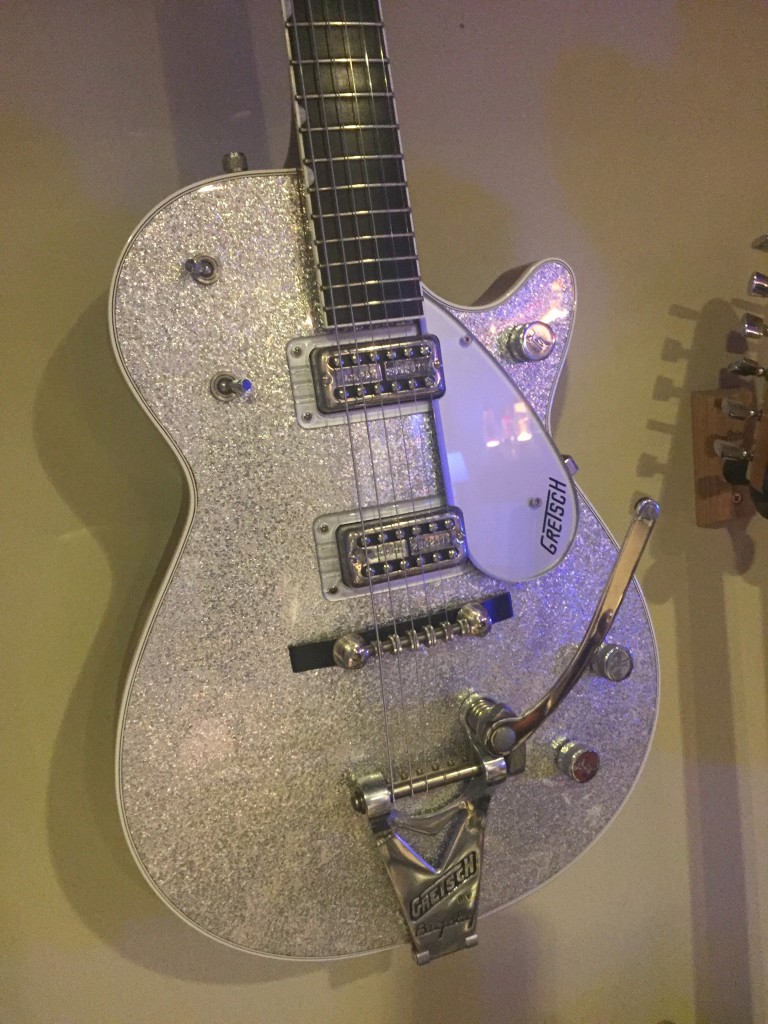 Gretsch Duo Jet: “I’m endorsed electrically by Gretsch. This is a Duo Jet. Back when we were in [pre-Collective Soul Atlanta rock act] Marching Two Step together, Michele Caplinger taught me to appreciate sparkly things! It’s just a cool looking guitar.”

“Revolution” replica: “This is what my wife Michaeline got me for my 50th birthday. They do these guitar reissues and this is an exact replica of the guitar John Lennon wrote ‘Revolution’ on. I’m a huge Beatles nut. We named our son Lennon. There were only a 100 of these made. The only thing different about his guitar is that his fingers touched it.”

George Harrison replica Fender: “Fender made 12 of these. This is what George Harrison and John Lennon both played. It’s the only Fender Stratocaster that I own.”

S. Talkovich: “I’ve started collecting guitars made in Atlanta by Stephen Talkovich. This is one of his. I’m real proud of it. Plus, he’s an Atlanta boy so I like buying his stuff. It’s just beautiful. So far, I’ve gotten three of them. My favorite thing is when a fellow guitar player comes down here and asks, ‘Can I play ‘em?’ I always say, ‘That’s what they’re here for. Pick the thing up and play it!'”

Gretsch E guitar: “The boys call me E so I thought, “Why not get a guitar with E’s all over it?” So this was specially made for me. It comes in handy if you’ve forgotten your name and it also cuts down on someone stealing your guitar!”

Sweet Tea Project mandolin and bass: “These are mandolins that were used on Ed Roland and the Sweet Tea Project recordings. The instrument in the middle is an actual bass. Isn’t that wild? It’s a little hard to play but when you plug it in, it sounds just like a bass. It’s a lot of fun.”