It was ferociously frigid down there, sitting in the dark watching Robert Osborne work. But for me, a studio set visit to Turner Classic Movies, an elevator ride deep into the subterranean, subzero recesses of Turner Broadcasting’s Midtown headquarters, was always like taking a trip to Disney World. And Robert Osborne was Walt Disney himself.

You’d quietly slip past the “NBA on TNT” studios where men in tailored suits would sit and rattle off the latest scores into the ether. Next-door was the Turner Classic Movies set where you’d wait patiently underneath the illuminated sign indicating that filming was in progress. When the light went dark, a publicist would graciously open the heavy studio door and there he was, sitting in one of his trademark red leather chairs, readying his next film intro or outro.

For more than 20 years, over the course of one week each month, Robert Osborne, the Academy Awards official historian, would fly from New York City to Atlanta to shoot an entire month’s worth of film intros and outros that would be broadcast in primetime the following month. He ended up sharing his love for and his immense knowledge of classic films with the world, attracting fans both young and old. As TCM fan Gene Wilder once told me, “My wife and I love Robert so much we go to bed with him every night!”

On Monday, Turner Classic Movies lost its most enthusiastic champion and first on-air family member when Osborne died at home in New York City at age 84. Since the network’s launch in 1994, the congenial host had dropped by our living rooms nightly with his traditional opening line, “Hi, I’m Robert Osborne,” to introduce classic films to millions of movie fans. He ended up filming more than 50,000 fascinating factoid-filled intros and outros without ever repeating a script. 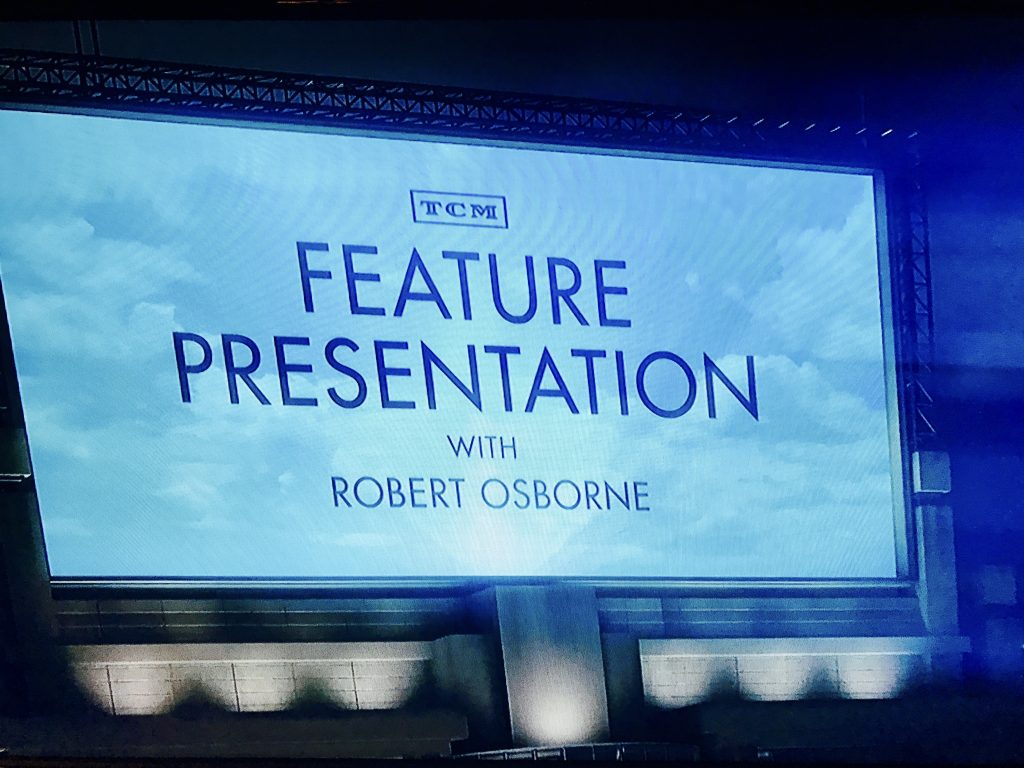 What most viewers didn’t know was that the longtime Hollywood Reporter columnist himself wrote and researched each of the intros and outros. Occasionally, one of Osborne’s own sentences would trip him up on camera and he’d ask director Sean Cameron to give him a minute. Osborne would then hop out of his chair, stride over to the TelePrompTer operator and together, they would line edit his copy on screen to smooth out the syntax to make it more broadcast friendly. The guy on set with the University of Washington journalism degree wasn’t bashful about fact-checking himself on the spot either (verifying, say, whether costume designer Edith Head had accumulated 27 or 28 Oscar nominations was important to him).

Over the years, I spent many hours sitting there in the dark, shivering on a chair in a corner observing the master film historian at work. There are very few people who work in television who are able to transmit their true selves onto the airwaves. Julia Child had that ability and so did Robert Osborne. And like Child, Osborne used the medium of television to teach as he entertained us. On screen and off, he was a warm, witty, stylish gentleman. He was always the smartest person in the room — without ever making the rest of us feel less intelligent.

Even if that person was Alec Baldwin, his co-host for three seasons of “The Essentials.” In 2009, for Baldwin’s second season co-hosting the venerable TCM Saturday evening series spotlighting the network’s most must-see films, I was on-set as the pair filmed a year’s worth of intros in just a few hours. They delighted in making the other laugh between takes. Baldwin, a dogged perfectionist, had his notes about each film strewn on either side of his chair, just out of camera shot so he could refer to them before attempting to match wits with Osborne on air. 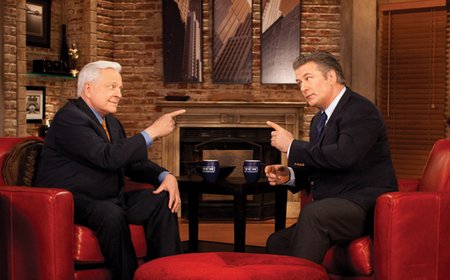 During a break in filming, the normally press adverse Baldwin (who had just won an Emmy for his role on “30 Rock”) agreed to a brief conversation with me in his dressing room, provided we stick to two subjects — his love of TCM and his affection for Robert Osborne.

The pair had enjoyed a spirited debate arriving at the final selections for the season. “The one argument we did have was over Alec wanting to do ‘Mutiny on the Bounty,’ the 1962 version with Marlon Brando,” Osborne told me laughing. Baldwin had come of age idolizing Brando’s method acting but Osborne preferred Clark Gable’s more grounded performance in the original 1935 adaptation. Osborne shrugged and said, “I thought Brando’s was an OK film but perhaps not an ‘Essential.’’’ For his part that season, Baldwin wasn’t keen on exploring an Osborne pick, the 1945 melodrama “Leave Her to Heaven.” Explained Osborne: “I found out that he didn’t want to do it because he had never seen it. So I made him a deal — I’d let him do the Brando ‘Mutiny on the Bounty’ but he would have to sit and watch ‘Leave Her to Heaven.’ Turns out, he loved it!”

As a reporter who covered the network and also as a longtime TCM viewer, I often had the opportunity to thank Robert for introducing and championing films that had largely been forgotten over the years, including the 1940 Fred MacMurray-Barbara Stanwyck Christmas charmer “Remember the Night” with a script by Preston Sturges. And starting at the 2004 Telluride film festival, he worked his magic reintroducing modern audiences to the 1936 romantic drama “Dodsworth,” a film that thanks to TCM’s frequent airings, has become a re-discovered classic.

Assessed Osborne: “It was a film nobody knows these days and it sounds kind of boring. It’s about this auto executive and his wife who go on a European vacation. The cast even sounds boring. Walter Huston is not a dynamic name and when you see a photo of Ruth Chatterton you tend to think, ‘I’m not interested in her.’ But it’s a movie that just gets you and it entertains you at the same time. That’s the power TCM has. You can take an obscure picture from 1936 and it can enjoy a whole new life when viewers discover it and embrace it.”

In 2011, Turner Classic Movies trained its cameras on its staff to serve as guest programmers with Osborne. And the official face of the franchise was delighted to share screen time with his knowledgeable colleagues who usually toiled behind the scenes. I was on set when he filmed segments with “TCM Underground” goddess Millie DeChirico and Turner digital brand manager Matt Pylant, who had selected French director Louis Malle’s 1958 film noir thriller “Elevator to the Gallows” with an improvised score by Miles Davis (he was such a fan of the film, he even he had the jazz soundtrack on vinyl). Remarkably, it was a film Osborne had never seen. But between shots, TCM’s film professor in residence was thrilled to become the student once again.

On a break over a taco lunch with his TCM colleagues, when he discovered that I had already interviewed Pylant and I owned the Criterion Collection boxed set of the film, Osborne asked me why I liked the film. One movie fan to another, he grinned as I excitedly explained how, even at the age of 24, Malle had somehow managed to capture Jeanne Moreau’s beauty, the grit of shadowy Parisian streets and heart-palpating suspense, all while incorporating an iconic score created on the spot by a jazz giant.

Not missing a syllable of what I was saying, Osborne simultaneously furrowed his eyebrows at the TCM feed broadcasting live overhead on a monitor and gently corrected the on-air announcer who had just mispronounced the Oscar-winning director of “Reds” as Warren Beety. Osborne was quickly reassured that it was TCM’s Latin American feed and not TCM’s U.S. feed.

The details were important to Robert Osborne, a kid who had spent his childhood memorizing the film credits in his hometown movie theatre in Colfax, Washington. For a kid who would literally grow up to become the official historian of The Academy Awards, Turner Classic Movies was a dream job.

Reflecting on his TCM tenure, Osborne told me, “I hesitate to bring this up because I have to name the channel but before the launch of TCM in 1994, I used to work for The Movie Channel.” He shook his head at the memory. “Here was a network named The Movie Channel and to be perfectly honest, nobody there liked movies. Even the woman who ran the channel didn’t like them, never went to them and knew very little about them. She knew so little about them that at one point they showed her a promo for ‘An American in Paris’ with Gene Kelly and she said, ‘Well, I like it but shouldn’t we show the scene where he’s got the umbrella and he’s singing in the rain?’” Osborne laughed and added: “I remember thinking,

‘Wait a minute. Are you serious?’ So when Turner called and told me they were launching TCM and asked if I would consider coming over as a host, I jumped at the chance.”

Looking around the room filled with his fellow Turner Classic Movies co-workers prepping that afternoon’s shooting schedule, Osborne smiled and said, “It’s fun to show our viewers how passionate the people who work here are about movies and about this channel. It’s a real pleasure to be able to work at a place where people love these films as much as I do.”

In ‘Troubadour,’ Lex Liang Reimagines Nashville’s Glittering Beginnings— One Rhinestone At a Time Robert Osborne’s Intuitive Interviews: ‘He Never Forgot He Was One Of Us — A Movie Fan’