The instant she opens her front door as the insult slinging fruitcake chronicler Shirley Henderson Wednesday night in the premiere of Topher Payne’s “Broadcasting Christmas” on the Hallmark Channel, veteran Atlanta actress Susan Shalhoub Larkin mercilessly makes off with the movie.

And her co-stars Melissa Joan Hart and Dean Cain loved every minute of it.

As a successful Atlanta playwright for the past decade, Payne knew the scene needed an emotional monologue from Shirley to drive the third act of the TV movie home. Hallmark, however, had a few hesitations. The notes from the network read: “monologues in holiday TV movies don’t work.” The producers and director Peter Sullivan believed in the scene but as they neared the shooting date in September on set in Connecticut, they couldn’t find a New York actress who could nail it.

Explains Payne: “Basically, this person had to take command of this movie for three minutes, uninterrupted. It’s very common on stage but virtually unheard of in TV movies. We needed someone to do it so well that it neutralized all arguments against the monologue.”

After striking out in New York, the network initially ruled out seeing Atlanta talent when Payne lobbied for actresses from his hometown to be considered. That’s when Sullivan and Payne happened to have a conversation about their mutual love of the Atlanta-filmed Netflix phenomenon “Stranger Things.” Payne casually mentioned that one of the Atlanta actresses he would have suggested to play Shirley Henderson was Shalhoub Larkin, who portrays Sheriff’s office den mother Flo on the hit show.

Payne had been a fan of her work since 2013 when he met Shalhoub Larkin after her son Tony Larkin was cast in his play “Swell Party” at Georgia Ensemble Theatre: “I was a big admirer but we just hadn’t found the right project to work on together. What I love about Susan is she can do a whole lot with whatever you hand her.”

“Broadcasting Christmas” producers and Hallmark agreed. One videotaped audition later, Shalhoub Larkin was packing for Connecticut. “I come from a big family myself and Topher’s screenplay just nailed it,” Shalhoub Larkin told Eldredge ATL Wednesday during a break from brining her clan’s Thanksgiving turkey. “He writes for the actor’s voice but he also knows what the audience wants.”

The bow on top of Payne’s Christmas gift to her? Shalhoub Larkin gets to be really mean to Dean Cain’s meticulously coiffed, toothy news anchor. After all, what actor wouldn’t relish an opening line of “I already told the boy with the face that I don’t want to be on TV” after making Cain shovel your driveway?

On the day of her scene, Shalhoub Larkin (who for decades has acted on stage at the Alliance, Theatrical Outlet, Aurora and Stage Door Players as well as helping to co-found the city’s Center For Puppetry Arts. Trivia bonus points: She’s also the sister of “Monk” Emmy winner Tony Shalhoub) had her two and a half page monologue thoroughly memorized. She recalls: On a break, Dean Cain, who is the dearest fellow said to me, ‘I’d never be able to memorize that much material. I’m used to memorizing just short patches of dialogue. How did you do that?’” Shalhoub Larkin’s response to “Lois & Clark’s” Superman? Theatre training. 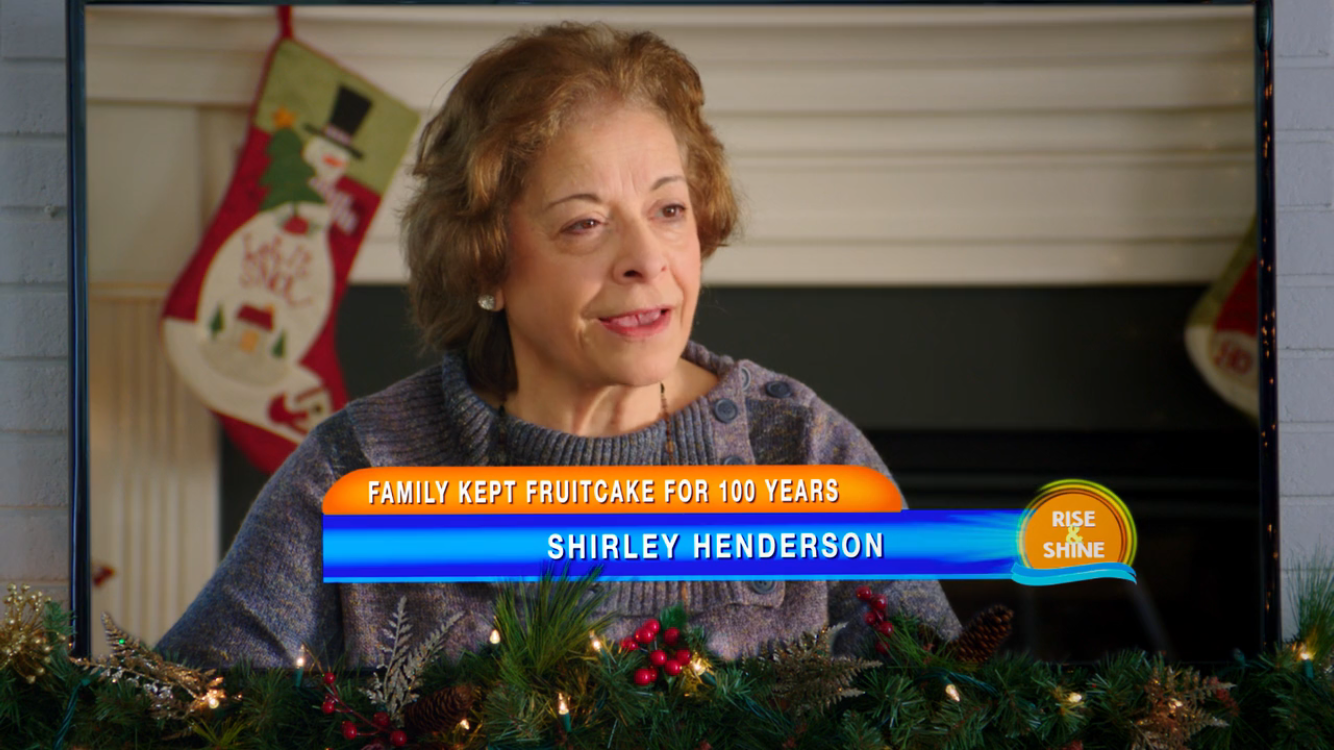 The actress says she only had one concern during the shoot. “I was representing Atlanta talent and there was a lot on the table. If I messed this up, it would have reflected poorly on Topher and it would have made the producers think, ‘Oh, we can’t hire actors from Atlanta.’ But I knew if I made this work, they’ll look at other people from our city. To me, that was even nicer than getting this juicy little role.”

After she wrapped her scene, the production team and Payne took her dinner. They told me, ‘We looked at actresses from New York but we couldn’t find anyone your age who hadn’t had a facelift.’ I just remember thinking, ‘Hallelujah!’” 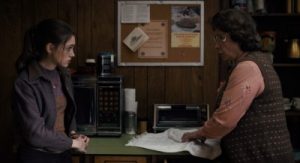 Shalhoub Larkin has an early holiday gift for “Stranger Things” fans, too. This week, she got fitted for her season two wardrobe as Flo. “Suddenly, millennials know who I am!” she says. “You’re definitely going to see more of Flo. She’s a tremendous gift. At my age, everything is a gift.”

“Broadcasting Christmas” with a screenplay by Topher Payne premieres tonight at 8 on the Hallmark Channel. It will encore on the network throughout the holiday season.