As Tammy Faye Bakker, Broadway Vet Kirsten Wyatt Steals The Show In “Born For This” 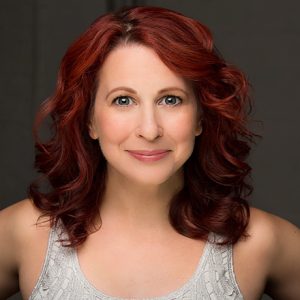 Thirty minutes before curtain on opening night of the world premiere musical “Born For This: The BeBe Winans Story,” director Charles Randolph-Wright knocked on Kirsten Wyatt’s Alliance Theatre dressing room door and matter-of-factly informed her, “Have a wonderful show and oh, Jim Bakker is here.” If you’re a Broadway vet who’s been in everything from “Annie” to “Elf,” this information shouldn’t faze you. Unless, of course, you’re portraying the televangelist’s now-deceased ex-wife Tammy Faye, in all her “PTL Club” 1980s excess, complete with Krystle Carrington shoulder pads and enough spackled on blue eye shadow that your face could be viewed from NASA’s international space station.

The Broadway-bound musical by BeBe Winans and Charles Randolph-Wright chronicles BeBe and CeCe Winans rise to fame as two of the best-selling gospel singers of the 20th century. As teens, the singing siblings were plucked from their family home in Detroit and ended up integrating the Bakker’s lily white Christian “Praise The Lord Club” TV empire in Pine Hill, North Carolina.

Recalls Wyatt: “I was on stage trying to concentrate and yet I couldn’t help thinking, ‘I wonder what Jim Bakker is thinking right now?! I wonder how this must feel for him to watch this?’ We never wanted the performance to be disrespectful or to make fun of Jim and Tammy. We wanted to remain truthful to who they were and what they meant to BeBe and CeCe.” It didn’t take long for Wyatt to find out what Bakker thought.

As the opening night audience members rose out of their seats to give the cast a standing ovation, Winans invited the man he considers a second father to the stage to say a few words. Bakker’s reminiscences of BeBe and CeCe’s formative years on PTL were so moving, in true Tammy Faye tradition, Wyatt cried her eyelashes off. As they posed for a cast photo with Bakker (who now has a Missouri-based TV ministry with current wife Lori), he turned to Wyatt and asked, Oh, where are your eyelashes? You’re not Tammy without your eyelashes!’ Remembers Wyatt: “It was a very funny moment. I took that as a sign that he enjoyed the show!”

In “Born For This,” an Alliance Theatre co-production with Washington D.C.’s Arena Stage (where it will run this summer from July 1 to August 28), Kirsten Wyatt achieves the impossible. She’s a heat-seeking scene-stealer who captures your attention whenever she walks on stage, not an easy thing to accomplish when you’re co-starring with Juan and Deborah Joy Winans, the talented nephew and niece of the musical’s lead characters. 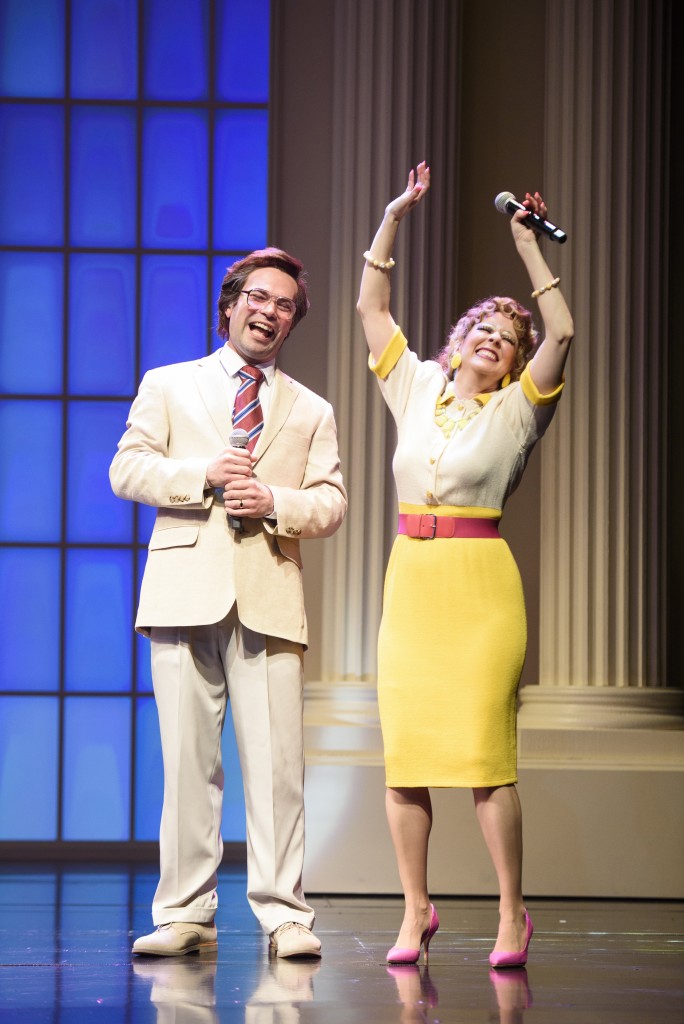 But under Charles Randolph-Wright and BeBe Winans’ careful guidance, Wyatt has created a heart-felt, bones-and-blood three-dimensional portrayal that not only captures all of Tammy Faye Bakker’s onscreen outrageousness but also the backstage flashes of anger in response to her husband’s extra-marital betrayals and the fierce mother figure who’s determined to protect the young people entrusted to her by Mom and Pop Winans. It’s a performance that is likely to resonate all the way to the Broadway if the show continues its creative momentum in Washington D.C. later this summer.
For Wyatt, an actress who has appeared in “Shrek,” “Grease” and “High Fidelity” on Broadway, her adventures as Tammy Faye began with a phone call in New York. She recalls: My agent called me at 4 in the afternoon and said ‘They can’t find a Tammy Faye Bakker. Can you go read for BeBe Winans at 6:30?’ So I watched a YouTube video, put on some eyelashes and went to the audition.” By 7 o’clock, she had the role. “Helping to creating an original role is my favorite part of our business. It’s what I like to do best. And BeBe and Charles are so open to ideas and so collaborative. The key was remembering that the Bakkers were like parents to these two young people, remembering that everything Tammy does is out of love for BeBe and CeCe. I realized I had an opportunity to humanize this person.”

The musical’s book gives Wyatt and her charismatic co-star Chaz Pofahl (who is downright spooky as Jim Bakker) ample opportunity to portray the Bakkers in all their fascinating layers, from prayer-pimping, amusement park building TV hucksters to surrogate parents off camera battling racist viewers who don’t want to watch an integrated “PTL Club.”

In one scene set in the Bakkers’ office, Wyatt as Tammy Faye snatches racist telephone messages out of a receptionist’s hand and angrily announces, “I’m going to call every one of these sons of bitches. Nobody messes with my colored children!”
Says Wyatt: That’s why I love this role. Not only was it a culture shock for BeBe and CeCe to move from Detroit to Pine Hill, North Carolina, but it was ground breaking to have two African American kids on Christian television in 1982. The Bakkers recognized and understood that and they protected them.” 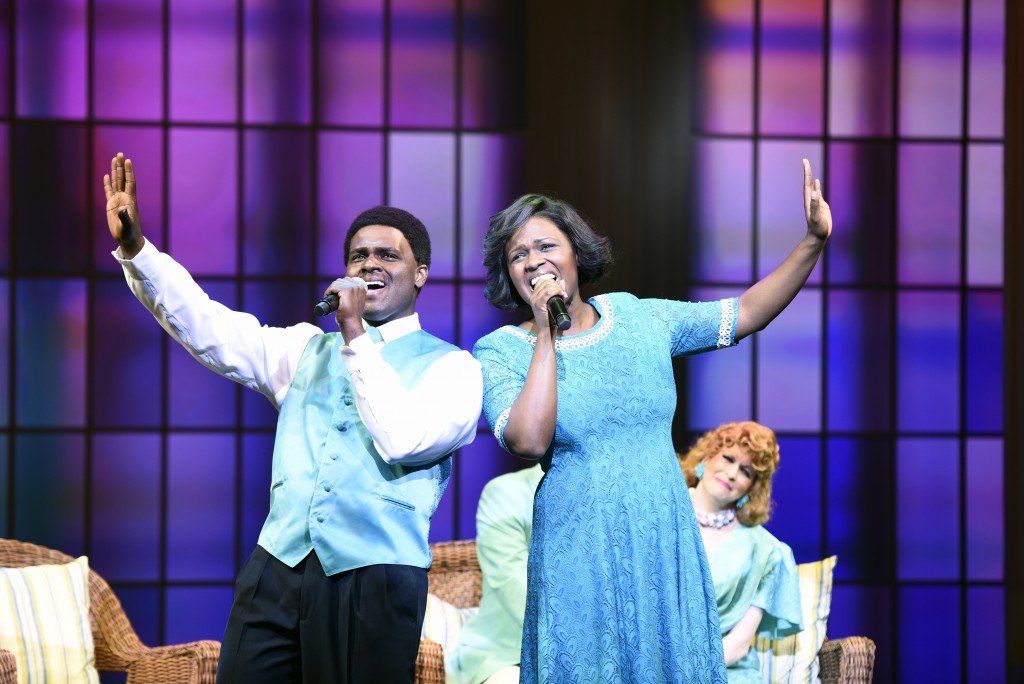 Another shock each night for “Born For This” audiences? Tammy Faye Bakker’s colorful off-screen vocabulary that’s first introduced in Act One when a piano lid accidentally slams on her fingers at the start of the musical number “Praise The Lord/I’m Confused.” Explains Wyatt: “The response is the same every night. The audience collectively gasps and then laughs and then laughs harder. Swearing is very natural for me. My dialogue in that scene is exactly what I would say in real life if my fingers ever got smashed in a piano lid!”

And then there’s Tammy Faye’s inimitable wardrobe by Tony-winning costume designer William Ivey Long. “During rehearsals, BeBe mentioned that Tammy always wore St. John,” recalls Wyatt. “So William and [associate costume designer] Brian Mear scoured the internet for vintage 1980s St. John. I must have tried on a million outfits. Tammy is on stage a lot so we thought it would be fun if every time she’s onstage, Tammy is wearing something new. Brian, William and I had such great fun playing with the clothes in the dressing room. During rehearsals, I would come down on my lunch break and say, ‘OK, what do you have for me to try on today?’”

While Tammy Faye’s wardrobe runs the retina-assaulting gamut from enormous belt buckles and aqua marine hued atrocities, Wyatt does have a few favorites. “I have to say, I really like the leopard outfit,” she dishes. “There’s also a pink jumpsuit. I mean, it’s the 1980s, of course, there are jumpsuits! There was a lot of salmon and coral with shoulder pads out to Timbuktu, ruffles and beading for days. It’s a perfect storm of gaudy and classy. Which I think was the line Tammy always toed.”

Duo eyelash glue, meanwhile, kept Tammy Faye’s most important wardrobe accessory from malfunctioning during most performances. “Any actress or drag queen worth their salt knows about Duo,” says Wyatt, laughing. It will get you through those tears but sometimes they’re just hanging on by a thread. I probably go through one pair of top lashes a week and two sets of bottom lashes. I’m trying not to blow the eyelash budget here!” To achieve the televangelist’s trademark make up, Wyatt keeps a chronological set of Tammy Faye photos on her dressing room wall. “Her make-up actually got heavier as her relationship with Jim began its deterioration,” she explains. “So more and more gets added throughout the show. For Tammy, make-up was her armor. I wanted to honor that. But on two show performance days, I totally understand why she had her make up permanently tattooed onto her face. It would be a lot easier!” 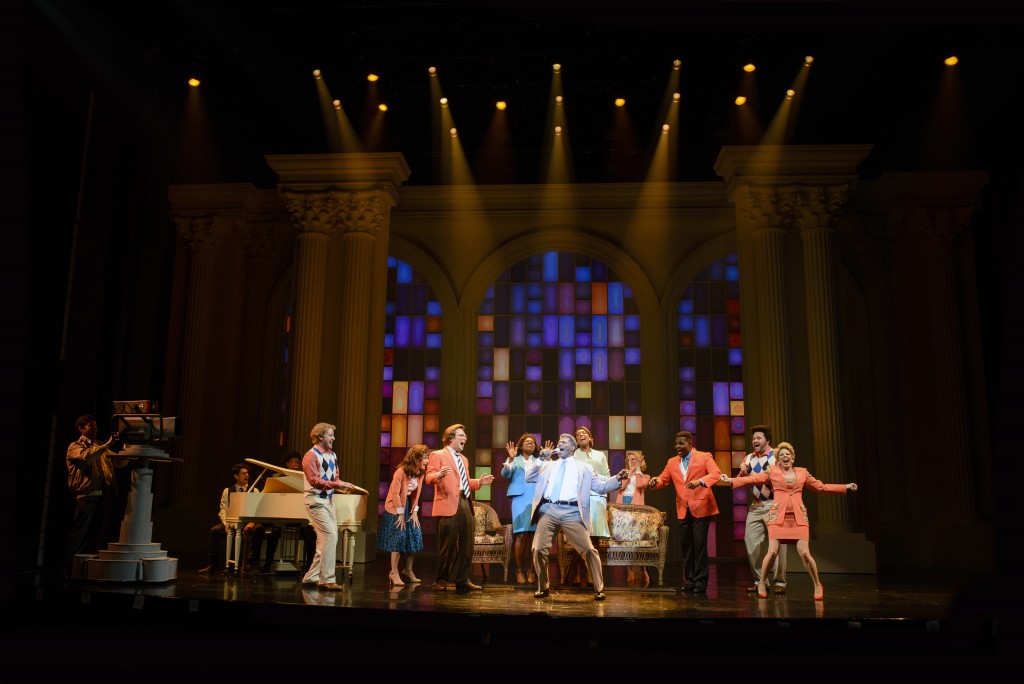 As the “Born For This” cast heads to Washington D.C. next month, Wyatt says she’s grateful to Atlanta audiences: “Doing a new piece like this, very rarely do you get this kind of incubation period where you can work on things and let things evolve. Thanks to Atlanta, we know what works, we know what to tweak. It’s such a huge benefit to be able to do a new show for three weeks. You figure out what’s consistent and what’s not. You get to see what’s grown, what’s sticking and what’s not. Atlanta has such a gift in that it gets to see new works like this so consistently. It’s a privilege to work in a city that appreciates that. We’ve had a wonderful run here and the entire cast is grateful to Atlanta for providing us with such a safe space to create new work.”

“Born For This” Alliance Theatre photographs by Greg Mooney