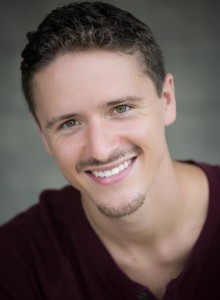 “Do you know they actually pay animals more than us?” wryly observes world-weary background actor Roland Sands in the pilot episode of the Atlanta produced dark comedy “64/8.” The line written by Edward Reid, one of the show’s co-creators and the actor who plays Roland, deftly demonstrates the funny, if eye-opening tone of TV pilot. Like their characters, Reid and co-creator Ryan Monolopolus have spent many an unglamorous hour toiling on Atlanta sets as extras making minimum wage (the show’s title stands for $64 over 8 hours, the industry income standard for background players). But unlike those actors toiling in obscurity, Monolopolus and Reid have created their own production companies, Monolopolus Productions and Vaslov Entertainment, respectively, to write, direct and produce their own independent projects in between acting, background and stunt work gigs.

Tonight, in a grand departure from their characters’ water and cheese ball existence on-set, “64/8’s” actors and crew will enjoy a glitzy red carpet premiere of the project at Atlanta’s Plaza Theatre in Midtown, including a Q&A with the filmmakers and cast, behind-the-scenes footage, an industry pre-party at the Righteous Room next door and an industry networking after party around the corner at Hand In Hand Pub.

“It’s a mildly autobiographical but definitely fictional narrative inspired by the lives of background actors working in Atlanta,” explains Monolopolus. “It’s about people who are trying to break into bigger things but they’re stuck being background actors and making minimum wage. It’s a way for Edward and myself to give a voice to these people. In a way, ‘64/8’ is a microcosm for the American dream. Everything you want is right in front of you but it’s still just out of reach.”

Reid is best known for writing and starring in “The Grand Prince of Moscow” while Monolopolus, a New York native produced the 2014 documentary feature “Recovery” and the short “Before Christmas” in between stunt work gigs on locally shot shows, including the CW series “The Originals.”

For Monolopolus and Reid, the objective of “64/8” was to focus on the smaller interactions that occur in a typical 12 to 14 hour workday spent in the extras holding area that’s just adjacent to set. There was also an opportunity to chronicle the weirdoes typically drawn to extras work, including “the creepers” (“these are the people who are usually 40-plus, who breathe over your shoulder and try and give everyone back rubs,” explains Monolopolus) and “the sleepers,” the extras who show up with a sleeping bag or a cot and sleep away the monotony. 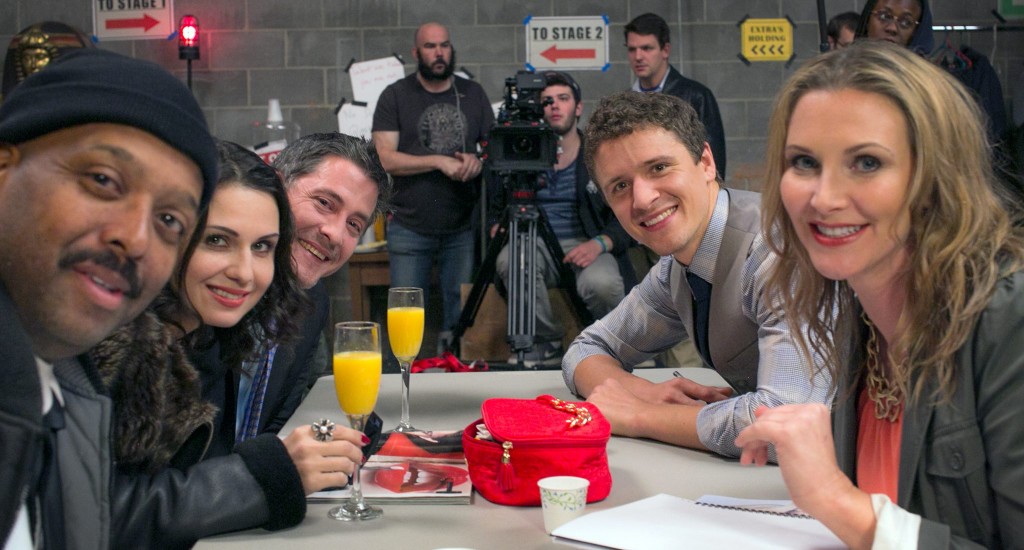 Reid’s Roland Sands character is a cynical veteran background actor who feels forever stuck while Monolopolus’ Kyle Krab is a fresh-faced newbie convinced his big break is just around the corner. The pilot was shot earlier this year inside Tucker’s All About Props where the prop storage facility was temporarily transformed into an extras holding area. Opening the pilot episode is director of photography Josh Saideman’s impressive Steadicam shot that introduces viewers to the extras holding area and its quirky inhabitants. The five-minute tracking shot begins with a burst through the backstage doors and captures all the behind the scenes action, or rather inaction. 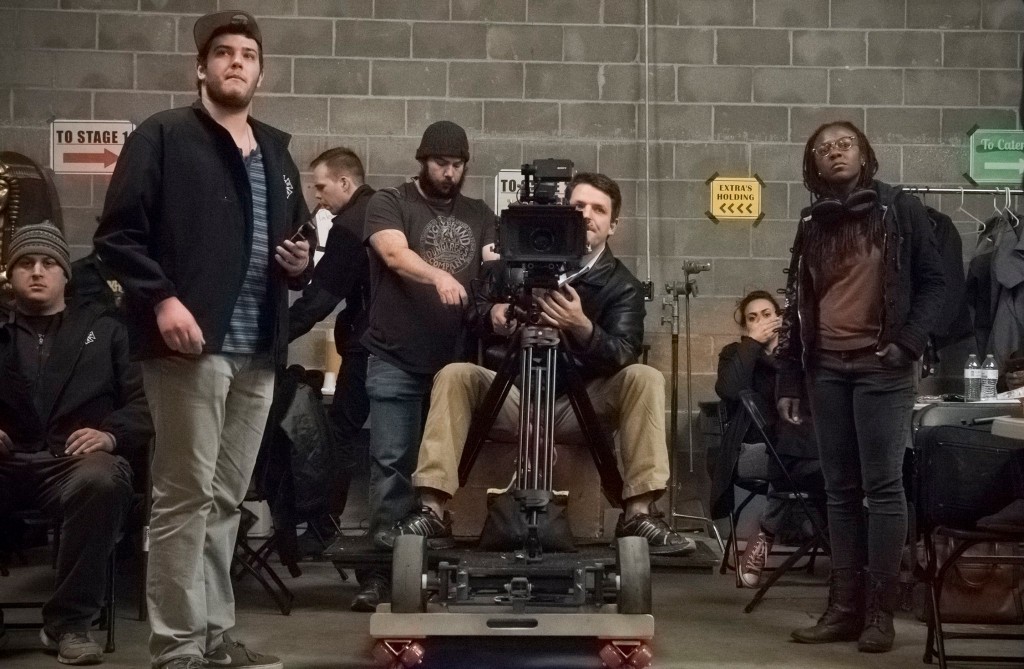 “Like ‘Clerks’ or ‘Waiting,’ this is an examination of people in low wage labor jobs and the various ways they handle things,” says Monolopolus. “This is a job where you’re supplied with maybe a jar of cheese balls for a 10 or 15 hour workday or maybe you’re not fed at all. The Screen Actors Guild actors who have lines don’t talk to you, the crew doesn’t talk to you or you’re talked down to. You’re basically treated like an idiot.” 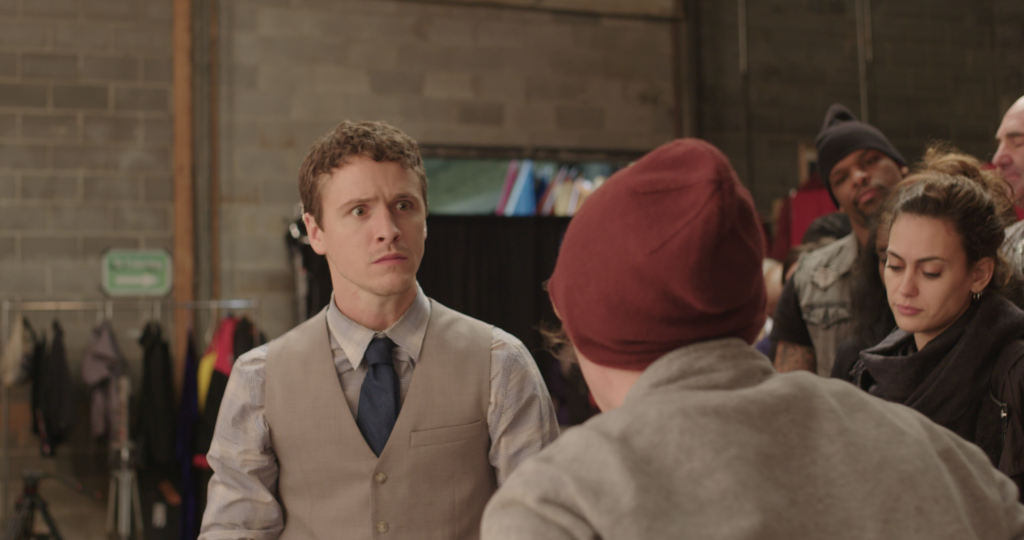 Aside from the ongoing assault on self-esteem and the sheer boredom of the hurry-up-and-wait nature of filmmaking, the chief villain in “64/8” has to be Eric the P.A., played with icky accuracy by Atlanta actor Josh Jordan. “We’ve seen this guy time and time again in real life on sets,” says Monolopolus, laughing. “The production assistant is an entry level job at the bottom of the totem pole. Often, the P.A.s are getting coffee, shining shoes, cutting lawns, basically doing whatever they’re told to do. But they’re also often allocated to take care of and manage background players. Eric is a guy who has a small amount of power and it goes completely to his head, a guy who fancies himself a god-like character.” 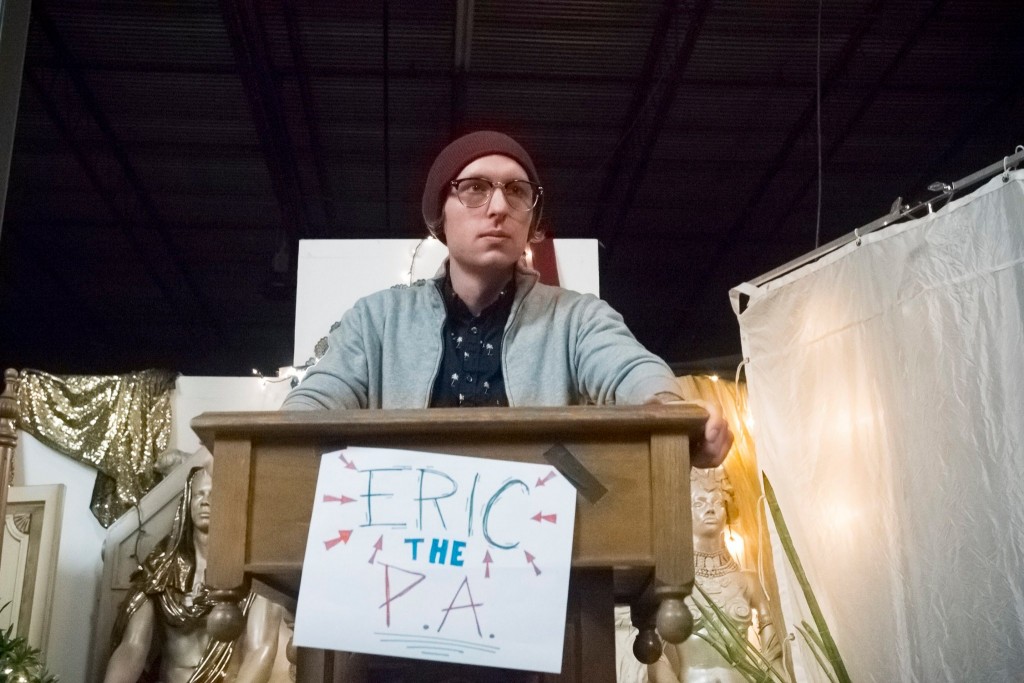 As Georgia’s film and television production industry continues to grow, Reid and Monolopolus hope to ink a deal to put “64/8” into production as a 30-minute episodic comedy series but they also hope to create a dialogue as the minimum wage continues its uptick nationwide. “I’ve always been interested in doing projects that have a reflective or social lenses,” Monolopolus explains. “Projects that speak about something in addition to being entertaining. Ultimately, we want to create a dialogue here about people who are minimum wage workers who are trying to get by and trying to make it.”

development in a future episode that’s currently on drawing board where background actors are required to don dog costumes and get on all fours. Says Monolopolus: “In reality, if you want to bring a dog onto a film set, you have to pay the dog and a dog wrangler a certain rate and depending on the animal, it could be quadruple to ten times what a background player makes hourly. With the current pay structure that’s in place, it’s actually cheaper to hire humans to play dogs!”

Whole World Theatre’s Improv In The Park Is Tonight. Please Don’t Yell Out “Herpes!” As Tammy Faye Bakker, Broadway Vet Kirsten Wyatt Steals The Show In “Born For This”