Terry Henry, Stephen Ruffin Deliver A Jolt Of Electricity In “Beyond Reasonable Doubt” 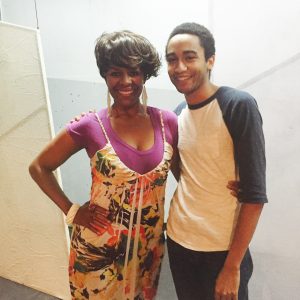 For most actors, bad reviews are an acute occupational hazard. Still, “Beyond Reasonable Doubt: The Troy Davis Project” actor Stephen Ruffin was momentarily stunned this week in the fiery closing moments of his act with co-star Terry Henry when a Spelman student sitting inches away in the front row disgustedly told him, “Just get off the stage!”

“She couldn’t take it, she couldn’t even look at me,” Ruffin recalls, still shaken, a few hours later sitting on the Synchronicity Theatre stage with Henry. The actors are relaxing on the living room set they share in Act II of the thought-provoking and sometimes incendiary world premiere by playwright Lee Nowell.

Running through Sunday, “Beyond Reasonable Doubt” is hardwired to spark debate and prompt conversations with audiences and the play’s acting ensemble alike as the drama examines all angles of the still controversial Troy Davis case. Depending on which performance you catch, the play’s two acts alternate to offer a different vantage point, fresh characters and an alternative lens with which to view the case. A talk back with the audience and the cast follows each performance.

In 1991, as Georgians will recall, Davis was convicted of the 1989 murder of Savannah police officer Mark MacPhail. Seven of the nine witnesses who testified to seeing Davis kill MacPhail later recanted their testimony in a case that went all the way to the U.S. Supreme Court. Davis was executed on September 21, 2011.

As a kid attending Chamblee High School, Ruffin followed the Troy Davis case while Henry, perhaps best known to Atlanta audiences for acting opposite Pauletta Washington in “Crowns” at the Southwest Arts Center, followed the case on CNN.
In the final moments of “Beyond Reasonable Doubt,” the script calls for a fiery exchange between Ruffin and Henry. While their characters are fictitious, each is deeply rooted in real-life Atlanta. As Curtis, Ruffin plays a Westminster private school kid now attending Morehouse College, whose father has been murdered. Curtis joins a protest rally to support the family of Mark MacPhail. Henry plays Mary, his firecracker of a grandma, a woman who proudly marched with MLK in Selma and who believes the black life of Troy Davis matters. 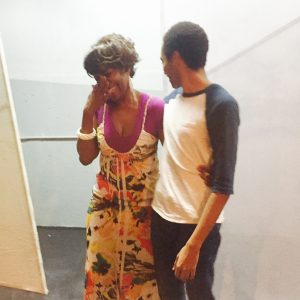 what attracted me to the play. This is a show with impact. Sometimes, during the talk back, I like to throw a jagged edge into the conversation, something wild in order to open up the airways a bit. We have a diverse cast and a diverse audience and I love these conversations. Everyone is so scared to talk about this, but we must speak to one another. Otherwise, this doesn’t serve a purpose and there is a lot of purpose, there’s a lot of validity in this play. But we have to talk to each other.”

Related  Q&A With "Tell Me My Dream" Playwright Pearl Cleage

For Ruffin, seen most recently playing the male lead in Atlanta Shakespeare Company’s “Romeo and Juliet” and the world premiere of Pearl Cleage’s “Tell Me My Dream” at the Alliance Theatre, embracing the character of Curtis was a process. “My character and I have very different opinions about the Troy Davis case,” he explains. “It was a little jarring to say his lines in the cold read at my audition. It’s hard being a black male and saying those words, especially when you see my character for the first time on stage, he’s wearing a Morehouse hoodie. I wanted to stay for the talk back last night just so that row of Spelman, Morehouse and Clark Atlanta students didn’t leave and hate me, Stephen, for the rest of my life.” 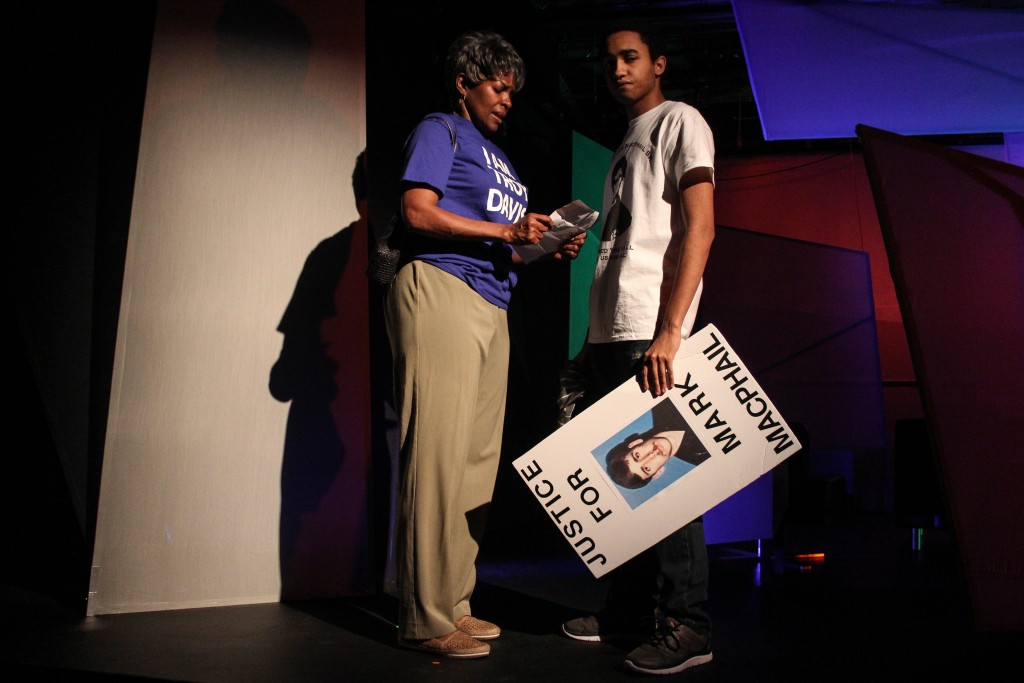 While she’s more in synch with Mary’s societal ideologies, Henry, the mother of a 16-year-old, had the challenge of playing someone’s grandmother. “But she’s a very hip grandma!” Henry says laughing and giving her co-star’s hand a playful squeeze. “I love Mary and I love her story. I’m also very familiar with a grandmother raising her grandchild. My grandmother raised me. There’s a lot of my grandmother in Mary. She was a godly Christian woman but she was as cool as a summer breeze. A lot of Mary’s nuances come from her.”

One of Henry’s favorite lines of dialogue wasn’t even in the script as the ensemble rehearsed “Beyond Reasonable Doubt,” but she immediately lobbied for it to be added. After her grandson dismissively informs her, “Racism is over, the world has changed,” Mary tells him, “Racism still exists. It just found better places to hide.”
It was a line that originally came out of playwright Lee Nowell’s mouth during rehearsal. Henry immediately shouted for the stage manager to write it down so it could be inserted into Mary’s dialogue. For Henry and Ruffin, it’s become one of their favorite moments in the play. 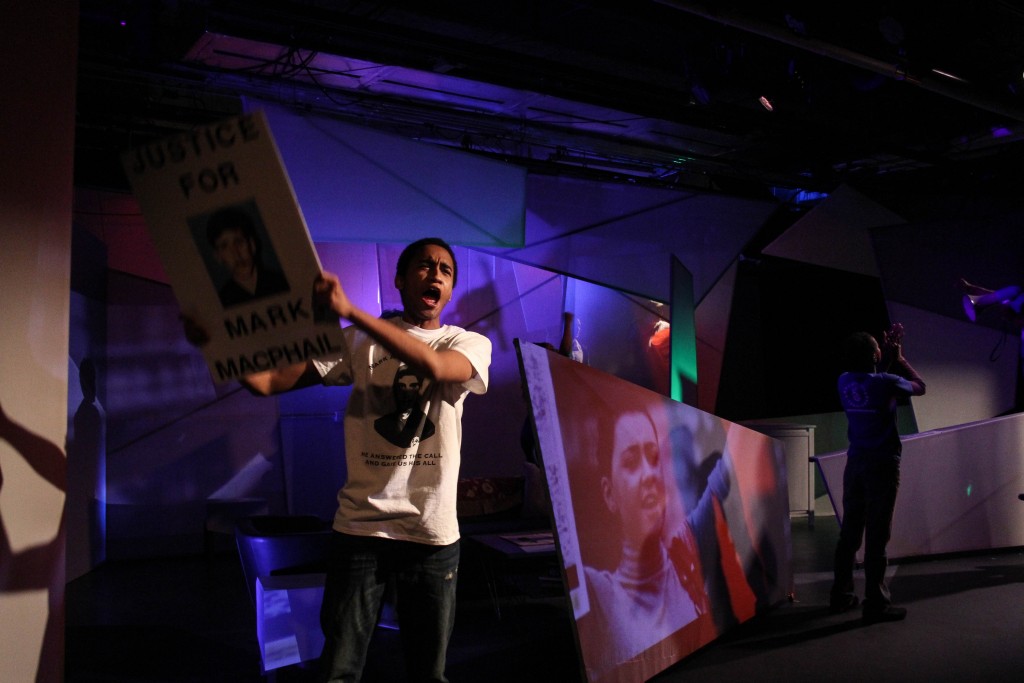 “The reaction is different every night,” says Ruffin. “You either hear an audible reaction or dead silence. Just … nothing.”
“It’s a complete punch to gut,” adds Henry, “because we’re holding up a mirror.”

When the world premiere run of “Beyond Reasonable Doubt” ends this Sunday at Synchronicity Theatre, the impact of the play will remain with both actors.
“My daughter has come to see this multiple times now,” says Henry. “She attends a suburban performing arts magnet school. Like Curtis, she’s immune to racism. She’s asking some pretty intense and mature questions now. I’m grateful to have this meaningful, necessary work on my resume.” 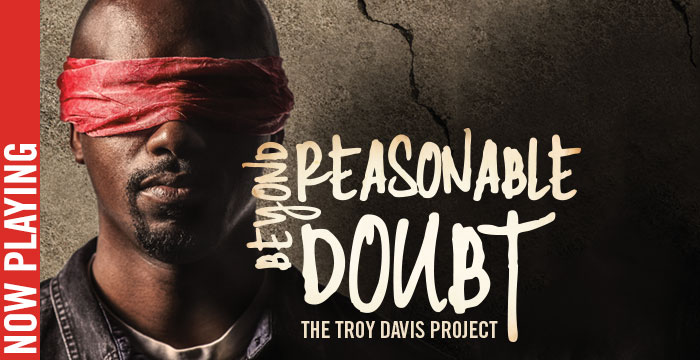 Adds Ruffin: “My generation likes to scream about social injustice. I’ve chosen a career where I play pretend. I always have to ask myself, ‘What am I doing to affect change?,’ especially when outwardly, I look like Trayvon Martin. A project like this is the obvious answer. It’s an honor to get to do work like this. It’s been a hell of an experience and an incredible gift.”

Beyond Reasonable Doubt: The Troy Davis Project” runs Friday and Saturday at 8 p.m. with a final performance Sunday at 5 p.m. For tickets, go to www.synchrotheatre.com/

This Might Be The Very Last Prince Concert Photo. Here’s The Amazing Story Behind It. Whole World Theatre’s Improv In The Park Is Tonight. Please Don’t Yell Out “Herpes!”