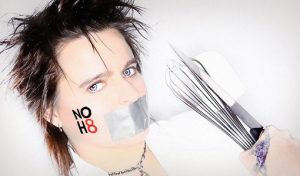 It’s a chilly winter’s night but at the end of Dutch Valley Road, warmth emanates inside chef-owner Calavino Donati’s new Madre + Mason restaurant. Just inside the door, a bartender is giving first-time customers a tutorial on the restaurant’s array of local small batch gins. In the back room, Charis Circle, the city’s feminist social justice nonprofit is hosting a benefit and a State of the Union Address viewing party. At tealight candle illuminated tables, diners are digging into Donati’s trademark turkey poblano meatloaf with jalapeno tequila gravy, mounds of buttermilk mashed potatoes topped with collards, grilled Brussels sprouts with sundried figs and a ridiculously addictive smoked gouda queso that should arrive at tables with its own 12-step program.

Donati’s wife, business owner-singer-songwriter Doria Roberts is busy coordinating food order tickets after working all day at the couple’s nearby Virginia-Highland business, Tipple + Rose Tea Parlor & Apothecary. Now freed up from her day at the pair’s third business, the recently relocated Urban Cannibals at 368 Fifth Street in Midtown, Donati pokes her head out of the kitchen window, hands off an order of pineapple jerk shrimp tacos and beams at Roberts.

Roberts knows that look only too well. It’s the same one she saw last year when the couple toured the then-empty restaurant space at 560 Dutch Valley Road in the Morningside/Lenox Park neighborhood adjacent to the Beltline and Donati saw the spacious kitchen for the first time.

“As soon as I saw the expression on her face I knew I wasn’t going to be able to say no, even if it meant opening three new businesses all in the same year,” reflected Doria Roberts, while giving an advance tour of the space last fall. With a newly created We Serve People, LLC serving as an umbrella for all three burgeoning businesses, Donati and Roberts are now a community-building, indie business triple threat in the city.

It’s an odyssey Donati began when she first opened her famed Roman Lily Café in 1997, one of the pioneering new wave of businesses in the city’s now red-hot Old Fourth Ward neighborhood. The 900-square-foot restaurant defied the odds to become a decade-long O4W staple.

“Everybody said I would fail,” recalls Donati. “On paper, it was a mistake. But it felt right. And because it felt right, I did it and we had two-hour waits for years. People would walk in and ask who our press agent was and I didn’t even know what one was! Atlanta media wrote about us and championed what we were doing. Social media didn’t exist. The Internet didn’t exist! It was all word of mouth. There was a body shop, a scrap metal yard, a lumberyard, a few burned down houses and us. I had regulars who lived in the warehouses up the street and they came in with ripped jeans and I had people drive up in Mercedes and walk in wearing fur coats. Nobody felt out of place. Whatever you could afford, whatever you were wearing, whatever your dietary needs were, no one felt left out.”

Taking a rare break in the middle of the afternoon, Donati sits at the bar in the now-quiet restaurant to reflect on her trailblazing two-decade dining career in Atlanta. Of her early successes at 668 Highland Avenue, the chef says: “In that discarded, sometimes dangerous neighborhood we managed to build community. Roman Lily really taught me … everything.”

Donati is silent for a second. As the tears come, she brushes them away from her cheek, smiles and adds: “I just wanted to create a space that was warm, welcoming and comfortable. And you know what? It happened. It happened because people discovered us and supported us.”

In 2007, even as Old Fourth Ward rents skyrocketed, the market crashed and Donati and Roberts, who were budding housing investors at the time, lost everything, including their own home. Recovering from bankruptcy, they found another gentrification gravity-defying neighborhood, East Atlanta village and opened Urban Cannibals Bodega + Bites with seven tables, furniture made out of old pallets, two hot pots and a George Foreman Grill. Fans flocked from across the city to share (and sometimes fight over) those seven tables, hungry for Donati’s sandwiches and brunch items, along with Roberts’ beloved biscuits and scones.

They moved out of the location in 2015 and last fall, relocated the Urban Cannibals concept to 368 Fifth Street in Midtown, just as Roberts readied Tipple + Rose Tea Parlor & Apothecary at 806 North Highland and Madre + Mason was being built out about a mile away.

The new restaurant’s name is a reference to Donati’s sometimes fiery, familial brand of Southern comfort food with a Latin accent. Madre, Spanish for “mother” is combined with Mason to reflect the restaurant’s American South geography and the glass vessel some Southerners use to serve iced tea. Or moonshine.

When Donati’s mother Rose, a lifelong auto enthusiast died a decade ago, Calavino got a license plate that read “Madre.” With Madre + Mason, Donati wanted to honor the woman ultimately responsible for her life’s work.

“I’m probably a cook because my mother wasn’t one,” she explains. “Growing up, she took us to restaurants every day. We became regulars at restaurants around town. We got to experiment. She never handed us the kids’ menu. She would say, ‘I’m having ostrich tonight. Would you like some too?’ Or ‘There’s a new Mongolian restaurant opening up. Want to try it?’ That’s how I learned about food. I was also the kid who couldn’t sit still. I would watch the waitresses and I would get up and help refill water glasses when they got busy. The bartenders let me make drinks with them. The waitresses let me help them wait tables and the cooks would let me into the kitchen.”

Now that she’s in a kitchen roughly 15 times the size of the old Urban Cannibals space in East Atlanta, Donati concedes that she still gets antsy, even with two six-burner stoves, a walk-in refrigerator and freezer and a salad prep area. For the first time in her culinary career, there’s a wall between her and her customers. “At Roman Lily and Urban Cannibals, I was out in the open and I had direct contact with our customers. I got to find out how your kids were, how your dog was. I studied faces for feedback on how to tweak things.”

Madre + Mason’s diners are a combination of old Roman Lily customers (who had been pleading with Donati on Facebook to find another full service kitchen where she could once again aptly show off her cheffing), Urban Cannibals faithful and new diners strolling in from the Beltline. In her roomy new dream kitchen, she’s learning to delegate more so she can pop out to greet customers as they take their first or final bite of her cumin lime buttermilk brined fried chicken.

“Doria jokes with me that I could use all that room back there to put in a chef’s table so I can hang out with the customers again,” the chef says conspiratorially. As a jangling cellphone informs her break time is over, Calavino Donati flashes a grin, hops off her stool and adds, “I just might do it, too. When you’ve lost everything and discovered how to cook with two hot pots and a George Foreman Grill, you learn how to be pretty resourceful. You also learn a lot about what’s important, what isn’t and just how strong you can be.”

Madre + Mason is open for dinner, drinks and bites Tuesday-Sunday 5:30 p.m. to 10 p.m. The restaurant is located at 560 Dutch Valley Road NE, 404-748-1498. The restaurant has free parking in its own dedicated lot and a dog-friendly patio overlooking the new beltline walkway.