The ensemble cast of playwright Topher Payne’s new comedy “Let Nothing You Dismay” can bypass the gym with a clear conscience all this month. The play which had its world premiere Friday night at Stage Door Players in Dunwoody, is a dizzyingly paced theatrical triathlon. Eight actors, playing 22 characters plus four hospital staffers, fly on and off stage and in and out of costumes for two hours and two-acts. It may be the world’s first cardio workout disguised as a piece of theatre. The only things zipping around the stage faster than the actors are the withering one-liners.

Set in a hospital waiting room at Christmas as young marrieds Allie and Kevin eagerly anticipate the birth of their first child via a surrogate, chaos ensues when both sides of the couple’s hilariously fractured family descend on them as a holiday surprise. For starters, there’s estranged hippie mom Charlotte, Red Lobster loving gramps Milford, story-spouting senior Mr. Yarmowich, a demented doula named Deb, Bubbie, a Jewish grandma with a death wish and Brianna, a cynical e-cigarette sucking author who may or may possess a homicidal stare.

At the height of the play’s chaos, Payne’s script even calls for Kevin’s age inappropriate stepmonster Kaitlyn to deliver an emotional monologue while simultaneously assembling a Sweet Beginnings baby basinet live on stage.

“The real challenge with this script is all the intersecting conversations, everybody

is moving all the time,” explains Eubanks. “Finding a cast that could handle the versatility and the characterizations was crucial. By the time we got to cast this, a lot of the city’s holiday shows have been cast and that sucked up a lot of talent.”

Says Eubanks: “I probably spent two weeks pre-blocking everything. The whole play is carefully choreographed with Topher’s rhythms in mind.” Adds Egizio: “We watched as the actors starting making discoveries and began clicking with each other. You saw that chemistry begin to formulate.”

“We didn’t really have a developmental process with this where you cast it months in advance and you go through and do a lot of rewrites with the script,” explains Eubanks. “This was more like jumping out of an airplane and yelling Geronimo!”

Eldredge ATL: Having just seen this, the logical opening question is this: How in the hell did you just pull that off?

Shelly McCook: My back went out so it’s really hard to change clothes in 14 seconds! (cast laughs). It’s crazy back there. We have people helping us out but we also help each other.

Doyle Reynolds: You’re asking yourself, “What’s next, what’s next?! Am I in the right costume? What’s my next line?!” You just see people in a blur back there in various stages of disrobing. 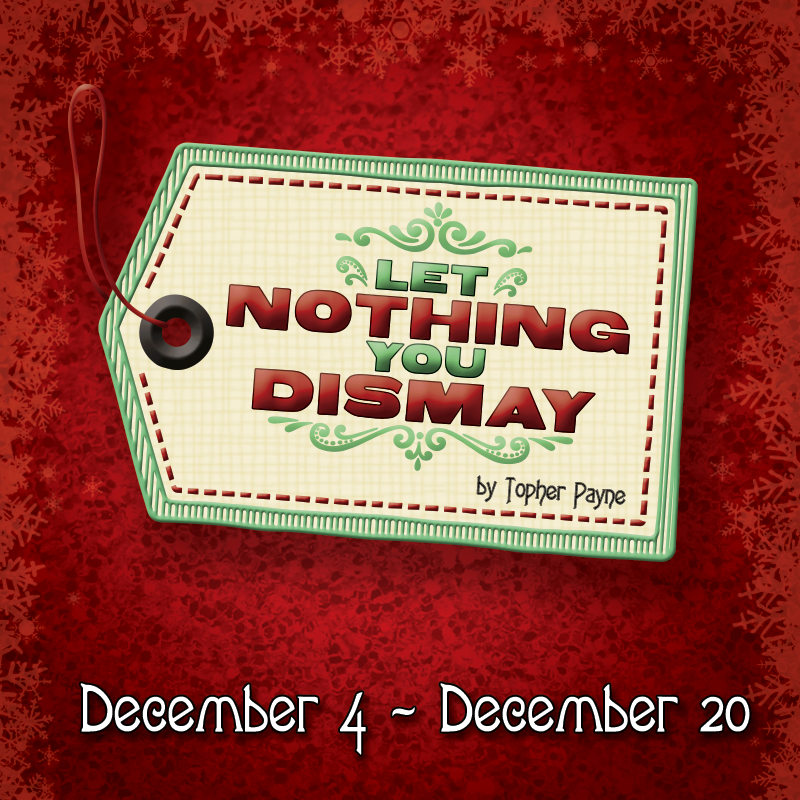 Emily Sams: It starts out back there so neat and organized. (everyone laughs) By the end of the second act…

Shelly McCook: It’s all just a big pile of hair and clothes.

Gina Rickicki: It looks like a drag queen rummage sale exploded. Which, technically, I feel very at home in (cast laughs) but still… it can be difficult to find your next look.

Mark Gray: For me, working with Bryan when he’s playing Jerry and I’m playing Dr. Tim, if I see him in his clothes, I know who I’m playing right now. But when you’re walking on by yourself, you always have to stop and ask, “Where are we in the play?!”

Amanda Cucher: Earlier this week in rehearsal, I came out dressed as one character and another character’s voice came out of my mouth. That was intensely weird.

Emily Sams: There are so many accents on stage at one time, if you’re not melding into one of your other character’s accents, you’re slipping into another actor’s.

Related  No Big Whoop! Bakery Is Becoming Kind Of A Big Deal

Eldredge ATL: Is it all a bit like being schizophrenic?

Amanda Cucher: That’s what my doctor tells me. (cast laughs).

Doyle Reynolds: I’ve found myself in Publix looking at cereal boxes and running lines before I realize people are around me. (cast laughs). The other shoppers are pulling their kids away from me.

Eldredge ATL: How have you all mastered the costume changes?

Amanda Cucher: I’m going to defer to someone who’s actually mastered it.

Shelly McCook: We’re all still trying to figure it out.

Gina Rickicki: One of the things that really helps me is to set up my station properly. The skirt I’m wearing as one character is pooled over the character’s shoes. There’s this tornado of throwing things off and pulling things on so it needs to be very methodical. It’s like choreographing a dance together with the people helping us get dressed. You practice it a couple of times and hopefully it all works.

Topher Payne: Our costume designer Jim Alford has created a lot of little tricks that are never seen on stage where something looks like a complete outfit when it’s done but it may not come on and off the way you would expect with normal clothing.

Eldredge ATL: So you don’t have to physically get dressed and undressed?

Eldredge ATL: At the risk of starting an argument, who has the quickest change in the show? (the cast laughs and points to Doyle Reynolds). How bitter are you, Doyle?

Doyle Reynolds: It keeps the adrenaline flowing for sure. You just want to make sure you can do it. If you’re not there when you’re supposed to be, the people on stage are the ones who suffer.

Shannon Eubanks: Or they get to try out their new stand up routine. (cast laughs).

Doyle Reynolds: Tonight when I peeled off the mustache, the tape stayed on my face and then it got stuck on my thumb and I couldn’t get buttoned. I have to transform from Ivan into Milford in about 30-45 seconds. As that point in the show, I’m pretty sweaty so things don’t come off as quickly.

Topher Payne: The changes get faster and faster as the show goes on.

Eldredge ATL: And when you discovered that about the rhythm of the show, who wanted to back over Topher Payne with their car?

Amanda Cucher: This is not the first time he’s done this to me.

Gina Rickicki: We love Topher. You’re getting to create magic. If you do this well, you can flip an audience out.

Eldredge ATL: This is a completely unfair question so that’s why I’ll ask it: Who’s your favorite character to play?

Mark Gray: Mr. Yarmowich. He’s got such a great story and it’s structured so

well. It doesn’t matter that he’s told it a million times, once he starts it, he can’t stop. (cast laughs).

Gina Rickicki: I like Tawny. The challenge of trying to speak with a frozen mouth has been really fun.

Eldredge ATL: How did you perfect that?

Gina Rickicki: I had a very lonely childhood (cast laughs). I owned a ventriloquist doll. It was cheap and really scary looking and I practiced a lot. For once, a weird thing from my childhood has actually paid off! But she’s amazing. Topher wrote this character whose face is frozen into a horrifying grin but she still speaks with an accent. As an actor, that’s like eating cheesecake! (cast laughs). OK, I’ll try it.

Eldredge ATL: Shelly, your characters get steadily more insane as the play clips along. Who’s your favorite?

Shelly McCook: Probably Charlotte. I love her outfit, she’s got a wonderful flow and all these great friends and she’s got a great speech. But Bubbie is also really great because I get to kiss Doyle. I fall in love with him again each time we do a show together.

Doyle Reynolds: The first show I ever did in Atlanta 20 years ago was with Shelly.

Shelly McCook: I also teach and Emily was a student of mine at Marietta High School when she was 15.

Eldredge ATL: This is vastly different from being on stage playing the same character for two hours. How has doing quick-change comedy bonded you all as a cast?

Shelly McCook: Your vanity just goes out the window. Especially, when you’re back there in your underwear and you’re putting on these hilariously ugly costumes and you’re laughing and everyone is sweaty and smelly. (cast laughs).

Doyle Reynolds: There’s a lot of trust that gets built.

Eldredge ATL: Atlanta loves a good holiday theatrical tradition. If this thing is a big fat hit, how enthusiastic would you all be to come back and revisit this material?

Shelly McCook: From your mouth to God’s ears.

Doyle Reynolds: It’s blast to perform and everyone has his or her fun moment. To get to watch them doing it is a real joy.

Ben Silver: Although if we wait a year, Doyle might age out of being able to play Milford! (cast laughs)

Gina Rickicki: You know, you don’t say much, kid but when you do… (cast laughs).

Doyle Reynolds: I might be too young to play the orderly!

Eldredge ATL: Chances are excellent that real families will come to see this together. Playing these crazy relatives, what are your thoughts about audience members deep in denial who will perhaps recognize themselves on stage?

Amanda Cucher: I’ve already had this moment playing Angela when I realized, “Oh my God, this is so something my sister would say.” (cast laughs). And my grandmother is like Bubbie. She’s like, “Why am I not dead?!” (cast laughs).

Mark Gray: Everyone is bound to identify with at least one character, if not more.

Eldredge ATL: Unlike a lot of Atlanta holiday stage productions, this feels very of the moment culturally. Have you considered what it’ll be like playing this very modern, very effed up family but ultimately delivering this very sweet message to audiences?

Topher Payne: All their choices come from love.

Emily Sams: That’s what makes it so relatable.

Topher Payne: I don’t think there were that many, even back then!

Gina Rickicki: I’m excited that maybe this play will attract younger people or even older people who might be estranged from their families and they can come and have a relatable family holiday experience. It’s something that’s not just a ghost rattling a chain. This is more like, “That woman clearly has an alcohol problem, just like mom!” (cast laughs). I’m hoping this play brings everyone out.

Eldredge ATL: I want to give the final word to your director and your playwright. Has it been fun to collaborate with this talented acting ensemble?

Topher Payne: I’m such a theater fan. I’ve worked on stage with Amanda and Shelly before. I’ve just been itching to work with everyone else. To be able to write words for these people, when you get toys like this to play with (cast laughs), it inspires you to do your best work and that becomes contagious. It’s a joyful experience.

Shannon Eubanks: We were talking earlier about the odds of getting a cast like this together and then all of you walked in. This cast is my Christmas gift.

Scrooge Squared! A Conversation with “A Christmas Carol” actors David de Vries and Chris Kayser This Might Just Be The Best “Star Wars” Movie Since 1977. No Kidding.