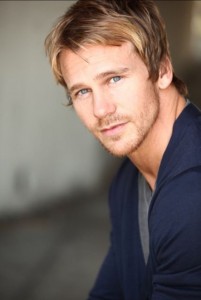 There’s a moment about 20 minutes into the new action thriller “Unsullied” that forces you to recalibrate everything you’ve just seen. A moment when a light switch is flipped. It’s lead actor Rusty Joiner’s favorite scene in the dark drama.

“To be able to really dig into a character that is shockingly the opposite of the way you grew up is enormous fun,” the Shiloh High School graduate explains. “Essentially, you’re playing two characters in one movie and you’ve got to make it convincing throughout. Here’s this good ole boy, this rich white-collar business guy from the south who’s loved by everybody. And then, we turn everything upside down in a split second. Who wouldn’t want to play that?”

And Joiner (who is perhaps most recognized by moviegoers for his role as Blade in Ben Stiller and Vince Vaughn’s 2004 comedy “Dodgeball”) loved every minute of the intense shoot. He didn’t even blink when he discovered this was Rice’s first feature as director. “I’m a huge sports fan and I’ve followed Simeon’s career so I was really excited,” Joiner explains. When you work with Simeon, there’s such a respectful space for everybody in the room. It’s just a bunch of artists working together. He went to film school but it isn’t until you’re on set that your real education happens. It comes down to the people you’ve hired and the trust you place in them. Everyday he grew as a director while as the screenwriter, he had such a deep knowledge of the writing. He kept us completely connected to the truth throughout.”

The physicality of playing Noah Evans, the businessman turned extreme hunter provided Joiner with a constant adrenaline rush during the shoot in the baking Florida sun. “I’m an ex-athlete so I always have that imaginary football coach in my face,” Joiner explains. “My goal in life is always to be the first one up and the last one standing. Anything I do, I’m going to commit to fully. I want to be the last guy to stop and take a break. In ‘Unsullied,’ when we get going, it doesn’t let up until the credits roll. As an actor, you can use all of that to your advantage.”

One scene certain to screw with the audience’s mental state features Joiner in a red apron hacking away at . . . something. “At that point, there’s a lot of question marks being thrown at the audience,” Joiner says laughing. “You don’t want to give them too much or too little. We needed an element of ‘What is going on now?! Is he making dinner? Is that for the dogs? Is that one of the victims?!’ Whatever is going on, it needed to be uncomfortable. We bought a giant rack of ribs and we had a great set dresser who put fake blood everywhere. I just went at it. Simeon said, ‘Play this like this is something you do every day.’ And then the film’s chase starts in the middle of that mess. Everything completely unravels. But getting my hands dirty, working with those dogs and all that running around? It was fun, man. I’m not even gonna lie!”

On set, Joiner had a secret weapon for resuscitating his southern accent for the role too. “I still talk to my best friend Russell every day. He lives in Rockdale County. Half the time when we’re talking, I have to say, ‘Could you please speak English? I can’t understand anything you’re saying, you’re so country!’ Russell was basically my dialect coach!” 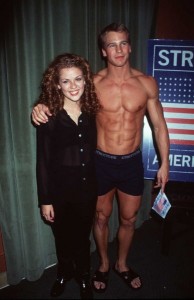 The role is a far cry from Joiner’s life as a cherubic cheerleader and gymnast who was discovered during a Structure underwear model search while attending Georgia Southern University in 1997. That led to a successful career modeling for Prada, Abercrombie and Fitch and a record 11 Men’s Health magazine covers.
After a move to Los Angeles, Joiner transitioned to an acting career in 1999. Now married, he’s eagerly awaiting the birth of his second child. On TV, he’s scored guest-starring roles on “Bones” and playing opposite Heather Locklear in the “Melrose Place” reboot. But it was his 2007 guest shot on TNT’s “The Closer” that really caused casting directors to sit up straight.

Joiner played Danny Jones, who turns out to be a serial killer who tortures his victims with a cattle prod. The climax of the episode features Kyra Sedgwick’s LAPD deputy chief Brenda Leigh Johnson coming aboard Jones’ boat alone to question the suspect. The script called for Joiner to brutally attack the beloved southern TV detective.

“That was such an epic moment for her character in that series because I’m the first guy she never got a confession from,” Joiner recalls. “They wanted something extremely violent. They were really pushing the boundaries for [basic cable] TV. They ended up cutting a lot from that scene because it was really intense.”

Making things even more intense for Joiner? Sedgwick’s real-life actor husband Kevin Bacon was on set since he was scheduled to direct the next episode of the crime series. “I went up to him at one point and said, ‘I’m so sorry I have to spit in your wife’s face,’” Joiner says. “He told me, ‘I’m an actor, too. No problem. Just go for it.’ He gave me the green light. Ultimately, it allowed me to become this really scary guy the scene called for. Kyra and I talked about it. She said, ‘Do whatever you need to do.’ She understood the impact needed to take her character to where the script was going next. I got to do all my own stunts so that was pretty awesome, too. When you’re in a room with an Emmy winner and actors the caliber of Kevin Bacon, that’s an actor’s dream come true.”

With two more films set for release this fall, the lead role in Philadelphia-set indie drama “Voiceless” and a supporting part in the upcoming comedy “Drive, She Said” with Jason Biggs and Ashley Tisdale, Joiner is working steadily these days. 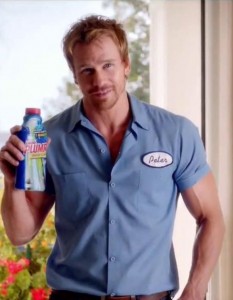 But with baby number two on the way, Joiner is grateful for another ongoing source of income: his residual checks from a 2013 Liquid Plumr TV commercial that still airs nonstop across the country. “I’ve done a lot of commercials over the years,” Joiner says laughing. “But this one was just so well received. It’s run longer than anything else in my entire career. It’s been phenomenal. It never fails, anywhere we go, anywhere we travel, I hear, ‘Excuse me, are you the seven-minute man?’ And I just smile, shake their hand and reply, Why, yes, yes, I am, ma’am!’”

“Unsullied” opens today at the Hollywood Regal Stadium 24 in Atlanta, Regal 22 in Austell, Stonecrest Mall 16 in Conyers, Town Center 16 in Kennesaw, Southlake Pavilion 24 in Morrow and the Tinseltown 17 in Fayetteville. For more info: unsulliedthefilm.com.