Look! Over There! In The Crosswalk! It’s Cabbagetown Man!! 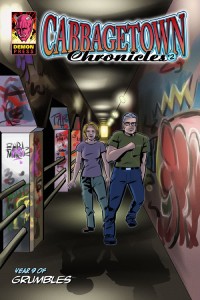 It’s late morning at the Carroll Street Café and Cabbagetown’s resident comics artist James Burns is crashed at a back table, scrolling through his iPhone Reminders list. The app is usually the first stop for inspiration for Burns’ 10-year-old weekly comic strip “Grumbles.” On this particular morning, the list of possible strip ideas includes: “Hipsters at Octane,” “Constant Back Pain No Fun But Things Will Get Worse,” “Rocking the Dad Bod” and “Pandas at the Zoo.”

“I’m 56 years old,” the artist and writer explains over coffee. “At this stage of life, some men chase younger women or buy a ridiculous car. I decided to start a comics career.” As the Savannah College of Art and Design adjunct professor readies issue number two of “Cabbagetown Chronicles,” a new collection of his “Grumbles” strips for DragonCon in downtown Atlanta Labor Day weekend where he’ll appear in the artist market, Burns had an opportunity to reflect on the strip he describes in the new issue as “basically me metaphorically shaking my fist at things that piss me off. I hope you enjoy that sort of thing.”

The 1981 Bachelor of Fine Arts University of Cincinnati graduate spent the bulk of his career creating graphics for television news until a detached retina threatened his eyesight and his visual artist career. During his extended recovery from surgery, Burns used his lifelong love of comic books as a therapeutic tool and began sketching and writing about his journey. The final result was his first full-color comic book, “Detached.”

“I had always wanted to do a comic but I never had a story,” Burns explains. “It was a pretty traumatic experience. I decided to use it to start a new career at 45.”

Now bitten by the radioactive comics bug, Burns had an idea for an ongoing strip. Carrying an armload of ideas detailing his left-leaning middle-age white guy problems, he met with Sunday Paper managing editor Conal Byrne and pitched him the idea for what would become “Grumbles.” Byrne bought the idea for $15 per strip and Grumbles ended up a mainstay in the alternative weekly until it folded in 2011.

“I liked to consider myself the lone liberal voice in a fairly conservative news weekly,” says Burns. “There were a lot of things ticking me off at the time. George W. Bush was president.” The strip veered into more observational, autobiographical territory when the artist and his wife, magazine editor and author Rebecca Burns moved into an historic Cabbagetown loft in 2012.

“Often, the ideas come just from Rebecca and me walking in the neighborhood,” he explains. “There’s less fist shaking now and more of a slice of life approach. A lot of the things I tackle in the strip just state the obvious. When people, particularly in the south, see an injustice, a lot of times they’ll look away and not say anything. There’s this faux Southern politeness that drives me crazy. A lot of times, people won’t speak out when there’s obvious injustice going on. What’s that saying, ‘All that evils needs to exist is for someone to say nothing?’” 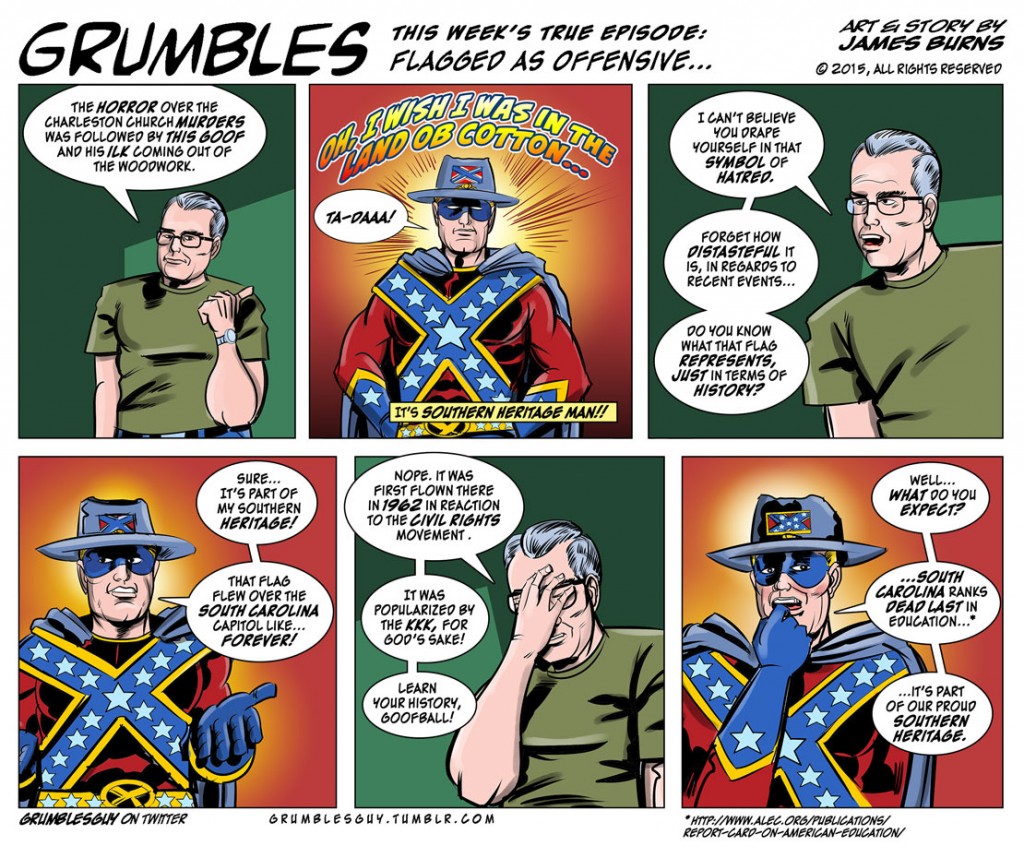 Among the topics Burns has weighed in on via “Grumbles” over the past year:

Burns also uses the strip (which now circulates on his Tumblr page and monthly in the Cabbagetown Neighbor newspaper) to call attention to hyper local issues in his neighborhood. Recently, he spotlighted how impenetrable the crosswalk at Boulevard and Gartrell Street can be — if you’re African-American. “Atlanta’s the city too busy to stop,” Burns theorizes. “Cars never slow down, even for mothers carrying children. It’s insane. I found out that if I walked out there and stared the cars down, they’d stop for me. It might be a white guy privilege thing. But it also might be because I’m six feet five and I’m stupid enough to stand in the middle of the road and stare down traffic.”

Since the “Grumbles” strip is largely autobiographical, the artist and his loved ones frequently make guest appearances in the panels. Burns says it’s a fun shorthand storytelling device. “The guy in the strip is kind of my id,” Burns explains. “But he’s 10 years younger and has more hair. He’ll go out and shake his fist at the world. I’m more mild-mannered. I still shout at people when I drive but my windows are up.” 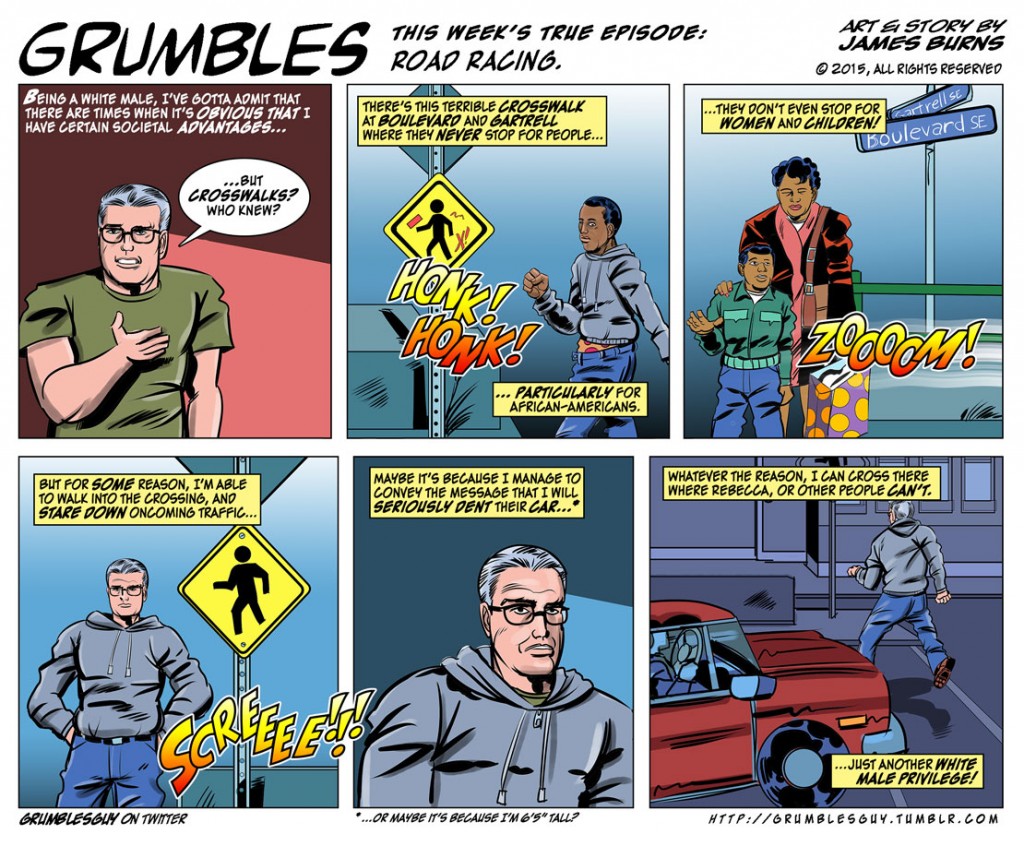 Burns’ wife Rebecca, who is now the editorial adviser at Red & Black independent student newspaper in Athens, has been a fixture in James’ work since “Detached.” She says she’s learned to live with her cameo appearances in “Grumbles” the same way her husband and daughter Brigid have adjusted to mentions in her magazine columns through the years. The family has a set rule — referenced individuals always maintain veto power. “I’d say that in the written version of our lives as depicted in my editorials, we all sounded a bit wittier and more pithy than in real life,” Rebecca explains. “In comic form in ‘Grumbles,’ I have a better bust-line and bouncier hair (not that I’m complaining…). The portrayal of me as a side-eye-giving skeptic is spot on.”

With his comic book secret identity now blown (“I usually tell my SCAD students a few classes in about my work. They usually find it amazing that their professor is actually on Tumblr…”) and “Grumbles” turning 10, the artist is figuring out what he might try next. One possibility is a graphic novel memoir about “growing up in the 1960s in a divorced family” or relocating the strip to Athens (The Classic City Chronicles?) where his wife now works. “I’m sure the hipsters living in a college town would give me plenty to shake my fist at,” says Burns. “My greatest fear is running out of ideas.”

Burns directs his gaze out the Carroll Street Café plate glass window just as a squadron of red helmeted tourists glide by on Segways. And in a flash, James Burns reaches into his utility belt and fires up his trusty iPhone Reminders app.

For more info on James Burns and his work, visit his official artist website.