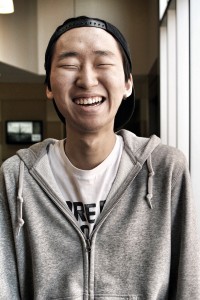 Atlanta photographer Alli Royce Soble was shooting the ambitious new #GTJoy social media campaign outside the Georgia Tech Student Center this spring, asking students to name three things that brought them joy when one of the responses stopped her in her tracks.

“This student just looked at me with this completely blank expression and said, ‘I don’t know,” Soble recalls. “The reaction on her face told me the question was completely alien to her. It broke my heart. I took a minute and stopped being a photographer and I said to her, ‘It shouldn’t be hard, should it?’ She said, ‘No, it shouldn’t.’ I replied, ‘That’s the entire reason we’re doing this campaign.’”

With the Centers for Disease Control reporting an uptick of campus suicides across the country each year since 2007, Soble sees #GTJoy as a proactive approach to strengthen a community in a sometimes isolating environment, especially for students accustomed to being the best and brightest.

The campaign is the brainchild of Madison Cario, the new director of The Office of the Arts at Georgia Tech. The idea is to get Tech’s students to pause for a moment in between the ongoing stresses of tests, grades and grueling research projects and take the time to ponder the question: “What Brings You Joy?”

Since her arrival in Atlanta in the summer of 2014, it’s something that Cario gets to experience daily from the professors and students who visit her office. “Because I work in the office of the arts, it allows people an opportunity to share that part of themselves,” Cario explains. “We have an indie band comprised entirely of faculty members from The School of Sciences. We have a dean who’s a stand up comedian and another who plays the Sousaphone. It’s a point of connection for people. At the root of all art is joy. I thought, why not extend this conversation to the entire campus?” 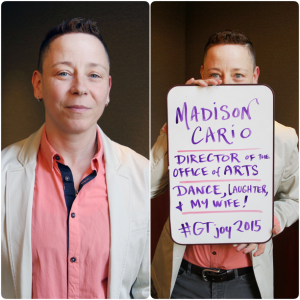 The first phase of the #GTJoy campaign consisted of portraits of students holding a small white board with their name, major, along with three words that bring joy to their lives. The campaign needed to go live on campus by Finals Week last spring, serving as a tool to combat end-of-the-semester stressors. Soble was asked to interview, shoot and edit 365 student portraits in fifteen days. The assignment proved challenging for the native Atlantan, a former Georgia State University arts major who had never before stepped foot onto the Tech campus. During her 50-hours per week spent on the project, Soble estimates that 20 out of every 100 students she interacted with stopped and agreed to participate in the photography project.

“There was a lot of ‘Pardon me, excuse me,’” Soble explains. “I felt like one of those women at the department store who tries to get you stop and sample perfume.”

Soble got a stereotype-smashing education too as she snapped the student portraits. “As Atlantans, when you hear the words ‘Georgia Tech,’ you immediately think two things: math whizzes and football,” she explains. “The reality is, the diversity of this school is inspiring. There are more women enrolled at Tech than most people realize. I met some serious punk rock kids with purple hair. The stakes are higher for the kids here. These young people are your typical high-achieving high school valedictorians. But what happens when that young person arrives at Tech, a campus filled with other high school valedictorians? Receiving your first B can be devastating. With this campaign, in a small reassuring way, we’re creating a support system for these students.”

When Tech rolled out the first phase of the campaign last spring on Facebook and Instagram, it instantly went viral with students sharing their portraits, making their new gratis professional headshot their profile photo, tagging their friends and commenting on the campaign. Posted student Samuel Clarke: “This may be the first uplifting use of a white board I’ve ever seen.” 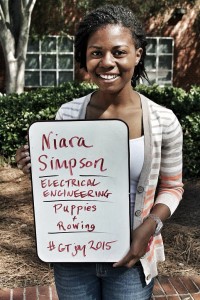 This fall, the #GTJoy campaign continues with Georgia Tech student photographers taking new portraits and Cario is hoping to find it in the budget to shoot a second professional campaign in the spring. Eventually, Cario says she’d like to see the campaign displayed for 55,000 screaming fans during Yellow Jackets football games at Bobby Dodd Stadium and projected onto buildings around campus. And she’s got her eye on a certain I-75/85 billboard just off the campus premises, too.

“Wouldn’t it be amazing to show off our students, real people with real dreams and real hearts to commuters on the highway?” Cario asks. “What brings you joy? Wouldn’t that be a great thing to contemplate when you’re all gnarled up, sitting in traffic?”

For Alli Soble, the Herculean task of completing the campaign in just two weeks was all worth it the moment she met Simeon Bruce, an International Affairs and Modern Language major who wrote “Jesus + Queer Community” on his white board. A few days later, Soble ran into Bruce on campus again. Remembering his name, she called out to him and asked if he’d like an advance peek at his portrait. 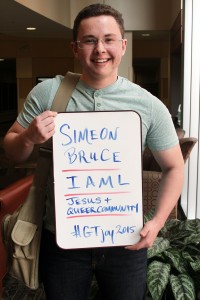 Just as he was about to sprint off to lunch, Simeon asked Soble a final question: “May I please give you a hug?”

“We stopped for a minute out of our lives and we made a connection and shared a little happiness and few smiles and a hug,” says Soble. “For me, Simeon is a beautiful representation of what this whole campaign embodies.”

Inside John Smoltz’s Private Baseball Hall of Fame Party Look! Over There! In The Crosswalk! It’s Cabbagetown Man!!