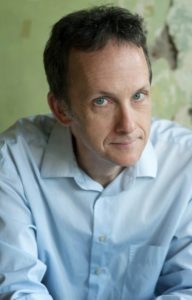 Peter McDade’s not-so-salacious past came back to haunt him last year in his Georgia State University classroom after he announced he was canceling Friday’s class. When his students inquired about the unexpected day off, instead of concocting a cover story, McDade opted to go with the truth — his old band Uncle Green was playing a reunion gig at The Earl to mark the 30th anniversary of the Atlanta rock quartet’s iconic “What An Experiment His Head Was” album. A few seconds later as he was prepping a PowerPoint presentation, McDade heard the album’s third track “I Don’t Wanna Know About It” coming out of one of his student’s phones.

“Thanks to Google, they found the songs, the old videos on YouTube and our old band photos,” McDade recalls laughing. “I found myself saying, ‘Yes, that’s me behind the drums with the long flowing hair. Now, can we please turn that off so we can discuss the Industrial Revolution?’”

In “The Weight of Sound,” the Atlanta writer’s excellent debut novel out today (Wampus Multimedia, $17.99), there’s a scene hilariously close to McDade’s classroom encounter. His bassist character Danny gets Googled by his high school students. Worse, the kids (themselves in a budding band dubiously named Time Capsule), find a used copy of his band Monkeyhole’s debut CD and purchase it on eBay for 99 cents (plus $3 for shipping).

Throughout the novel, McDade creatively weaves autobiographical details through 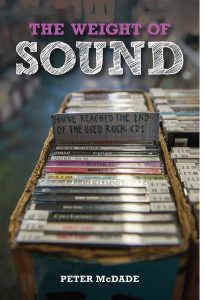 the prose (he’s also married and a father of two daughters, has experienced the perils of attempting to get paid from drunk, off the rails club owners and endured band field trips to strip clubs in the hopes the record label promotion guy can buy the radio station program director enough lap dances he’ll add your band’s current single to his heavy rotation playlist). But this isn’t the Uncle Green story.

Instead of conventionally tracking the novel’s rock trio Monkeyhole through the band’s 25-year career trajectory, McDade opts to follow the music, telling the story through a different perspective in each chapter. As a result, readers get to hang out inside the heads of Spider Webb, Monkeyhole’s lead singer, the drummer Paul, bassist Danny and also the fans, girlfriends, promotion guys and roadies. With each new chapter, the reader is dropped into a fresh vantage point and a new perspective.

Ultimately, “The Weight of Sound” achieves the impossible — it deftly captures the unbridled spirit of rock n roll and tames it between the covers of a book.

“Rather than following a single character I wanted to follow the music when it goes out there into the world,” explains McDade. “Not to get too geeky about it, but I wanted to consider what the effect of this music might be on the people you might never know if you were the guys in the band. It’s a very insular world. Aside from interacting with the people who show up at the shows, it’s all very limited. You’re never going to talk to everyone in that club or follow them home to learn how the music affects them. I wanted to see everyone’s perspective.”

And like Uncle Green’s critically acclaimed but commercially under-appreciated recording career in the 1980s and 90s, Monkeyhole’s story isn’t a stereotypical rise to stardom tale. It’s the story of every high school kid who has ever picked up an instrument and dreamed of becoming a part of something bigger.

The author, who co-founded Uncle Green with Matt Brown, Jeff Jensen and Bill Decker as teenagers growing up in Basking Ridge, N.J., nails what it feels like to be in band. The brotherhood, the bickering and ultimately, the musical bond that keeps everything together. Until it doesn’t anymore.

“The band dynamic will always remain,” says McDade. “And like any family, it can be screwed up and maybe power isn’t equally shared. But like most of us can’t imagine not being in our families, for any musician, this is something that you love doing with other people, people who found each other. It’s something unique that you’re creating together, something that you can’t find anywhere else in the world.”

In addition to his music career (he currently plays drums in Paul Melancon and the New Insecurities), writing has also been a creative outlet for McDade for more than 30 years. As Uncle Green toured the country in its relatively reliable Ford Econoline van, he penned six novels along the way, scribbled down in practice books. “Instead of acquiring a drug habit, I took up writing,” McDade cracks. “This was cheaper. Plus, I can’t really play the drums when I’m on some other substance. Writing was my only option.”

Five years ago, the Decatur-based writer decided to take a series of short stories about the music business and interlock them into what would become “The Weight of Sound’s” faux musical universe. On Saturday mornings, between teaching classes and co-parenting, McDade, MacBook in tow, would find a table at Kavarna coffee shop and write. 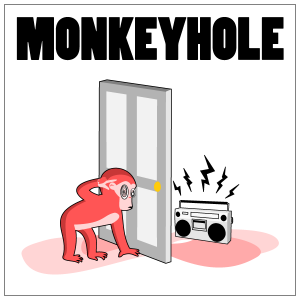 with a reading and signing at Kavarna. The author will also be pulling double duty behind the drum kit. The novel comes complete with a downloadable soundtrack, featuring new songs written for the project using McDade’s lyrics with music from a host of musical friends, including his former Uncle Green bandmates Matt Brown and Jeff Jensen, The Vidalias’ Charles Walston and Atlanta singer-songwriter Paul Melancon, who supplies the singing voice of Spider Webb for the soundtrack.

When longtime Atlanta music fans finally get their hands on “The Weight of Sound” Saturday night, the cover will likely look familiar. It was shot in the Used Rock CD rack at Wax n Facts, the venerable Little Five Points record shop run by Danny Beard, the guy who signed Uncle Green to his indie record label DB Recs 30 years ago. The shop is also featured in a sequence late in the novel as Monkeyhole bassist Danny confronts his past in the “Recent Arrivals” used compact disc section.

“Given Uncle Green’s history and relationship to DB, Wax n Facts had to be in the book,” says McDade. “To me, Wax n Facts represents something that is disappearing. It’s a place where you can go and touch and talk about music.”

Even in the age of unlimited music streaming and shrinking royalty checks, McDade manages to leave readers in a hopeful place in “The Weight of Sound’s” final chords. “There’s nothing more exciting for me than walking around the neighborhood and hearing a really bad band playing in someone’s garage,” says McDade. “To me, it represents the future. The music will keep going even after the old music business machinery has broken down. If you’re an optimist, you want to believe that creativity, that new music, will always find a way out into the world.”

Peter McDade will read from, sign, and help play selections from his debut novel “The Weight of Sound” Saturday, August 26 from 8 to 10 p.m. at Kavarna coffee shop at 707 E. Lake Drive in Decatur. For details: Go to the A Cappella Books author page or the book release Facebook event page.

After 55 Years, Hollywood Finally Gets the Webslinger Right With ‘Spider-Man: Homecoming’ How ‘The Weight of Sound’ Inspired Its Own Soundtrack