With A Little Help From Kanye, Aaron Strand Finds His Inner Macheath In “Threepenny Opera”

As anti-hero Macheath in Bertolt Brecht and Kurt Weill’s classic “Threepenny Opera,” Athens actor Aaron Strand swaggers his way through three acts and two and a half hours of the wickedly re-imagined 7 Stages production nightly. Between robberies, the unrepentant knife-welding bandit sleeps with half the cast, performs a hip-swiveling jailhouse soliloquy with an acoustic guitar, lets down his hair, loses his shirt and ends up being fitted for a noose.

But in rehearsals, Strand had trouble locating the much-loved louse — until he flipped on the radio.

“All you have to do is listen to Future or Kanye West, two artists that I like, by the way, to find that same kind of adolescent mindset,” says Stand with a laugh. “It’s that mentality of ‘[expletive] bitches, get money,’ that hyper-confident bravado that is exactly who Macheath is. He makes every unabashedly selfish, childish choice. There’s nothing mature or evolved about him. In modern hip-hop, those are qualities that are held up on a pedestal. I certainly went on my own journey to gain the confidence to play his guy. With every performance I’m still trying to figure him out.” 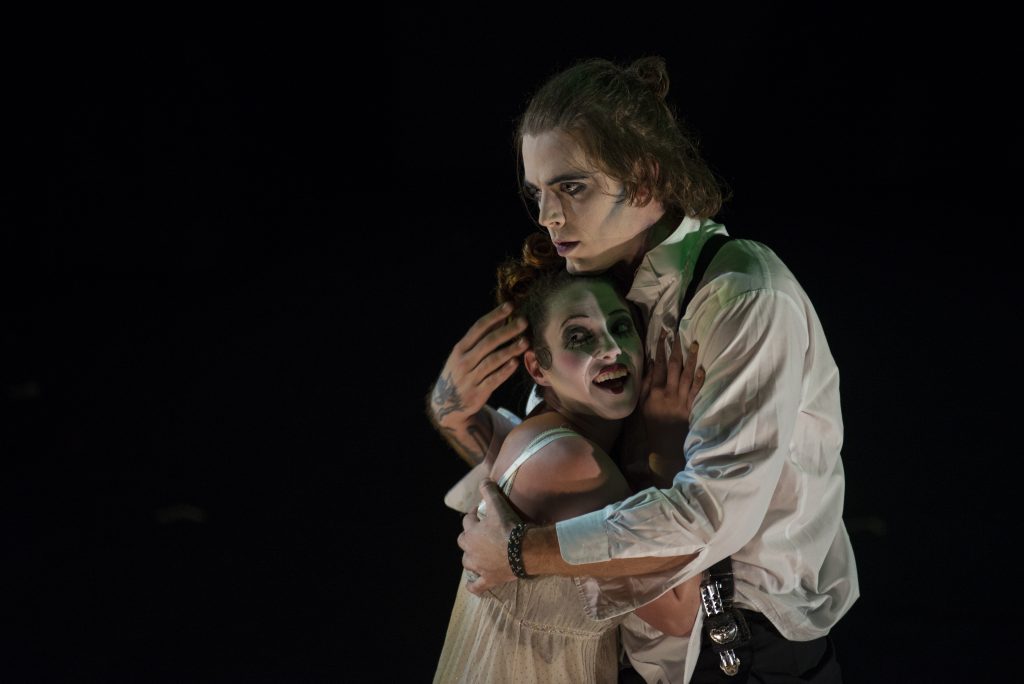 Thanks to enthusiastic audiences and backed by a standout cast of co-conspirators (including a steely, sexy knockout performance by Stephanie Lloyd as Polly Peachum), Strand has one more weekend to work on Macheath’s machinations, now that “Threepenny Opera” has been extended through Sunday at the Little Five Points theatre. With direction by Michael Haverty and Bryan Mercer and featuring live feed video, silent movies, a live band on stage and tongue-in-cheek animation, the play with music first produced in 1928 feels like a modern mash up of a nonsensical German Expressionist flick, a drunken midnight screening of “The Rocky Horror Picture Show” and an episode of “Monty Python’s Flying Circus.”

Strand, a New York University graduate who has appeared Off-Broadway in “The Man Who Ate Michael Rockefeller” and who is currently in post-production on his directorial debut feature film, “On The Edge of Normaltown,” says the opportunity to do Brecht on stage at an Atlanta theatre like 7 Stages was too good to turn down. 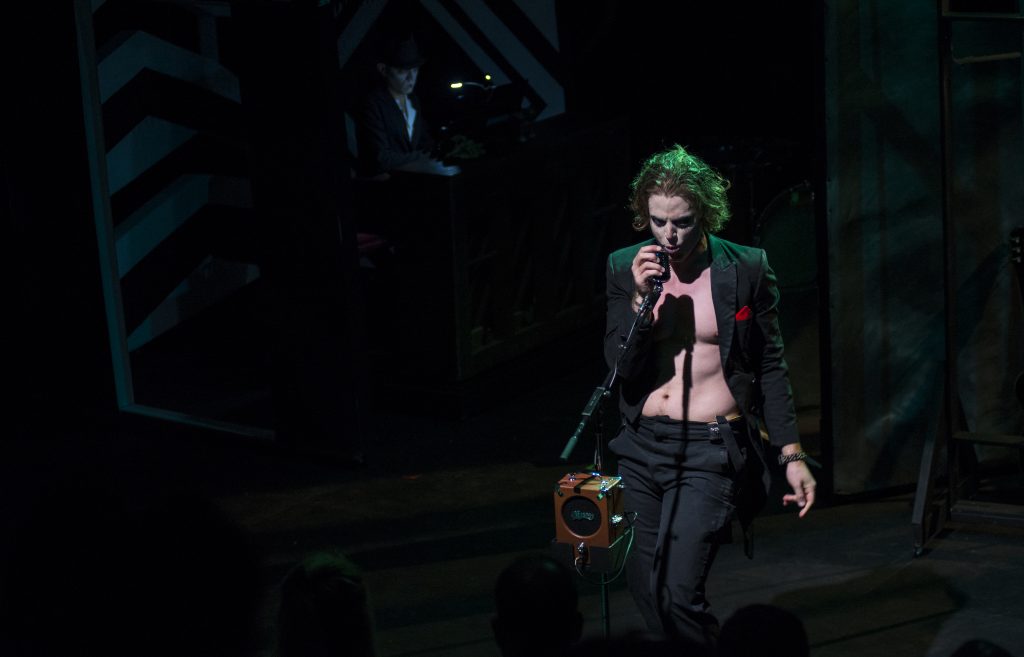 “I was really attracted to getting to work at 7 Stages with [co-artistic director] Michael [Haverty] and [artistic director] Heidi [S. Howard] and producing work that speaks to certain issues,” the 27-year-old actor explains. “So many places now are content to make theatre that doesn’t have anything to say. Theatre that’s safe. It disturbs me to no end. I’m not interested in productions where the audience just sits there politely, they watch the show, they clap and they leave. There’s no sense of danger there. There’s never a feeling in the audience like, ‘Oh, holy [expletive]! The wheels are [expletive] coming off the train!’ Without that sense of immediacy, there’s no reason to leave your house and go to the theatre. It’s important to feel something communally. Otherwise, I’d rather stay home and stream a movie.” 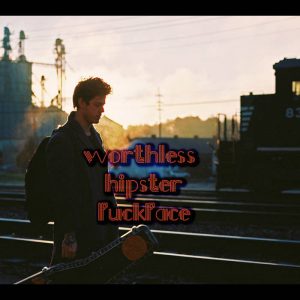 While in rehearsals for “Threepenny Opera” this summer, the Athens singer-songwriter dropped his 23-track solo debut album, “Worthless Hipster Fuckface” via Bandcamp. Still, he wasn’t sure about lending his guitar skills to Macheath’s Act Two jailhouse humble brag, “Ballad of the Easy Life” until directors Haverty and Mercer talked him into it. “I didn’t want it to be a shameless piece of showmanship,” says Strand. “But it’s about taking the audience into this egocentric world and you’ve got to get the audience on your side at that point because that’s the act where I’m treating everyone like garbage. Macheath believes he’s starring in his own [expletive-ed] up reality television show on E! On some level, it’s incredibly creepy that as an audience, you’re sort of attracted to this.” 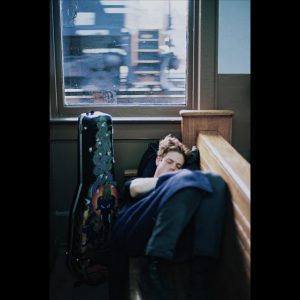 On the stripped down “Worthless Hipster Fuckface,” Strand fuses his life-long love of the blues with the witty absurdities of modern life. On the ode to oversharing “Facebook Blues,” Strand hilariously channels a guy whose ex-girlfriend informs him she’s pregnant via Facebook Messenger. “For me, it goes back to authenticity,” says Strand. “I can’t sing old timey blues songs about sharecropping. It’s not gonna work. Those artists lived a totally different life. I have to write from my own life, my own reality. It struck me as funny that in my white male hetero existence, the source of the blues is Facebook.” In a fashion, the song is a technological update of the Son House blues classic, “Death Letter Blues.” Explains Strand: “I can’t tell you have often I’ve found out friends have died through Facebook. What is today’s death letter? It’s your Facebook newsfeed and that resulting echo chamber that dictates your life.”

After turning in Macheath’s sheath in to the 7 Stages prop department for good Sunday night, Strand returns to Athens to finish “On The Edge Of Normaltown,” made with guidance from Los Angeles filmmaking mentor Dale Wheatley (perhaps most famous for having his improvised unreleased feature “Don’s Plum” starring Leonardo DiCaprio and Tobey Maguire banned by its stars).

Strand wants to have “On The Edge Of Normaltown” finished in time to submit to film festivals in 2017. He previews: “It’s about a disparate group of friends in Athens and it tackles the destructive aspects of masculinity.” Strand laughs and adds, “Are you sensing a theme with my work yet? Actually, it was a labor of love. It’s about following your bliss and hoping the universe will follow!”

For tickets to the remaining performances of “Threepenny Opera,” go to 7stages.org.

A Conversation With Country Legend Bill Anderson At Decatur Book Festival! The Mission: Shoot Photos Of Naked Women While Your Mom’s At Work. The Result: “My Moms House,” Evan Carter’s First Book