As Atlanta commuters slowly creep home through rush hour traffic outside, Heather Hayes, Dr. Yamma Brown and Keisha Jackson have gathered at the end of a busy day for some weekly girl talk. But unlike thousands of their contemporaries across the city, the daughters of James Brown, Isaac Hayes and Millie Jackson are catching up in front of microphones. The lively, often hilarious result is “Soul Sisters,” a weekly radio show broadcast each Thursday at 5 p.m. on Dash Radio’s Pure Soul Powered By Isaac Hayes. 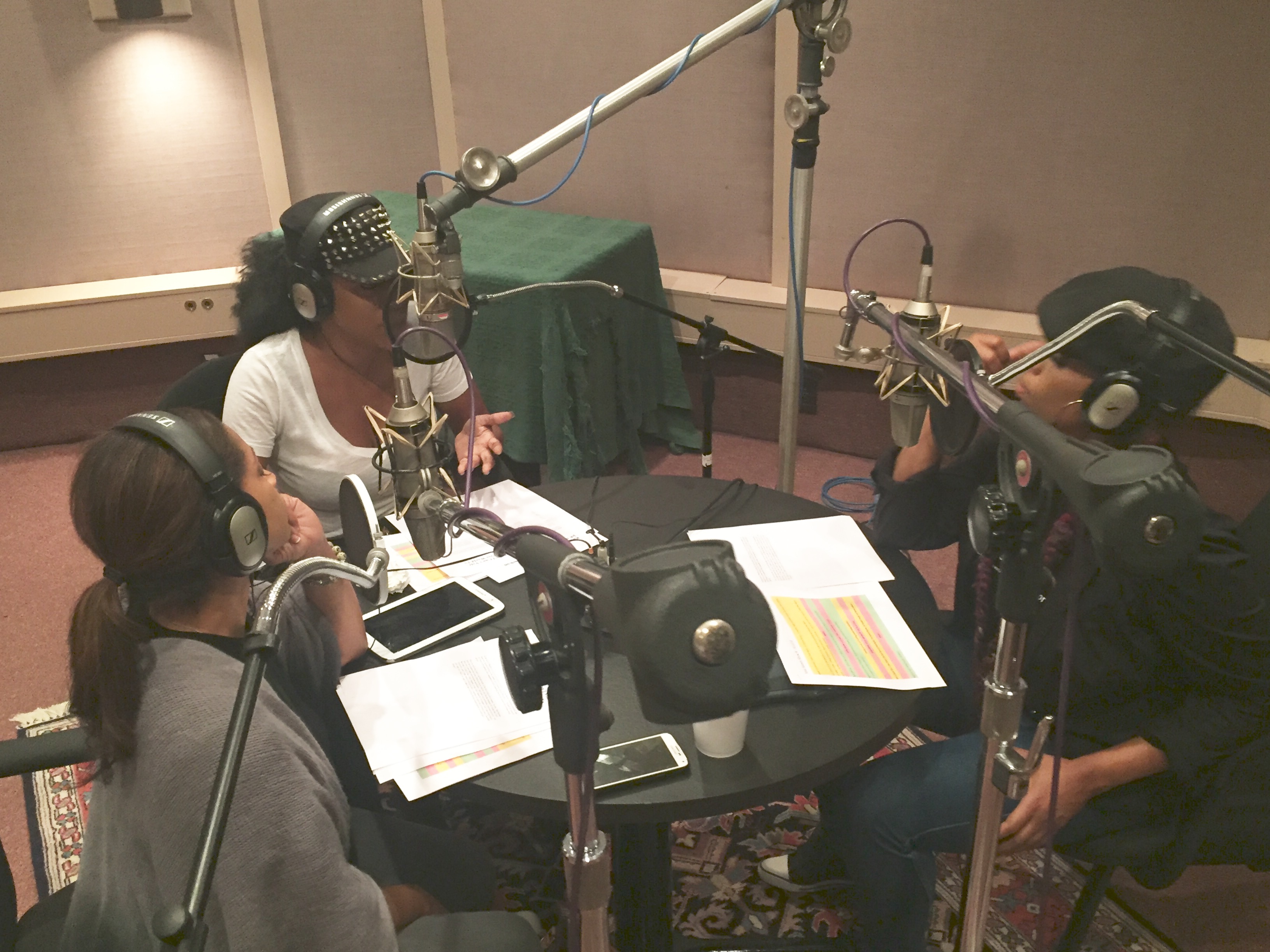 Heather’s brother, Atlanta producer Isaac Hayes III is in the adjacent studio overseeing the show. Brown, who by day works as a pharmacist, is deep into a conversation with Hayes and Jackson on the subject of eating disorders. As R&B singers themselves, Hayes and Jackson know first-hand the pressures of having to look stage and camera-ready at all times. Hayes is recalling a pivotal point in her career, working for Yamma’s father in his stage show as a back up singer and dancer in the 1990s. Another dancer had convinced Hayes to start taking Ripped Fuel with Ephedra. On a month-long break from the James Brown tour, she dropped 20 pounds and two dress sizes. 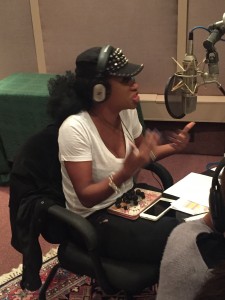 “As a dancer, you always knew when you had a video shoot coming up that the camera was going to add 20 pounds,” recalls Hayes. “So, the only thing I did for an entire month was work out like a fiend, eat two turkey burgers a day and take those pills. People started complimenting me on how I looked. It was almost like a high. The clothes kept getting looser and you kept getting that positive reinforcement.”

Looking over at Yamma, Hayes remembers: “When I got back on the tour, your father took one look at me and called me into his dressing room. I thought I was being fired. When Mr. Brown asked me if I was on drugs, that’s when it finally registered. It hit me that my cheeks were all sunken in and my head was this big lollipop on a stick body. I didn’t consider myself anorexic but it was real easy to slip into that behavior.” 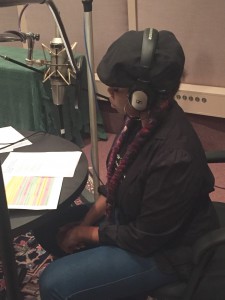 Jackson nods and remembers a college roommate who would assess how thin she was each morning standing in front of the mirror by seeing if her ribs were visible. “By the end of the semester she was gone from school,” Jackson says. “She was the popular girl everyone wanted to hang out with. About once a week I’d get a call. ‘She’s passed out in the library again’ or ‘She’s in the hospital.’ What was really frightening was that, after a while, this became the norm. I realized I could be sitting there, watching someone die.”

“The definition of anorexia is deliberate self-starvation with the intended goal of losing weight,’ Brown says. “I’ve definitely been there. Heather adds, “Me too.”

“But,” Jackson interjects, “there is this image of women that we’re being sold. That’s what we’re told we need to look like. And it’s only getting progressively worse.” 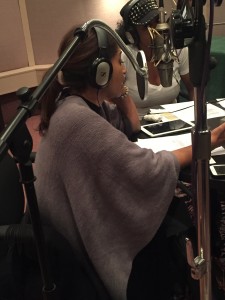 Brown receives a signal that the segment is running long. “We’ll talk more about this very serious issue after a musical break,” Brown announces. “This is ‘Beauty Is Only Skin Deep’ by the Temptations. You’re listening to Soul Sisters on Pure Soul Powered By Isaac Hayes on Dash Radio.” The song begins playing in Brown’s headphones and the women are off the air.

But in studio, the conversation continues. Brown asks the other women if they’ve ever binge-dieted. They both nod. Brown recalls visiting her father backstage in San Francisco when she weighed less than 100 pounds.

Related  No Big Whoop! Bakery Is Becoming Kind Of A Big Deal

“You know, Heather, my father asked me the same thing he asked you!” Brown recalls. Laughing, Hayes nods and adds, “And Mr. Brown did not mind telling you!”

Perfectly imitating her father’s raspy baritone, Brown says: “Yamma, you look a mess! What is wrong with you? Are you on drugs? Get her a steak!’ So, there I was at two o’clock in the morning and you know when you’re dieting and your stomach doesn’t feel right? But I was eating a steak with my father watching every bite!”

Brown recalls: “I can still hear him, ‘No man wants bunch of skin and bones!’ 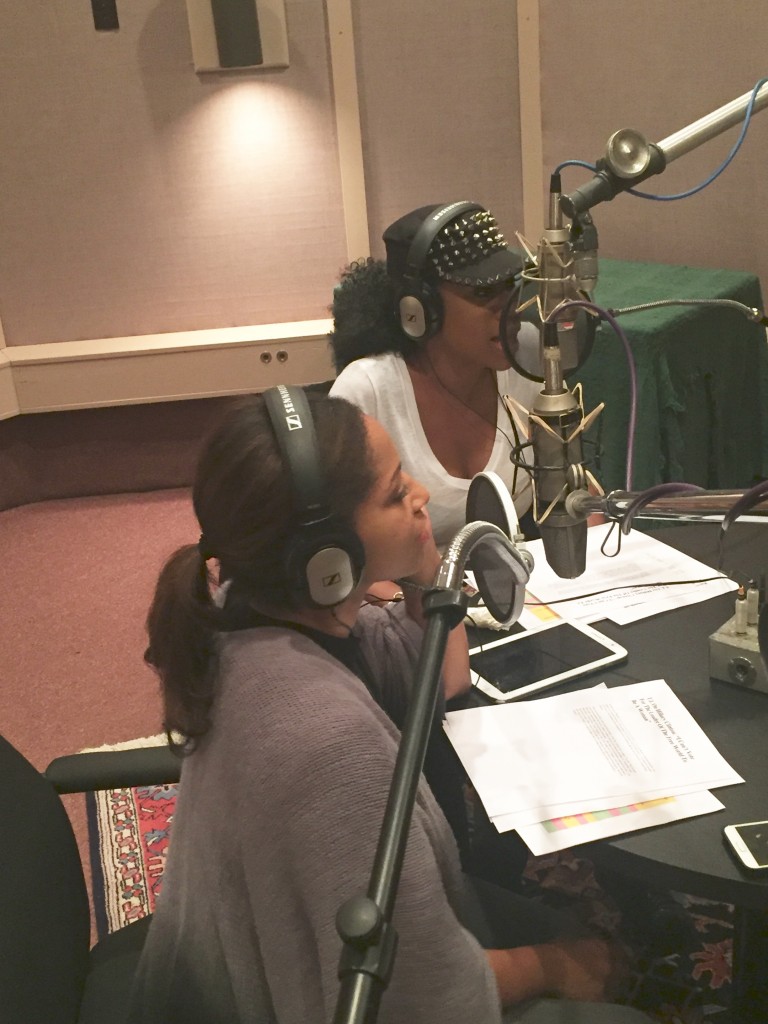 All three women laugh. As the children of a trio of iconic soul pioneers, Brown, Hayes and Jackson share a unique bond that crackles through the microphones. But unlike many wayward children of celebrities who keep TMZ in business, these three offspring with famous last names are both accomplished and intent on advancing the legacies of James Brown (who died in Atlanta at age 73 on Christmas Day 2006) and Isaac Hayes (who died in Memphis Aug 10, 2008 ten days before his 66th birthday) for a new generation of listeners. They’re toying with the idea of inviting Millie Jackson, now 71, in as a “Soul Sisters” guest too. 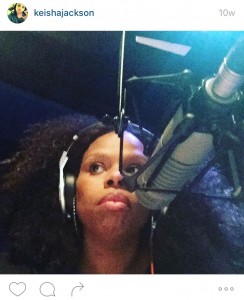 A few weeks later, back at the same circular table over a take out order of wings, Dr. Yamma Brown, Heather Hayes and Keisha Jackson, along with their producer Isaac Hayes III gather to discuss the origins of the “Soul Sisters” radio show. At first, being in the same room with these heirs of R&B royalty is a little unnerving. For starters, the genetics are unmistakable. Yamma Brown possesses her father’s laugh. Heather Hayes has her father’s eyes. Keisha Jackson could be her mother Millie Jackson’s photo double as she appeared on the cover of her 1973 classic LP “Hurts So Good.” And when Isaac Hayes III walks into the room, with his burnished bass voice, bald head and beard, he is the embodiment of cool personified on his father’s “Hot Buttered Soul” and “Black Moses” album covers from the 1960s and 70s. 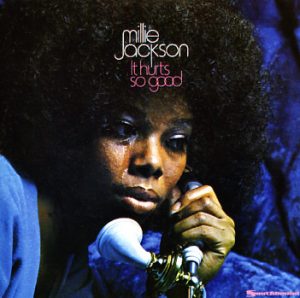 In addition to his own career as an Atlanta producer and songwriter, Isaac III also oversees his father’s musical legacy, including Dash Radio’s Pure Soul Powered By Isaac Hayes station. “We needed some original programming on the station and we were looking for something cool, something that listeners would gravitate to,” Isaac explains. “Heather and Yamma knew each other but they have very different personalities and Heather also knew Keisha from doing shows around Atlanta. I knew that given their lineage as direct descendants of iconic soul singers, together, these three could create a completely unique show.”

Adds Heather Hayes: “We just get each other because of who we are and how we all grew up. Keisha and I actually met through a Facebook post. Then we ended up talking on the phone and it was like we had known each other our whole lives. I actually knew Keisha’s mom before I met Keisha. I remember seeing Ms. Jackson one night in a comedy club and she comes up and says, “Heather, where’s your daddy? I’ve been trying to call him! I was like, ‘OK, I’ll tell him!’” Keisha laughs and adds, “That’s my mother!”

“Because she toured with my father, Heather was my road sister and my dad was her road dad,” Yamma Brown explains. “Even though I’m not in the music industry, it’s always going to be a part of my life. I’m just not going to be on stage in front of a mic. To be honest, I was a little apprehensive about doing radio at first. But it gives me a break from thinking about my patients and my professional life and I get to bring parts of my career to this show.” 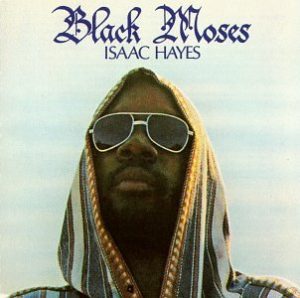 Between segments, the trio introduce classic tracks from their parents’ trailblazing musical library, tracks that laid the foundation for today’s hip hop and rap music. “It’s cool to be carrying on with the music in this way,” says Heather. Initially, I didn’t even know half of this stuff. Isaac is the family historian. He can hear a sample of dad’s from a mile away and say, ‘Hold up!’ Now, because of the Internet, people can look it up and find the original source. Back in the 1990s, practically every rap song had a James Brown sample in it. It didn’t become clear to a lot of listeners though until it became a money thing and he requested to be paid for using his music.” Adds Yamma: “Even today, a lot of artists don’t understand why they need to pay to use a sample. They think they’re paying homage to the artist and that’s enough. My father disagreed.”

And way back in 1979, when Merriam-Webster still defined the word rap as “talking freely and frankly,” Millie Jackson and Isaac Hayes, two of the genre’s pioneers, recorded an album together, “Royal Rappin’s.” Just don’t make their children listen to it. Keisha immediately scrunches up her nose when the album is mentioned. “That album is so country,” Jackson says laughing. “They recorded a duet of Anne Murray’s ‘You Needed Me.’ Really? Anne Murray? I just didn’t get it. It’s not my favorite Isaac Hayes or Millie Jackson album. It was cool though because it was a collaboration.”

Shaking her head, Heather adds, “I don’t want to think about my father as a sex symbol. For me, that’s eeeeeeew!”

In just the first three months of “Soul Sisters,” Dash Radio listeners are already making it must-hear radio. One fan, praising the often very real discussions that originate on air, has even described it as the equivalent of hanging out on a couch with her best girlfriends.

That doesn’t necessarily translate into a comfortable experience for the show’s producer who happens to be one of the co-host’s brothers. “They’ve given me a few moments back there behind the board, yes!” Isaac says laughing. “But I also recognize the importance of women talking about these topics. I’m also aware that all of us are representing individual brands, too. But then I remember that this makes for great radio. It’s always extremely entertaining. Thankfully, they haven’t gone all Howard Stern on me yet!”

Gathering up her notes for the next segment, Keisha wags a finger in Isaac’s direction and playfully warns, “Yet!”

Soul Sisters can be heard weekly each Thursday at 5 p.m. on Dash Radio’s Pure Soul Powered By Isaac Hayes station. The free streaming music service can accessed by downloading the Dash Radio app for Apple and Android products.