“The Best Teacher You Ever Had” : Tom Key Takes Audiences Inside The Mystical World of Buckminster Fuller

Tom Key is eternally grateful to his neighbors for not calling the cops this fall as he wandered his Oak Grove neighborhood, babbling aloud about geodesic domes and Dymaxion cars. This month, in perhaps his most ambitious one-man show yet, the iconic Atlanta actor is tackling the role of inventor, architect and Green Movement Godfather Buckminster Fuller in the current Theatrical Outfit production of “Buckminster Fuller: The History and Mystery of the Universe.”

“I tried my best to look like the benign scientist,” Tom Key explains laughing. “I would carry my script with me and hoped that people would put it together. It helps, too, if you smile at everyone. But if I hadn’t had my script with me, I probably would have needed bail money at some point.”

The synergist behind the geodesic dome (the most popular example perhaps is Disney’s Epcot theme park’s signature futuristic sphere) died in 1983 at age 87 but thanks to an ambitious script by D.W. Jacobs, Fuller’s philosophies spring to life anew in “Buckminster Fuller: The History and Mystery of the Universe.”

The play, running through October 25 at Theatrical Outfit downtown, represents a fresh challenge for Key who is celebrating his 20th anniversary this season as Theatrical Outfit’s artistic director.

Over mid-afternoon dessert at Sweet Hut Bakery & Café, Key discussed the rearrangement of his artistic atoms to portray the quirky scientific lecturer and why the nationally heralded actor is happy to continue to call Atlanta home after nearly 40 years on stage here.

Q: This fall, you were directing the Theatrical Outfit and Aurora Theatre co-production of the Broadway hit “Memphis” while simultaneously learning the script for Buckminster Fuller: The History and Mystery of the Universe.“ Those are a lot of gears to shift. How did you manage that?

A: Sometimes when you run a nonprofit theatre you have to make a bold, calculated leap for growth. The best way to do that was with this wonderful co-production with the Aurora Theatre. At the same time, however, I had to learn the longest one-person show I’ve ever attempted. It’s taken four months, working hours each day. But here’s the interesting thing I discovered. Being a director is an extraordinarily extroverted event. You have to think on your feet while there are 40 people in the room. You’re also inviting ideas and shaping things together. It’s this extroverted loud, chaotic event. But there was something beautiful about walking through my neighborhood for three or four hours a day and allowing my mind to meditate as I went over my lines. I have this method, SEWPR. It stands for Say it out loud 20 times. Emphasis different words. Write it out. Paraphrase it, put it in your own words. Review or rest. To go from that loud extroverted experience to that introverted solitude of contemplating the world was a great balance for me.

Q: Mr. Fuller departed this world in 1983 at age 87, I can’t think of a guy more far removed from Tom Key. What attracted you to this guy and this play, knowing that this is all on your back to make it work?

A: Oh, yes. But please let’s not dwell on that! Scripts tend to call to me like a friend in a way. Our managing director Lee Foster had seen the show in San Francisco and she told me about it. So I looked it up online and when I saw a photo of Buckminster Fuller, it just called to me. There was a soulful response. When I read the script, I was blown away. To your point, his scientific, inventive genius is not something we have in common. I know much more now about Vector Equilibrium and isotropic theory. It’s just unbelievable. I chart change through stories, literature and music while he saw it through science and faith. Why are we here and how are we going to be together? All of his ideas and inventions were contributions to humanity evolving on a global scale. Had they been accepted, his plans for modern housing and automobiles could have changed our planet. I find his ideas compelling and how they’re linked to his personal story quite thrilling. 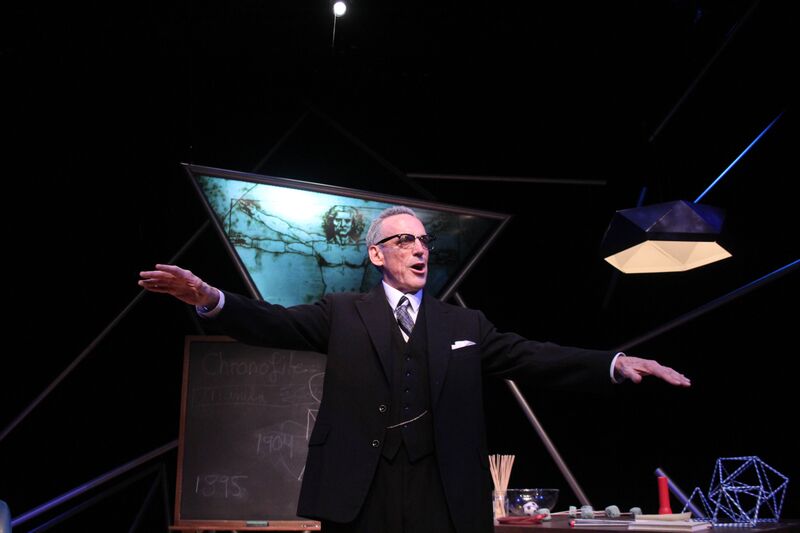 Q: This production is being staged in cooperation with Fuller’s estate. Despite his revolutionary ideas, this guy in 2015 is not a household name. Do you feel a responsibility to his legacy to push out his ideas and let people know that Fuller was indeed one of the founders of the Green Movement?

A: Yes, I absolutely do. Plus, what he has to say about economics and what can now be applied to absolute poverty and economic inequality and the violence that ensues because of that, well, he’s still teaching us things. And they’re lessons we still need to hear. This is a way to make him alive and present.

Q: How has your director David de Vries helped you locate this guy?

A: David is a brilliant director. It’s kind of like having a human app around you. You can ask, “David, what was the art like in this century?” and he immediately has an answer! His breadth and depth of knowledge is amazing and that’s incredibly useful for providing context to the actor. We also have a great history. He directed me in “Red” and in that production David helped me get to a whole new level as an actor. Our short hand and him providing context has been an immense help to me. David has helped me form a practical understanding of some of this extraordinary but extremely complex material. He’s helped me go step by step through this material, intellectually and theatrically.

Q: This is a multi-media production. Can you describe some of your visual co-stars up on stage with you? 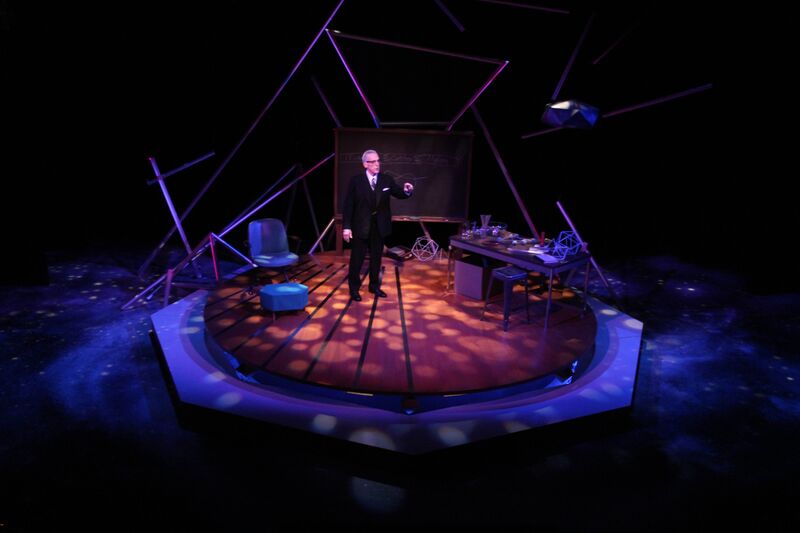 A: That’s a good way to put it. First of all, our set designers Isabel and Moriah Curley-Clay are geniuses. It’s so creative. When people enter, it’s the beginning of wonder, visually. And then the sound, everything from the sound of water to music composition to birds to a car honk washes over you. And then we have the Milky Way painted on the floor! Fuller was nearly blind so when I take off my glasses in the show, the lights change so that we see the world through Bucky’s eyes. The audience feels viscerally connected to him. Buckminster Fuller could hold a group of very committed scientists in his grasp for 18 hours straight but [playwright] D.W. Jacobs has fashioned something that is theatrically very, very sound and through our set and the visuals, the acting and the direction, we hopefully provide access to this man’s mind and heart. Our goal is to place the audience in the middle of a mystical experience, to experience the world as he experiences it.

Q: Fuller had this very distinctive way of dressing. He was fond of three-piece suits, bowties and wore a wristwatch on each wrist. How has his wardrobe helped you find Fuller? 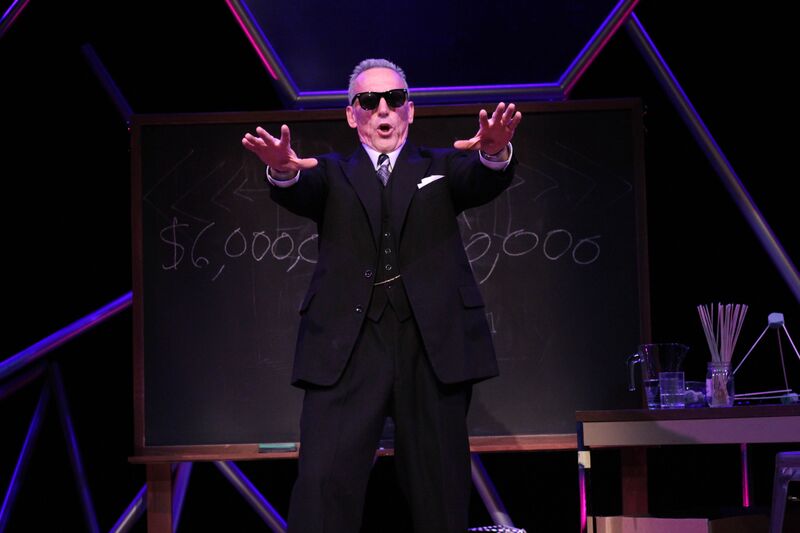 A: Our costume designer Linda Patterson actually found three watches for me. Bucky’s got a wristwatch for each wrist plus he’s got a pocket watch, just in case! The pocket watch has seven sides to it instead of being circular-shaped and the top is a triangle, which is a shape very important to him. My hair will be cut much shorter so I’ll appear a lot older. My eyeglasses prescription is being specially ground for Bucky’s frames as well. The lenses are thick as Coke bottles. Linda couldn’t find any suit in America that fit the bill in terms of period and authenticity so she expanded her search internationally and found the perfect three-piece suit in Germany. The suit is all wool and it’s just wonderful. He wears these black military-like shoes too. All of this is helps me, along with the audience, feel like we’re in his presence.

Q: Tom, this show isn’t exactly “Oklahoma.” What’s your pitch to the audience, to those of us who flunked science class repeatedly, why do we need to see Tom Key in this new play? 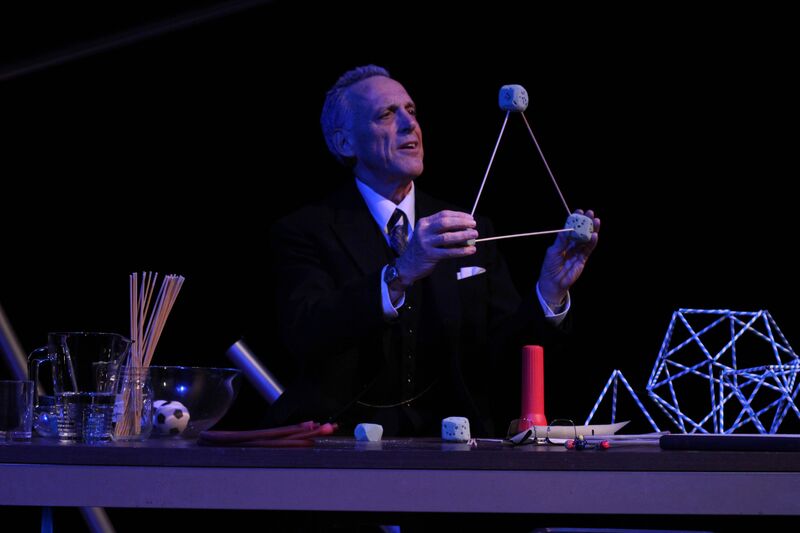 A: Think of the best, most captivating teacher you ever had in your life. That teacher you never wanted to stop being in a room with. That teacher you hoped would just keep on talking and sharing their wisdom with you. That’s what each performance of this play is all about. And you’ll be different as a result, I promise.

Q: You’ve now spent 20 years at Theatrical Outlet but you’ve been acting on Atlanta’s stages for nearly 40 years. Very early on, within weeks of landing in Atlanta, you received a job offer to return to New York. In 2015, are you happy you stayed and have become so ingrained in our city as one of our premier actors and directors? 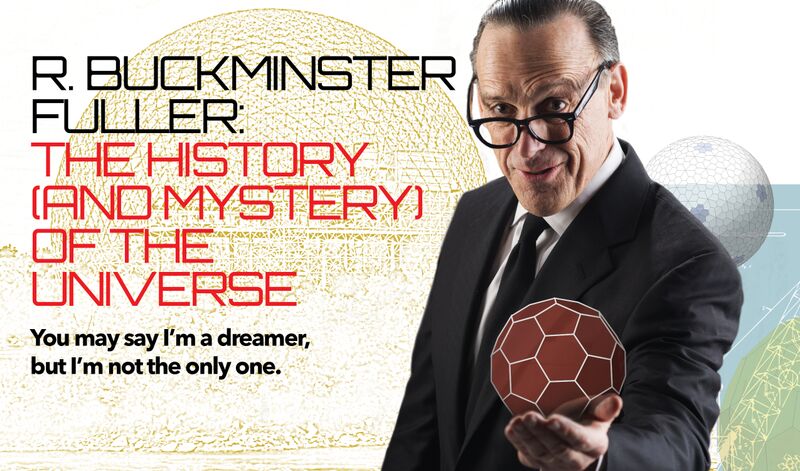 A: Yes and I’ll tell you why. I loved my time in New York and I love that city. But this is home. We lived here in the late 1970s and I worked at the Alliance and the Shakespeare Festival and then “Cotton Patch Gospel” took off. I had the opportunity to go back and I decided not to. New York is kind of like the state fair where you can look at all the prize tomatoes grown from across the state. But you don’t grow those tomatoes in the soil of that midway. They’re grown elsewhere. Because the south is my home, because I know the language here and the literature and the stories and music here, that’s what I wanted to give dramatic voice to. I’m part of a community here and it’s so much a part of me. I can’t think of a better place to do this work. I am constantly in a state of wonder here.

“Buckminster Fuller: The History and Mystery of the Universe” runs through October 25 at Theatrical Outfit downtown. Friday night’s October 16th performance will feature a post-performance talk back with Tom Key.

For tickets and more info, go to Theatrical Outfit’s website.