Bursting into a laugh over lunch on the patio at Inman Park’s Fritti, Meridith Ford is digging through her purse in a desperate search for something. Finally, a satisfied smile alights across her face as she produces a glossy new business card and slides it across the table. It reads: Novo Cucina, Meridith Ford, Gelataia/Marketing.

“It’s the most hilarious business card ever, but it’s accurate!” the former AJC dining critic explains. Yes, Meridith Ford is now on the other side of the spoon, working as chief gelato maker and restaurant PR representative for Sotto Sotto chef/owner Riccardo Ullio. The Italian chef’s mini Atlanta empire includes Fritti, Escorpion and the new Novo Cucina in Dunwoody, his first suburban location and where Ford currently spends her days playing gelato mad scientist.

Given that Ford’s former job was to criticize the Milan-born chef’s menu offerings, it’s an odd food pairing. “When I worked at the AJC, I would pick up the phone and Riccardo would be on the other end, shouting, ‘You don’t know anything about Balsamic vinegar!’” Ford recalls. “He would never hesitate to voice his opinion and I’ve never had a problem expressing mine.”

But the two had a mutual respect for each other and so when Ford was considering a new business venture last year, she asked Ullio for a consult. After politely informing her that her idea was “completely stupid,” Ullio invited her to come to work for him to do marketing for his restaurants — and to lend her Johnson & Wales pastry chef training to help him create a new line of hand-made gelatos for his new suburban concept. “Aside from teaching, I hadn’t been in a professional kitchen in 15 years,” explains Ford. “In many ways, Riccardo took a huge leap of faith on me. But it’s really worked out well.” 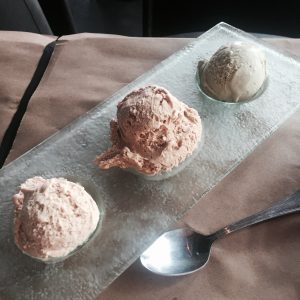 Ullio flew in world-class Italian gelato master Stefano Tarquinio from Bologna to train Ford. “He worked with me over four 14-hour days,” she says. “It was gelato boot camp. But when you’re using a $40,000 piece of equipment from Italy and using only expensive Italian ingredients to make each batch by hand, you don’t want somebody mucking things up.”

The investment paid off. Ford’s 18 flavors, including customer favorites Chocolate Chocolate Chip and Banana Pudding, are flying off the menu so quickly at Novo Cucina, a walk up window is being considered. Ullio is also carrying the gelato at his in-town Fritti and Sotto Sotto restaurants. 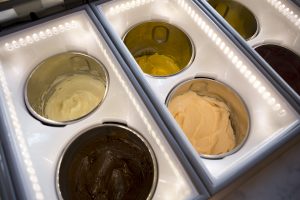 The notoriously traditional chef is giving Ford lots of creative freedom to develop flavors. “We’re talking about a man who, until he opened a restaurant in Dunwoody, never carried a California wine on his wine list,” Ford explains. “For him to allow me to create flavors that are not classically Italian is a huge deal.”

Steady sellers include Ford’s Pistachio, Hazelnut, Thin Mint, Almond Joy, Blueberry Cheesecake and Red Velvet Cake. In anticipation of fall, Ford is currently sweet-talking local farmers in order to secure early fruit to try an apple butter flavor. Fall Snickerdoodle and Pumpkin Cheesecake flavors have already been perfected. Ford has also whipped up a Cassata offering, based on a traditional Sicilian cake she used to crave as a pastry chef.

But Ford admits that attempting to please both OTP and ITP palettes can be challenging. Take her Fig Newton flavor. Please. “Since figs were in season, I made up batches of puree,” she says. Diners in the city loved the seasonal flavor. But in Dunwoody? Not so much. Reports Ford: “I tried candied fig, fig sorbet, Fig Newton. It just sat there. There’s still a lot to learn.” 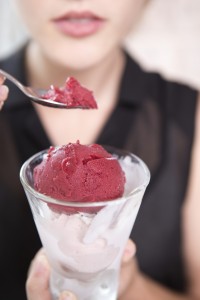 The former critic says the favorite part of her new venture is following an order of her gelato out to a table and watching diners dig in. “I haven’t watched a dish of it melt yet, thank God,” she reports. “People just keep on eating it.”

But the woman, who is immortalized with a crimson circle-and-slash NO MERIDITH FORD lifetime ban sign in the window of Nuevo Lardeo, says she’s steeled herself for her first negative review. “Of course, my feelings will be hurt,” she says.

But amateur Yelp citizen critics, beware: you’d best be accurate. Laughing, Ford says: “I can totally see myself on the phone, just like Riccardo, yelling, ‘You don’t know anything about gelato!’” 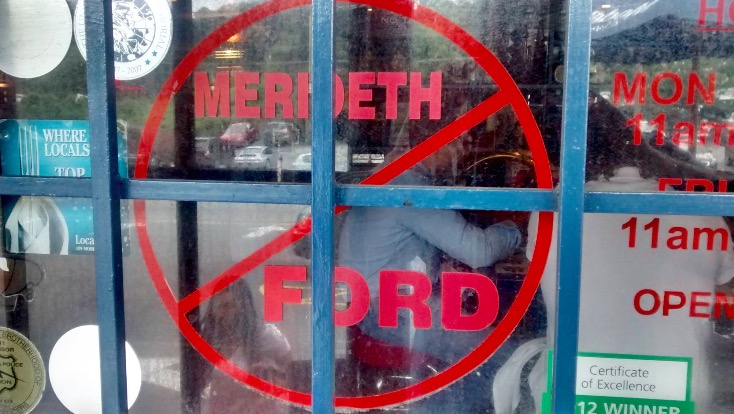