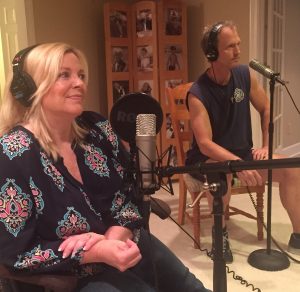 On this scorching hot August afternoon, iconic Atlanta morning radio voices Steve McCoy and Vikki Locke, along with daredevil sidekick Tom Sullivan are back behind microphones together, deep into a hilarious conversation involving the modern convenience that is Uber. Suddenly, a clap of thunder rattles everyone out of their chairs as a bolt of lightning strikes nearby.

“That’s one kick ass storm!” Sullivan exclaims. “Let me check the radar on the weather app on my phone. We might need to get down to the basement, Steve!”

Welcome to Steve McCoy, Vikki Locke and Tom Sullivan, version 3.0. The latest incarnation of the broadcast trio’s career together is a weekly podcast that longtime listeners and new fans can tune into via Spreaker (www.spreaker.com/user/stevemccoy) or the team’s Facebook page. The new version of the show satisfies longtime listeners even as it floats a trial balloon for a possible future for the team in the new frontier of streaming radio. The three friends meet up each week in McCoy’s Alpharetta basement (filled with celebrity autographed artifacts from his broadcast career, along with photos of his grandkids) where his neighbors include comic Jeff Foxworthy and baseball hall of famer John Smoltz.

But this is not your mama’s Steve and Vikki Show.

After nearly 30 years and memorable stints at Power 99, Star 94 and B98.5 FM together, McCoy and Locke are finally free to be themselves on-air with no filters. There are also no ratings to worry about, no consultants telling them to play more Justin Bieber and no rules. Currently, there are no paychecks either. McCoy serves as board operator and producer for the organic, free wheeling weekly exchange. 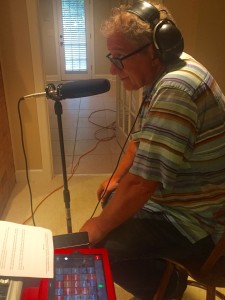 As the rain and hail viciously assault McCoy’s metal chimney outside, the racket is clearly coming through on the microphones. But inside of stopping the recording, McCoy keeps the session going, severe weather included.

Another clap of thunder rattles the house.

“Oh shit, that one hit the Foxworthy house!” cracks Sullivan. Riffs McCoy: “Jeff’s gonna have two fewer chickens when he gets home tonight.”

Locke almost levitates out of her chair laughing.

During a break in the recording session, Locke explains how the trio reunited. “It was Steve’s idea. We just missed working together. I missed my friends. I look forward to this each week.”

“It goes back to the chemistry that’s always existed between us,” McCoy says. “In radio, very few people can say they’re experienced the kind of chemistry we’ve been lucky enough to share for as many years. This is a fun way for us to keep that going for people who want to listen.”

Sullivan, who fills in as guest co-host at WXIA-TV’s “Atlanta & Company” these days in addition to doing charity work in Africa, says he didn’t hesitate for a second when McCoy called. “For me, it’s amazing to have an outlet again to express myself in my favorite profession. To be able to come back together again like old times and laugh together is what brings me back. It just feels good getting back out there with these two.”

Locke, who is now the L in LRK Media, a broadcast consulting company she formed in 2013 with PR maven Meg Reggie and veteran TV personality Kimberley Kennedy adds: “Nobody is telling us what to say, there’s no one in management breathing down our necks, saying, ‘Oh my God, you talked for more than 30 seconds.’ This is fun. There’s not a lot of fun in commercial radio in 2015.”

And while there are animated, PG-13-rated discussions involving boob sweat, penises and an occasional scatological reference that make it into this afternoon’s podcast, the three still informally abide by expectations from longtime listeners who tune in during their morning commutes. “I really thought we would swear more but we really haven’t,” Locke says. Counters Sullivan: “Well, we did on the first test show that we recorded together but the feedback we got from listeners was that it was a little jarring and sounded out of place coming from us. We respected that feedback. We don’t want to do it for shock value.”

Still, McCoy, who this March landed back on broadcast radio via News Radio 106.7 FM doing mornings with Cheryl White 5:30 to 9:00 weekdays, has discovered he has to watch what he says on-air now at his new paying gig. “Sometimes, I have to catch myself on the morning show,” McCoy explains. “For the past year, I’ve gotten so relaxed doing this podcast that I’ll venture into a story there and realize I can’t say the punchline on air!”

“Doing this is so freeing,” says Locke. “Like not wearing underwear,” cracks Sullivan.

For now, the trio’s not concerned about being compensated for doing the weekly podcast. “I’m sure if we went out and tried, we could sell it,” shrugs McCoy. “But we haven’t even tried. That’s not what this is about for me. When listeners say, ‘It’s so great hearing the three of you back together’ and we’re organically producing something that sounds smooth, that sounds like three old friends having fun, that’s everything to me.”

Welcome to Eldredge ATL: A Special Note To Readers