It’s just after 7:30 pm but downstairs, on the Hertz Stage of the Alliance Theatre, Atlanta actress Mary Lynn Owen has already retired into a pair of baggy plaid pajamas. “I’m kneading,” she explains, barefoot, standing center stage as she massages her scene partner, a stubbornly springy lump of bread dough. “It’s my favorite part,” she concedes conspiratorially to the rapt capacity audience. “It’s the only part I know how to do well.”

What follows for the next 80 minutes might be the single biggest solo act of bravery by an actor in the city’s current theater season. Written by Owen herself and based on her life growing up in the Atlanta suburbs of the late 1960s and early 1970s as a Cuban American girl and the daughter of a nomadic Methodist minister, “Knead,” now playing through Dec. 9, is a mesmerizing and haunting tour de force. 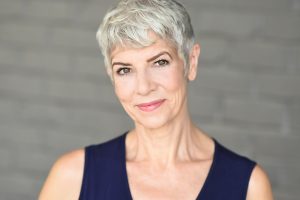 As Atlantans prepare for (not to mention brace for) another holiday season with loved ones, Owen’s beautiful vignettes speak to the universalities of family, what pulls and yanks us apart and what shapes and sticks us back together. Both the script and the performance are equal parts illuminating, heartbreaking and hilarious. Just like family.

“It’s the hardest role I’ve ever done,” says Owen. “In bread-making terms, we’ve done the shaping, the reshaping, the punching down and the baking. Now, we’re serving this to others.”

In a 39-year Atlanta acting career that’s netted her a pair of Suzi Bass Awards for “Wit” at The Aurora Theatre and for “The Little Foxes” at Marietta’s Theatre in the Square, “Knead” is Owen’s inaugural work as a playwright.

The ingredients that would become “Knead” were first introduced as a work produced for the Alliance Theatre Reiser Atlanta Artists Lab. As Alliance Theatre artistic director Susan V. Booth recalls in her note to patrons in the playbill, “The very first time she performed a draft of this piece, we asked [Mary Lynn] if she’d let us produce it at the Alliance.”

When Owen pulls a bowl of rising dough out of the refrigerator on stage, followed by a bright red child’s tricycle, the audience becomes acutely aware the character’s early morning baking session is about much more than conquering a complicated bread recipe. It’s about decoding, unlocking and revealing a half-century of family secrets and hidden truths.

And with a bag of flour, a spatula and a working oven as her co-stars, each night Owen attempts to bake loaves of bread in real time for the audience while simultaneously delivering an 80-minute highly personal monologue. Thankfully, Owen has longtime friend David de Vries (who is quite busy himself this month as Ebenezer Scrooge in the Alliance production of “A Christmas Carol” currently on stage at the Cobb Energy Centre) directing her. De Vries heard the first faint hints of what would eventually become “Knead” when Owen spoke at her mother’s 1995 funeral.

“This work has had quite the gestation period,” says de Vries. “When Mary Lynn’s mother Dahlia died, the bread making became her spiritual point of contact with her mother. When the idea sprung and I said, ‘What if you actually baked bread as you revealed these stories about your family?,’ there was an aha moment, not just for the novelty of it but for the structure it would provide the piece.”

Related  A One-Way Ticket To Palookaville With Jeremiah Parker Hobbs

Consequently, Owen wrote the play around the needs (and kneads) of her cast mate, down to how long it would take to bake and then cool the loaves before serving the bread live on stage. Theatre-goers will want to arrive 30 minutes before curtain, too. That’s when Owen takes to the stage (in her street clothes) to personally prep the dough for each performance. The idea for the prelude came from her husband, Atlanta actor Rob Cleveland, who last summer asked her why she intended to let the stage manager prep the dough: “Isn’t that kind of like letting someone else pack your parachute when you’re about to jump out of a plane?” Owen immediately called de Vries and suggested she prep her own bread dough before each performance.

So far, it’s been cooperating,” Owen says with a laugh. “The dough has been a very good scene partner. It would like, however, a little more rising time. We’ve been through a lot of rehearsal together. It’s almost like a pet at this point!”

In order for Owen to rehearse properly, de Vries put in a request for a working oven both on stage and in the rehearsal space for Owen.

“In 50 years, this may be a first for the Alliance!” says de Vries. “It wasn’t easy. The technical staff really had to jump through some hoops to make this happen. I think everything in the building, aside from certain lighting requirements, is [wired for] 110 volts and we needed a 220-volt working stove in the rehearsal hall and on stage. But how else can you rehearse a play about baking bread?”

Costume designer April Andrew also had to field a unique request from “Knead’s” star as well – pajamas with back pockets. “I had to find a few unique ways to get all the dough off my hands,” explains Owen. “But I have to say, pajamas are my ideal costume. Barefoot and in pajamas. I don’t have to do any make up and I just have to make my hair look disheveled. It’s very actor friendly.”

What’s less actor friendly is what the script requests of Owen each night. “Let’s say I frequently got mad at the playwright,” says Owen. But serving as both actor and playwright yielded other revelations for Owen as well. “We were in our second or third preview [performance] and I decided to reinsert a section I had taken out. I told David, ‘The actress part of me is no longing speaking to me but the playwright part of me is saying this needs to go back in. The actress, who has to deliver the material, meanwhile, is saying, ‘Are you crazy?’ I have a real empathy now for both sides. I’ve been in a new play where the playwright comes in and says, ‘I have some changes’ and the actors then have to white knuckle their way through it. But now, I also understand why the writer wants the words to be as strong as they can be.”

Related  With His Debut Novel, 'All About The Benjamins,' Zev Good Writes About All of Us

Playing such sensitive and autobiographical material each night required direction from a friend you’re trusted for decades, too. Says de Vries: “Because we know each other so well, I’m able to say, ‘I’m not buying that.’ And she’s totally cool with that because she wants me to shepherd her truthfully through the experience. She’ll ask, ‘Which way do you want me to play it?’ and I’ll say, ‘Why not one way on Tuesday and the other way on Thursday? They both work. They’re both versions of the truth.’ A performer, particularly a solo performer, needs to have that element of jazz and spontaneity that allows her to play a little bit.”

Adds Owen: “David is like a triple threat. He’s an actor, he’s a wonderful editor, who guided the writing and a friend who knows me so well and has had a front seat for many of the events in the play. An old friend knows what matters. The play wouldn’t exist if not for him.”

And when the going gets emotionally treacherous each night on stage up there all alone, Owen relies on one piece of direction de Vries gave her in particular: “He said, ‘You don’t have to relive anything. This is reportage. Just report back.’ And he’s right. That’s how these moments are best told.” Adding to her onstage rooting section each night scattered strategically around the kitchen set are framed photos of her family from her real kitchen, the same ceramic tiles from her sink backsplash at home and a wooden spoon made by her wood carver husband.

“These are painful stories,” says de Vries. “She’s a very courageous lady, both on stage and off. But on stage, as Mary Lynn is displaying this remarkable courage, it’s also a terrifying experience for her. She’s out there, all alone, revealing these incredibly difficult experiences. Even after seeing it so many times, as an actor and an audience member, there are so many moments that just punch me in the gut.” 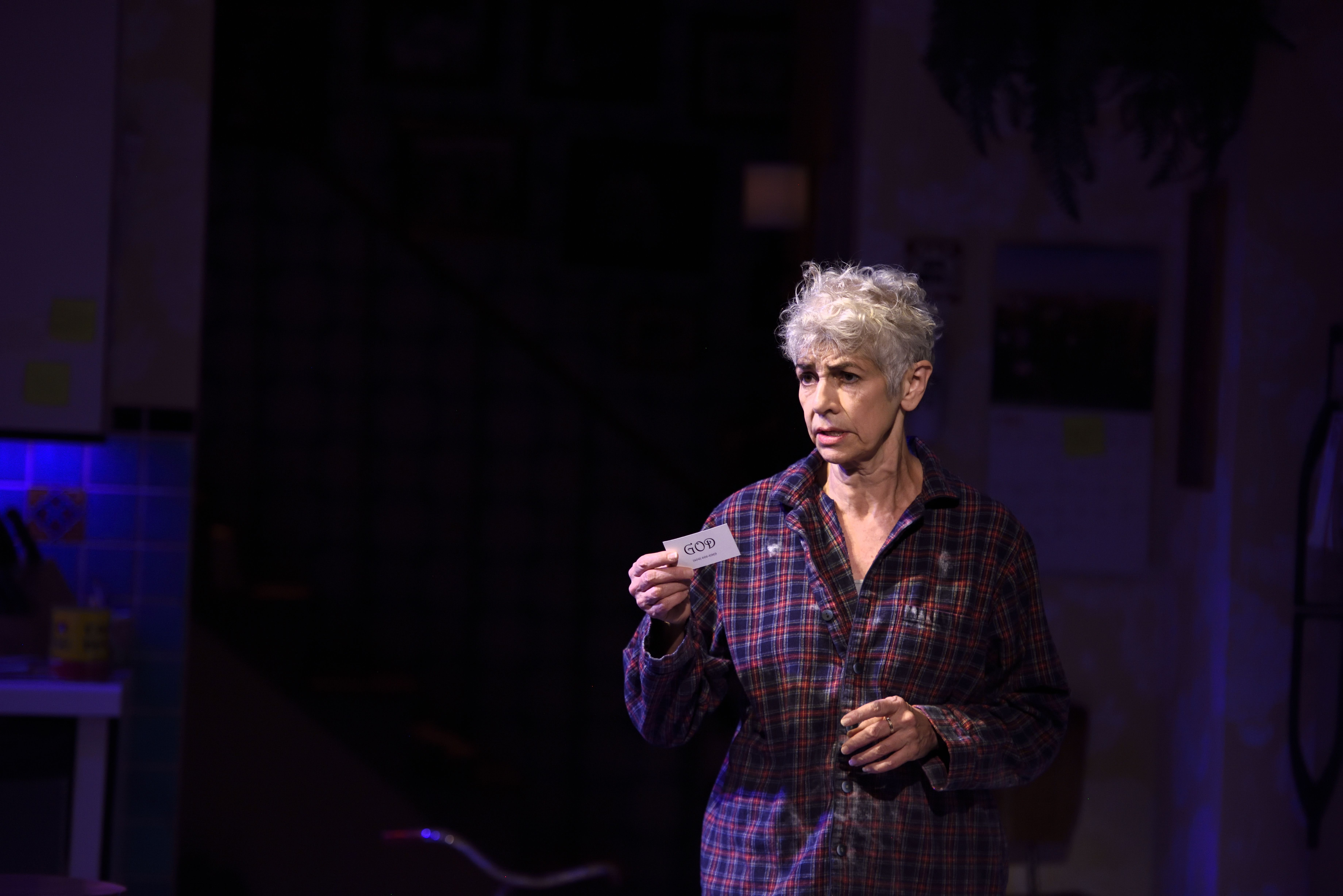 But for Owen, navigating all the emotional tripwires in her script are worth it each night because she’s spending time with family. “Yes, there’s pain but there’s a lot of joy in this play, too,” she explains. “I get to, in a sense, bring people back to life. I get to relish them and I’ve gained a whole new respect for them as well. They’re living on in this piece and people are responding to them each night. It just shows me how multi-dimensional they were. They were really extraordinary people. And now, I get to share my family with others.”

“Knead,” written by and starring Mary Lynn Owen and directed by David de Vries runs on the Hertz Stage at the Alliance Theatre through Dec. 9. For tickets, click here.